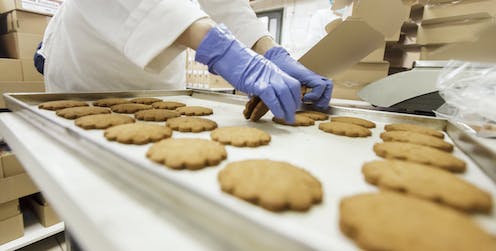 Inflation and sluggish wage growth[1] have raised concerns that wages and salaries are becoming an increasing smaller share of national income.

Australian Council of Trade Unions head Sally McManus has said labour’s share of income is at its lowest point since 1960[2] – “a shameful situation for us to be in as a country”.

Read more: There's an obvious reason wages aren't growing, but you won't hear it from Treasury or the Reserve Bank[3]

To get a perspective on this, we looked at how the labour share has evolved in Australia since the 1860s.

Our results show labour’s share of national income has indeed declined since the 1970s, but there is no sense of any permanent trend. Over the past 160 years, despite massive growth and social change, labour’s share seems to have been remarkably resilient.

In 1860 the Australian economy revolved mainly around the production wool, wheat and gold. In the 1850s, Victoria produced more than a third[4] of the world’s gold. So our data effectively covers the entire history of Australia since the birth of modern manufacturing.

Our graph shows labour income divided by national income, which we refer to as “labour’s share of income”.

The ratio of these two values is the proportion of income being paid to labour, with the remainder being earned by land rents and returns to capital, such as retained profits or dividends.

The proportion can exceed 100% when profits are negative, as they did in the Great Depression in the 1930s.

The graph shows labour’s share peaking in the mid-1970s, and declining since. Before then, the impression is that labour’s share of income has cycled around a constant value – about 80% – with no clear trend or shift.

This constancy is remarkable when considered against the massive social and economic changes that have occurred over the past 160 years.

In that time, Australia has experienced the industrial revolution and the information revolution; major depressions in the 1890s, 1921 and 1930s; two world wars; massive postwar migration; the rise of the female workforce; and globalisation.

Yet none of these technological, economic or institutional changes appears to have any significant permanent effect on the distribution of income between labour and capital.

Labour’s share of Australia’s economic growth over the past 160 years of economic growth has been more or less constant. When there has been productivity growth and GDP growth, wages have grown in tandem.

However, there have been significant changes at medium-term frequencies of ten to 20 years. These cycles generally reflect major recessions.

One explanation for this is that in a recession, when sales fall, employers cannot easily shed labour or reduce wages. Consequently, dividends and other payments to the owners of capital fall faster than the wage bill.

Paradoxically, therefore, a high labour share could be bad news for labour in the sense that it is associated with periods of high unemployment.

This provides a caution that increasing the share is not itself an objective, and there may be good reasons not to be too concerned about a decline in the share going to labour, depending on the cause.

Labour’s declining share since the 1970s is part of a global trend[5]. Some attribute this to an inevitable consequence of economic growth, capital accumulation, technical change and automation.

In Australia’s case is has been attributed to two main changes: cycles in the mining sector, and the changes in financial services.

Mining is very capital-intensive, so capital’s share of income tends to rise and fall along with energy and resource prices. This is a cyclical effect that will likely reverse itself in time.

Mining is capital-intensive, so a lower share of income goes to labour. Shutterstock

In theory, automation and ongoing labour-saving technological change could continue to reduce labour’s income share in this way. There is some evidence[6] this has been occurring globally across many sectors in recent years.

However, when viewed against the backdrop of 160 years of growth, we see no evidence that the massive labour-saving technologies of the past had any permanent effect of labour share.

Read more: The concept of class is often avoided in public debate, but it's essential for understanding inequality[7]

The past does not necessarily predict the future. But it does suggest that labour’s share of income is remarkably robust to many types of institutional and economic change in the longer term.

Shocks have caused changes in the distribution of incomes in the short to medium term, but these have been self-correcting.