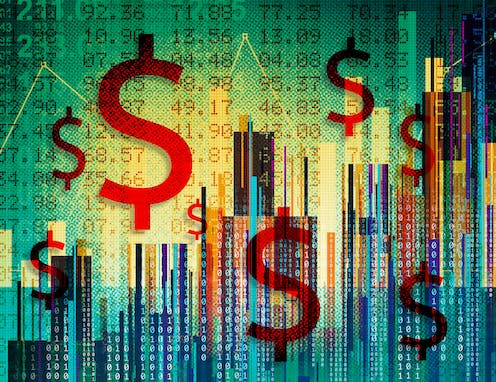 Record profits reported by banks[1], fuel retailers[2], energy companies[3] and other businesses[4] at a time many New Zealanders are struggling to make ends meet[5] have seen people asking whether it’s time to introduce a “windfall tax” – to be triggered whenever an industry has made “too much profit”.

But what is a windfall tax? How much is “too much profit”? And do windfall taxes actually work? History, it turns out, can tell us a little about taxing a windfall.

A windfall is simply a large amount of money that is received unexpectedly. A windfall tax is a targeted tax on unexpected gains that result from market circumstances rather than any action taken by a firm or industry. It’s not a tax on profits resulting from innovation, entrepreneurship or insightful business decisions.

An element of windfall exists in the banks’ overestimation of COVID-related losses that didn’t eventuate, under investment in generating capacity in the electricity industry, and Russia’s invasion of Ukraine causing oil shortages.

Theoretically, a windfall profit is more than what is normally required to reward shareholders for their investment, and more than what a company would need to be encouraged to invest in technology and innovation[6].

Windfall taxes are on “excess profits”. They’re also not something that can be predicted and therefore incorporated in regulation.

How much is too much profit?

Recent reports of exceptionally high corporate profits have been met with accusations of profiteering at the expense of consumers.

Among the more egregious examples are the profits of oil giants BP and Shell, which reported global profits of £7.1 billion (NZ$13.7 billion) and £8.2 billion (NZ$15.8 billion) respectively in the three months to September.

Higher profits generally result in larger dividends to shareholders. While some may argue that is the shareholders’ reward for their investment risk, the result is still some transfer of wealth from those who have the least (poorer consumers) to those who have more (shareholders).

It could be argued that where there is negative social impact from excess profits – people unable to use their car because the price of fuel is too high, for example – that some intervention is acceptable.

The history of windfall taxes

Windfall taxes have a long history. A version was applied to UK munitions manufacturers[8] who made large profits from the first world war. New Zealand also introduced an “excess profits duty” in 1916 to help fund the cost of the war.

More recently, an excess profits tax[9] was imposed on banks in the UK in 1981, when the banks were benefiting from high interest rates. And in the US in the 1980s, the federal government imposed windfall taxes on oil companies[10] as price controls were phased out.

Again in the UK, in 1997 a windfall tax was imposed on privatised utility companies[11]. One of the factors driving this was a view that the companies were under-regulated during their initial years in the private sector (note the similar claim made recently about New Zealand’s electricity sector). The government argued efficient regulation would support competition that would minimise the opportunity for excess profits.

A more recent example can be seen in the UK with the introduction of a “temporary, targeted energy profits levy[12]” – essentially a windfall tax – in May this year.

One aim of a windfall tax is to discourage firms from overcharging customers. However, where a firm has significant market power, they may be able to pass the tax on to customers.

There is also the potential the tax could result in reduced investment, which is why the UK tax announced this year has the accompanying tax relief for new investment[13].

One benefit of a windfall tax is increased government revenue. Earlier windfall taxes intended to raise money for war efforts achieved their objectives. But larger companies became skilled at avoiding them over time.

Read more: Corporations want to profit from the world’s problems – here’s how they can solve them instead[14]

More recent windfall taxes have not been as successful as anticipated. The US tax on oil in the 1980s is often given as an example of unintended consequences: there was reduced domestic oil production and increased reliance on overseas oil. However, at least some of the failure can be attributed to poor tax design.

A windfall tax is more likely to be successful if it is actually taxing a windfall. But this is not a tax that would be simple to implement. Determining the excess profit is likely to be complex. A time frame for the tax would also need to be determined – a windfall tax should not be permanent.

Finally, there is a general reluctance in New Zealand to use the tax system in an ad hoc way. There is a specific process intended to ensure effective tax policy development. Even if the usual consultation process is bypassed, change is unlikely to be fast.

Another option to minimise excess profits is to introduce a price cap, which sets a maximum price that can be charged for a product or service.

Recently, 15 member states asked the European Union to impose a cap on gas bills[15] to slow rapidly increasing prices. But price caps are infrequently used, as they distort price signals that help determine supply and demand – a crucial component of a well-functioning market.

In the end, windfall taxes can be beneficial. But they are contentious due to the different priorities of shareholders, companies and consumers.

If we’re concerned about inequality and further transfers of wealth away from those who have the least, however, windfall taxes are – at a minimum – worthy of greater consideration.