The supermarket giant Woolworths this week broke ranks and announced it was going to stop selling A$1 per litre milk. It will now charge A$1.10, or A$2.20 for two litres[1].

Chief executive Brad Banducci made it clear that there was more to the decision[2] than straightforward economics:

We’ve heard the outlook will continue to be extremely tough for dairy farmers… This is affecting milk production and farm viability, which is devastating for farmers and the regional communities in which they live.

The Labor Party has been threatening to impose a minimum farm-gate price[3].

Will what Woolworths is doing help farmers? Only a bit.

The so-called “milk wars” began on Australia Day 2011 when Coles announced it was cutting milk prices to A$1 a litre[4].

The milk market does not just consist of dairy farmers, supermarkets and customers. There are also the processors – companies such as the ASX-listed Murray Goulburn, Parmalat, Lion and Fonterra – that stand between farmers and supermarkets. Then there is the international market for dairy products like butter, cheese and milk powder.

The biggest determinant of farm gate prices in Australia is not what the major supermarkets do, but world dairy prices.

The Department of Agriculture[5] says 37% of Australian milk production is exported.

Add to that the roughly 35% that goes into locally consumed butter, cheese and milk powder that is subject to competition from imports. You can quickly see the prices of nearly three-quarters of the milk produced in Australia are set globally.

Dairy Australia[6] has a higher estimate. Because even fresh milk is subject to foreign competition, it believes 90% of the annual movement in farm-gate prices comes from changes in international prices.

Those changes are beyond the effective control of Australian farmers and regulators.

Many of them are the result of changes in the exchange rate. 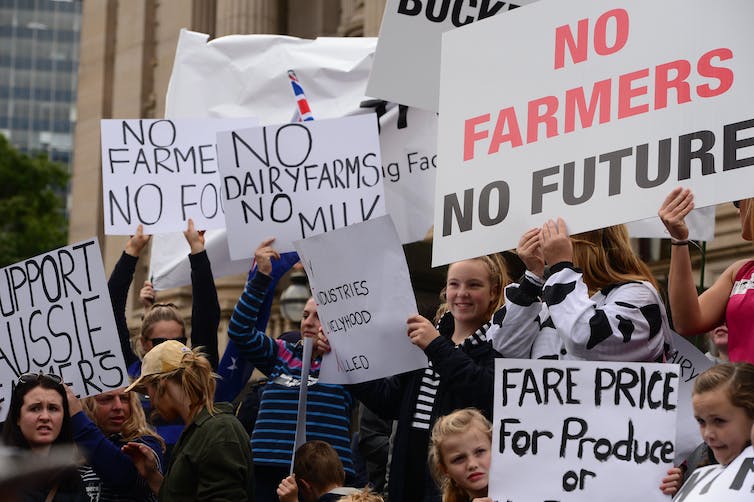 Farmers have been angry at Coles and Woolworths for squeezing prices. Protest rally in Melbourne, 2016. Mal Fairclough/AAP

Processors get the cream

It is tempting to think an increase in retail prices, like the Woolworths 10 cents, would help farmers. But it normally wouldn’t, much.

Someone between the cow and the customer would get the 10 cents, but not necessarily the farmer.

When the Australian Competition and Consumer Commission[7] examined the dairy industry last year it:

did not obtain any evidence that supermarket pricing, including $1 per litre milk, has a direct impact on farm-gate prices

Further, farmers’ lack of bargaining power means they are unlikely to benefit from an increase in the retail (or wholesale) prices of private label milk or other dairy products

Even if processors were to receive higher wholesale prices from sales to supermarkets, this does not mean the processors will pay farmers any more than they have to.

This time it will be different. Woolworths says “every cent of the increase will end up with Australian dairy farmers”. The processors have guaranteed it[8].

Normally there would be no guarantee that an increase in the wholesale price would flow through to farmers. The processors could pocket it, and the inefficient ones could use it to stay in business, to the long-term detriment of customers.

Consumers are at one end of the line…

Banducci said Woolworths was “acutely aware of the budgetary pressures facing many of our customers and have not taken this decision lightly”.

He is right to recognise it will hurt customers.

It won’t, mind you, hurt customers who buy branded milk like a2 – whose marketing success under chief executive Jayne Hrdlicka[9] has pushed the value of the company to A$10 billion[10], making it bigger than Lendlease, Medibank Private, the AMP and Coca-Cola Amatil. Not bad for a company that didn’t exist at the turn of the century.

Instead it will hurt customers who can afford it the least. For a typical family of four with average milk consumption[11], the extra 10 cents a litre works out at about A$40 a year.

…and farmers at the other

Dairy farming is difficult, and much of Australia is less than ideally suited to it. Farmers have to contend with volatile prices, drought and isolation.

They are the least powerful players in the “value chain” that runs from cows to customers via importers, processors and supermarkets.

Neither government intervention nor higher retail prices can do much to help them.