Derided[1] as “gimmicky” and lauded as “unquestionably efficient”, the battery-powered WiFi-connected gizmos were launched in March 2015[2]. About the size of a packet of chewing gum, they enable Amazon Prime customers to instantly order particular items at the push of a button.

More than 300 different buttons[4] are now available for specific branded products such as coffee, washing powder, energy drinks, tissues and confectionery. Amazon sells thousands of the buttons every day – for US$4.99 – and those buttons in turn ensure customers keep buying consumable items from Amazon.

But in Germany, Amazon’s second-largest market[5] after the US, Dash Buttons have been deemed illegal.

There’s a good chance they might suffer the same fate in Australia.

In January 2019 a German court ruled[6] that Dash Buttons violated a law based on European Union consumer rights directives.

The relevant directive[7] requires pre-contractual disclosure of details about goods being sold. It says an online vendor must make the consumer aware of basic information – such as product characteristics, price and terms of sale – immediately before they place their order.

The directive is not binding and so must be implemented through a nation’s domestic law. The Higher Regional Court of Munich[8] ruled that the German law implementing the directive requires “buttons” that can process orders to be labelled with the words “order to pay” or “similarly unambiguous” wording.

Amazon Dash Buttons are marked solely with the brand name and/or logo they order. As such, they have been banned from sale and use in Germany. 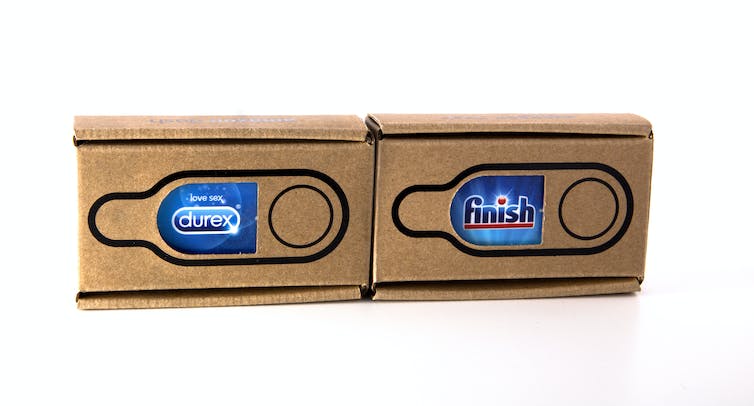 More than 300 different Dash Buttons are available for consumable products you might want to restock regularly. www.shutterstock.com

Dash Buttons might similarly contravene consumer protection laws in Australia, where they have been available since June 2018[9].

Section 18[10] of the Competition and Consumer Act (2010) prohibits people (including companies) engaged in trade or commerce from misleading or deceiving others, intentionally or otherwise.

According to the Federal Court of Australia[11], whether a person has breached Section 18 requires an objective analysis of all the relevant facts and circumstances. The person’s conduct only needs to be reasonably capable[12] of misleading or deceiving someone - evidence that a member of the public has actually been misled is relevant but not conclusive.

As mentioned, Dash Buttons provide no information about the nature of a product or its pricing when pushed. Consumers could potentially be stung by sudden price hikes for specific products or increases in delivery charges. They might be unaware of sudden and significant changes to products (such as Cadbury’s announcement earlier this month[13] it is reducing the size of its chocolate blocks).

Pushing a Dash Button one day might deliver something different than pressing it the day before. Any of these changes will be invisible. You will know nothing until the sale is processed.

Read more: I studied buttons for 7 years and learned these 5 lessons about how and why people push them[14]

Amazon is an American company, headquartered in Seattle, Washington. The company’s conditions of use[15] state that you subscribe to US federal and Washington state laws when using the Amazon Dash service.

At first glance, this means Australian consumer laws do not apply to sales processed in the US. Indeed, international law[16] prohibits a country from applying its law in another country without permission. Australia can’t force its consumer laws to apply in the US or vice versa.

However, where a company sells products in another country, it voluntarily subscribes to that country’s laws.

Section 131[17] of Australia’s Competition and Consumer Act 2010 purports to apply Australian consumer law[18] to foreign corporations. But for years it was uncertain if consumer laws applied to online sellers with no physical presence in Australia.

In 2016, however the Federal Court ended lingering doubt[19] by confirming that Australian consumer laws can bind foreign companies selling products online in Australia, even where they operate predominantly outside of Australia and stipulate the laws of another country apply to their transactions.

In this case the ACCC took Valve Corporation, a US video game distributor, to court for refusing to refund a Tasmanian man for games he bought that did not work. The company had refused the refunds on the grounds it was not bound by Australian consumer laws.

What this means is that Amazon could indeed be caught by Australian consumer laws. Its Dash Buttons could be deemed misleading or deceptive under Section 18.

It will take a test case from the Australian Competition and Consumer Commission (ACCC) to decide the issue.

If the competition watchdog did successfully challenge the legality of Dash Buttons, the Federal Court could then ban their sale in Australia. It might require Amazon to change how it markets products with Dash Buttons.

The consequences of the buttons being deemed illegal could be very significant for Amazon, now the world’s biggest public company[20] with a market capitalisation of about US$800 billion.

Although official figures haven’t been released, the company claimed[21] in April 2017 that four orders a minute – about 5,760 a day – were placed using Dash Buttons.

Even if the sales lost as a result of an unfavourable court ruling comprise only a fraction of the company’s revenue, Dash Buttons have other great value to the company. They are a crucial way to gather the consumer information[22] the company wants to increase its market share.

Amazon has unsurprisingly slammed[24] the German ruling as “hostile to innovation”, and is planning to challenge it.

But it’s possible it might just end up pushing the wrong buttons.