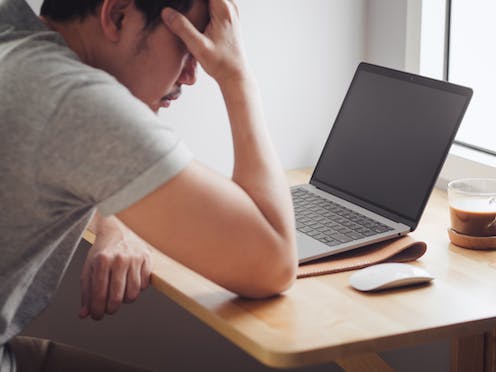 As workplaces become increasingly[1] difficult and damaging environments, there are plenty of articles[2] and books[3] on dealing with “psychopaths” among your colleagues.

But psychopathy is heavily contested[4] as a diagnostic category. And labelling a coworker a psychopath fails to account for how our workplaces can encourage bad behaviour.

From an “always on[5]” work culture to badly designed work practices, there are many reasons why a colleague could be behaving badly. This is partly why clinicians are prohibited[6] from diagnosing someone from afar - there may be many other factors influencing the behaviour.

Read more: Psychopaths versus sociopaths: what is the difference?[7]

The research on criminal psychopathy is based on thousands of cases[8] and involves statistical prediction of future actions based on these cases. The articles[9] that set out how to tell if your boss is a psychopath simply do not have the same evidence base.

Of the 20 criteria[10] used to assess criminal psychopathy, many do not translate to the workplace (other measures[11] have not been tested in work environments either).

As we have seen in recent sexual harassment scandals in media[12] and politics[13], when workplaces don’t punish employees for unacceptable or harmful behaviour it gives tacit permission[14], in effect encouraging it to continue.

Individuals behaving badly are often oblivious to the impact they are having, and so without proper sanctions and containment remain unaware of the need to self-correct. But there are also specific aspects of our workplaces that may contribute to such problematic behaviour.

People’s personalities aren’t fixed[15], which means that some human resources tools, such as testing for “emotional intelligence[16]” (also known as EQ), may actually incentivise people to become more skilful at manipulating others’ emotions.

If someone is hired or promoted because they are very good at impression management and manipulation, they are likely to be very effective at making their managers believe they are doing a good job while also bullying their peers and subordinates.

Read more: Emotionally intelligent employees may come with a dark side – manipulation[17]

As a result, coworkers’ coping strategies (including changing the way we think about a situation, using humour, or focusing on solving problems) become overwhelmed[21]. This leaves them less able to attend to the day-to-day normal pressures of work, and to regulate their own social behaviours effectively.

In other words, bad behaviour in the workplace could be linked to fatigue, rather than to an aspect of a person’s character.

Distress caused by difficult social contexts can also lead to “dissociation”[22]. Dissociation is a self-protective mechanism that enables people to cut themselves off from their feelings of distress. But it can be experienced by others as coldness or a lack of empathy.

Read more: Understanding others' feelings: what is empathy and why do we need it?[23]

Instead of miscategorising these distressed people as psychopathic, we need to better understand and recognise[24] early indicators of reactions that need care.

To be accurately used in a workplace, the term “psychopathy” would require collecting data on thousands of cases of employees and examining variables that predict, for example, bullying, harassment, fraud, and other counterproductive work behaviours. This research does exist[25], but it is preliminary and needs replication with much larger samples.

But more profoundly, this distracts us from what we should be doing: making our workplaces better places to be. This will come from careful attention to the way that structures and practices feed unfairness and bring out the worst in us.

Instead of developing new ways of scapegoating each other with psychological concepts, we need to create environments that take care of our need to belong[26] and to be appreciated[27] for our contributions.

And finally, if you are really drawn to labelling a colleague a psychopath, you should perhaps also consider the question “is it me?”. There is substantial psychological evidence[28] that judgement about the actions of others are usually harsher than our judgement of our own actions - even when they are the same actions.

Labelling someone a psychopath makes the issue about the individual, rather than focusing on what the organisational factors are that are contributing to the behaviour.