David Malpass[2] is currently Under Secretary of the United States Treasury with responsibility for International Affairs, and his previous experience includes being chief economist at Bear Stearns prior to their collapse.

Our Treasurers support is wrong headed.

No matter what the strengths of David Malpass, the next World Bank President should not be American.

This cosy arrangement was fine for most of the 20th century, but is at odds with our 21st century world. 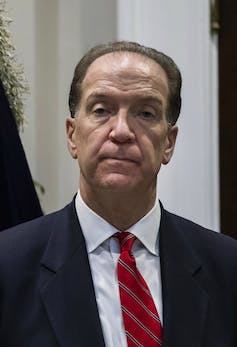 It has been suggested that Trump would follow his usual negotiating tactics and withdraw support from the World Bank if the next chief is not American, which is presumably why some countries including Australia are likely to support Malpass.

The search for the US nomination was headed by Steven Mnuchin and Ivanka Trump, with Invanka Trump herself mentioned as a possible nomination[3].

Malpass may be a better candidate than the President’s daughter, but I doubt it.

Malpass has been a critic of World Bank lending to China and at Bear Stearns he ignored warning signs of crisis in 2007.

But it’s not so much Malpass’ dubious credibility that is the problem, but the idea that the President should always be American.

Important global institutions should be led by the best candidate. The views and expertise of emerging market candidates, particularly from larger economies such as China, India, Brazil, Nigeria and Indonesia should be taken more seriously.

In recent years the IMF would have been much better led by a non-European. The decision to bail out French and German banks at the expense of the Greek economy in 2012 was a poor decision made by the French head of the IMF.

The IMF rightly supported restructuring of banks and financial markets after the Asian Financial Crisis in 1997, but did not push for the same for European or US banks after 2008.

So what if Australia and other middle powers did not support Malpass’ nomination?

Better off withoug the World Bank?

A US withdrawal from the World Bank would probably see its demise. But so what?

And this is the point. China needs to be brought into the World Bank and other institutions more fully, not sidelined.

Read more: A Trump-aligned World Bank may be bad for climate action and trade, but good for Chinese ambitions[4]

Problems with governance and other issues with China’s Belt and Road initiative would be much better handled by a multilateral agency, whether that is a properly renewed World Bank or a new institution.