The Reserve Bank kicks off its first meeting for the year next Tuesday facing the same dilemma it did throughout last year.

It hasn’t got easier.

The bank has a very public, fairly clear objective: to keep inflation between 2% and 3%[1]. But it keeps missing it. Over and over and over again, and on the downside.

As the following chart shows, inflation has been below the bank’s target band for nearly all of the past four years. 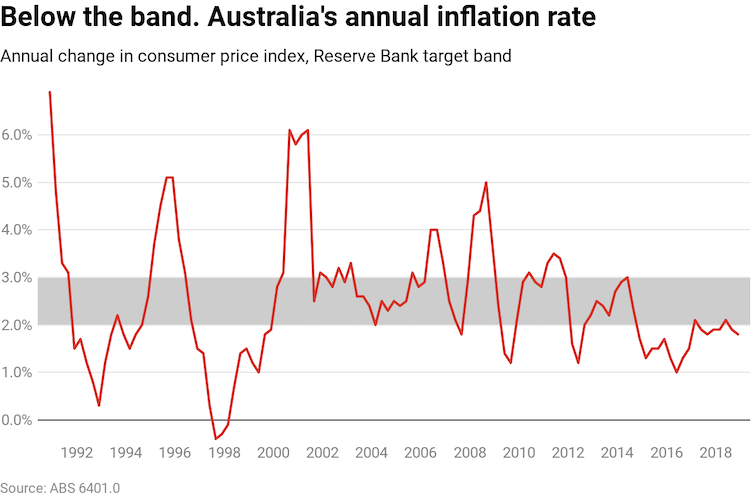 During his decade in office, the previous governor Glenn Stephens achieved an average inflation rate of 2.46% – almost bang in the centre of the target band. During his subsequent two and half years in the job, Philip Lowe has averaged just 1.87%. At no point during Lowe’s term of office has the average fallen within the target band. The rate for December, released on Wednesday[2], was 1.8%. Next Wednesday Lowe will make an unusual address to the National Press Club[3], during which he will outline his thoughts about the year ahead. It is a year which The Conversation’s forecasting panel predicted will be free of interest rate adjustments, making it a record 40 months without a rate move – Lowe’s entire term in office. 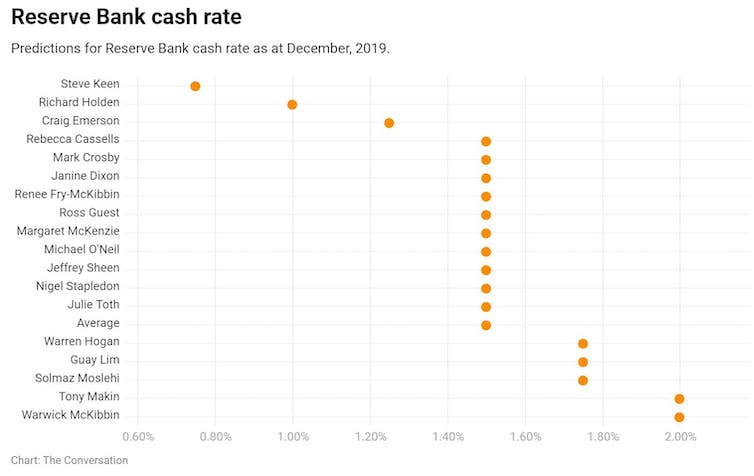 The RBA has more than one target Although the inflation target is an important part of the Reserve Bank’s mandate, it is also asked to focus on other things[4]. Among them are GDP growth, employment, and (probably less explicitly) the Australian dollar and house prices. And therein lies the problem. Unless the rate moves needed to meet all those objectives point in the same direction, the bank needs to make trade-offs, or sideline one or more of its objectives. A classic principle of economics is that a policy-maker needs one instrument (or policy tool) for each objective. It is called the Tinbergen Rule[5], after the 1969 Nobel Laureate. The bank has four or five objectives, but really only one tool – the cash rate, stuck at 1.5% since Lowe took the job. Throw in the ability to partially shape market expectations through speeches by Lowe and Deputy Governor Guy Debelle (so-called “open mouth” operations), and maybe it has two. Since Lowe took office, the casualty of this imbalance between instruments and objectives has been the inflation target. And it’s unlikely to change for some time. So why is inflation so low? Australia is not alone. Advanced economies around the world have had several years of low wages growth, low productivity growth, and low inflation. Populations are ageing, less keen on spending, and have a glut of excess savings. Add to this the fact that technology and international trade have made a whole range of goods probably permanently cheaper and it’s hard to find inflationary pressure. Read more: Vital Signs: inflation misses again, so where does the RBA go next?[6] Potentially making things worse in Australia is the decline in house prices in Sydney and Melbourne eating into consumer confidence and with it, spending. With well over half of the economy coming from private spending, already soft consumer spending could be hit further.[7] So far, RBA Governor Philip Lowe has been doing an admirable impression of Mr Micawber, in the Charles Dickens novel David Copperfield. When it comes to inflation, he is hoping “something will turn up”. But it hasn’t, even with historically low levels of unemployment. Worse still, it doesn’t even seem to really be ticking up in the United States, despite the lowest year-end unemployment rate since 1969[8]. And why does it target inflation? The bank targets inflation in order to maintain credibility. The high levels of inflation in the 1970s and ‘80s – despite quite high levels of unemployment – led to the realisation that expectations had a lot to do with it. Put simply, if people believe prices are going to rise sharply they will demand steep wage rises, which will cause prices to rise sharply. It becomes a “wage-price spiral”. Macroeconomists and central bankers realised that a credible commitment to keep inflation low would remove the need for the large wage rises, cutting off the spiral before it got going. The bank describes the rationale for its inflation target this way[9]: The Governor and the Treasurer have agreed that the appropriate target for monetary policy in Australia is to achieve an inflation rate of 2–3%, on average, over time. This is a rate of inflation sufficiently low that it does not materially distort economic decisions in the community. Seeking to achieve this rate, on average, provides discipline for monetary policy decision-making, and serves as an anchor for private-sector inflation expectations. That’s been the logic for the past 25 years. We have certainly done away with inflationary spirals. We are in the age of secular stagnation, with an excess of savings chasing too little spending. A world where, since the turn of this century, robust growth has only really been possible when accompanied with financial bubbles–first in dot-coms, then in housing. So what’s a central banker to do? There is an active debate[10] among central bankers[11] and leading macroeconomists about whether to abandon the inflation targeting framework. Luminaries like former US Treasury Secretary Larry Summers[12] argue that inflation targets are, to borrow from Hamlet[13], “more honour’d in the breach than the observance”. Right now Lowe faces a real dilemma. If he doesn’t cut rates, the inflation target will become more and more of a joke. It will add to pressure on him to articulate a new monetary policy framework for a new secular-stagnation era. If he does, he risks re-inflating the housing bubble, boosting already sky-high household debt, and giving himself even less wiggle room if a recession hits. On Tuesday he’ll leave the cash rate at 1.50%. And on the first Tuesday of the next month, and the the next, and the one after that… But I think he’ll begin serious internal discussions about a new monetary policy framework, and the mechanics of getting into (and out of) a massive bond-buying program (otherwise known as quantitative easing or printing money) if needed to ward off the next recession should the cash rate remain or get so low he can’t cut it further. He might have already started. He might drop further hints on Wednesday. Read more: No surplus, no share market growth, no lift in wage growth. Economic survey points to bleaker times post-election[14]