In its interim report[1] published four months ago, the Banking Royal Commission chalks up shocking misconduct in the finance industry to greed – “the pursuit of short-term profit at the expense of basic standards of honesty”.

“How else,” it asks, “is charging continuing advice fees to the dead to be explained?”

It is seductively easy to explain misconduct in terms of this base human motive, one of the seven deadly sins. But moral failure does not satisfactorily explain why humans misbehave in organisations. There are also organisational reasons.

The royal commission is, of course, aware this. Its interim report points to greed stimulated by incentive payments or bonuses: “From the executive suite to the front line, staff were measured and rewarded by reference to profit and sales.”

Is the solution, then, to simply get rid of incentive payments?

Read more: We'll wait an eternity for the banks to fix themselves. Here's what we can do now[2]

My view, based on many years looking at the causes of catastrophes such as the Deepwater Horizon disaster[3], is that there is no easy way to do this.

The uncomfortable reality is that incentive payments are an inherent aspect of modern capitalism.

The only effective way to detoxify the incentive individuals have to do the wrong thing in pursuit of bigger profits is to counterbalance them with equally compelling incentives to not act dishonestly.

The interim report does not explicitly say incentive payments should be done away with, but it is the implication of much of the commentary.

It states (on page 317) the premise that staff and intermediaries will not do their jobs properly without incentive payments “must be challenged”.

It suggests there is too much conflict of interest in “customer-facing staff” being paid according to what they sell or advise customers: “And if customer-facing staff should not be paid incentives, why should their managers, or those who manage the managers?”

But it also acknowledges that attempts to change the incentive culture would most certainly be resisted: “Changing culture in the Australian banks may not be easy and may take time. It cannot be assumed that entities will embrace change willingly or immediately.” 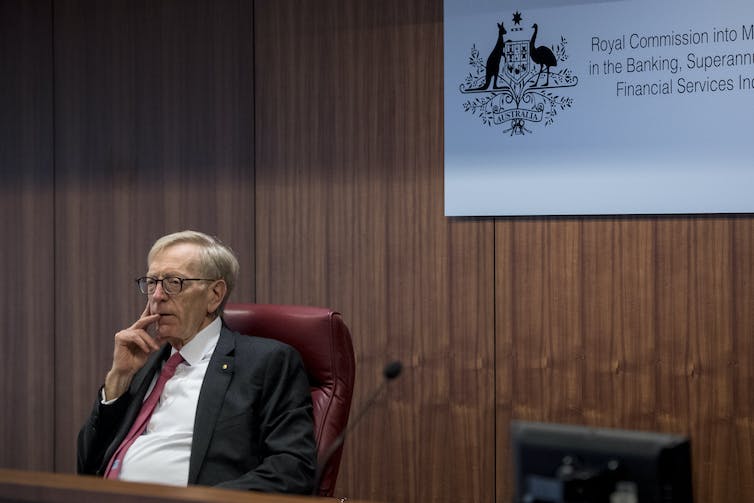 Commissioner Ken Hayne at the initial public hearing, in February 2018, of the Royal Commission into Misconduct in the Banking, Superannuation and Financial Services Industry. Eddie Jim/AAP

It’s important to understand why the banks would be so hostile to such a change.

Incentive payments are a way to address a fundamental problem in modern capitalism, particularly in large publicly listed companies with multiple layers of managers.

In business literature it is called the “principal/agent problem” – the principal being the owner (or shareholder) and the agent being the manager (or executive) hired to run the business on behalf of the owner (or, in the case of a large company, many thousands of owners).

Agents have legal duty to put shareholder interests above all others. The “problem” is that, if left to themselves, they may in act in their own interest, putting their own wealth, power and prestige before the interest of the owners.

Tying executive remuneration to company financial performance has developed as a way to mitigate this problem. Remuneration consultants have developed very finely tuned schemes with huge incentives for top executives enrich themselves only by enriching their principals, through maximising total shareholder returns.

Read more: Will Hayne blink? The problems with banks demand tough measures that neither they nor their regulators want[4]

The downside, as the royal commission has exposed, is that such incentives also encourage executives to consider customers as sheep to be fleeced.

Key to this is how long-term incentive schemes are structured.

Short-term incentives are bonuses paid to top executives annually. In addition to these, each year a large bonus equal to or greater than their base salary is provisionally awarded. The payment is deferred for a period, often three years. The executive gets this long-term incentive only if certain conditions are met.

Those conditions largely concern the company’s financial performance in the intervening years. In most schemes the company’s performance must also be better than most of its competitors. Typically this is determined by comparing it with a select group of companies. If it achieves less than the median, the executive loses all or most of the long-term bonus.

It is hard to imagine a system better designed to pressure a chief executive to put profit ahead of all else.

Long-term bonuses operate in this way in many sectors of the economy, not just banking. They lie behind many of the major accidents in the oil and gas industry that I have written about[5].

So the problem with the banking and financial services sector is a whole system designed to maximise shareholder returns. It is the greed of shareholders that drives the system.

How can we mitigate the antisocial aspects?

One way is to ensure the huge incentives to do the wrong thing in pursuit of maximum profit are counterbalanced by the penalties. Right now that’s just not the case. The penalty for corporate malfeasance is often a fine, imposed on the company, not individuals.

We should hold top executives and even directors personally and criminally liable when companies fail to take proper account of the interests of consumers, customers and employees. This will ensures it will not always be in their interests to align their morality with the interests of shareholders.

Read more: Confiscate their super. If it works for sports stars, it could work for bankers[6]

Health, safety and environment laws impose such criminal liabilities on senior office holders when they fail to protect their employees and the environment. Acute awareness of this liability has resulted in a much greater concern for the lives of workers and the environment than would be dictated by shareholder interests alone.

In my own research I have found the influence of corporate safety risk managers is enhanced when they can highlight the legal liability of their bosses. One might expect the influence of chief risk officers in financial institutions to be similarly strengthened.

It will be interesting to see how far the royal commission ventures down this path in its final report.