Financial well-being is hard to get a handle on.

That’s because it’s a mix of how people feel and how they objectively are.

And it’s multifaceted, including things such as spending, saving, investing, borrowing, and insuring, and competing goals that involve trade-offs, such as whether to spend or save.

To help, the Melbourne Institute and the Commonwealth Bank have pulled the dimensions together in a collection of measures we think are the first of their kind: the Reported and Observed Financial Well-being Scales[1].

The results released this week show most Australians are doing OK. They report no difficulty paying necessary expenses, can cover unexpected expenses, and feel on track to provide for their financial futures. However, a substantial minority struggle.

As expected, people’s income, assets, and home ownership play big roles in their financial well-being. But their attitudes, capabilities, and behaviour are probably even more important, meaning good financial well-being is possible even at modest levels of income and wealth.

Adapting definitions that have been proposed for Australia and elsewhere, we define financial well-being as the extent to which people both perceive and have

now, in the future, and under possible adverse circumstances.

To construct the scales, we sieved through 33 self-reported survey measures and 17 bank-record measures that captured different elements of our definition. Formal analyis resulted in our two distinct but related scales.

The first, which we call the CBA-MI Reported Financial Well-being Scale, uses people’s answers to 10 survey questions about how they feel; about things such as dealing with their expenses, building up savings, and control over their finances.

The second, which we call the CBA-MI Observed Financial Well-being Scale, uses data from people’s bank records about their balances, payment problems, and ability to cover unexpected expenses.

The two scales move together. People with high levels of financial well-being on one scale tend to have high levels on the other.

However, the two scales are distinct and capture different aspects of well-being, complementing each other and jointly providing a fuller picture than either could alone. 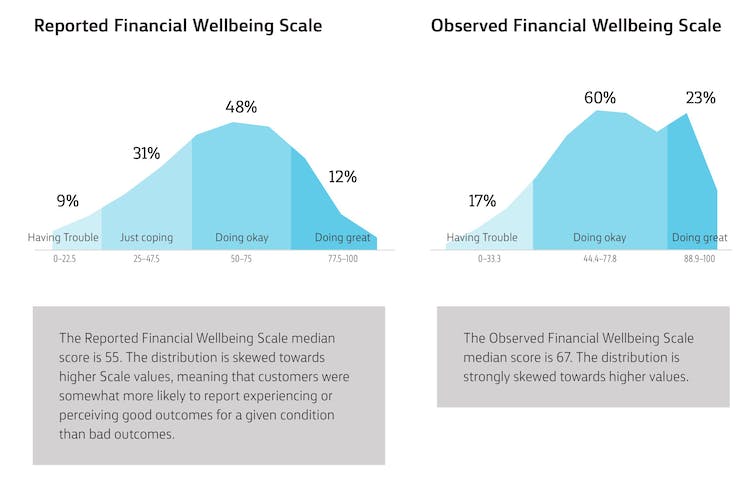