What is the chance the last tin of tuna you ate was made using slave labour? If it came from Thailand, the odds may be a lot higher than you imagine.

We have tracked the journey of tuna from the seas around Thailand to Australian supermarket shelves. This included interviewing more than 50 people, including people entrapped into forced labour. In doing so, we have been able to assess whether brands can say their supply chains are slave-free.

We believe just one brand of tinned tuna can confidently claim slavery is not involved in its supply.

Though we cannot name that brand, due to ethical guidelines to ensure our research remains independent of commercial considerations, our results further validate the need for the new Modern Slavery Act, passed by the Australian parliament late last year, to drive companies to address the problem of slavery in international supply chains.

Thailand is the world’s top exporter of tuna, and one of the biggest exporters of all fish. Its marine fishing industry is particularly prone to modern slavery due to its size, lack of regulation, extent of illegal operations, and exploitation of migrant workers.

There are more than 50,000 fishing vessels and about 500,000 workers in the industry. Investigations by groups including Greenpeace[1] and the International Labour Organisation[2] suggest the majority of those working on boats meet the definition of modern slavery – any situation where a person is forced to work under threat; is owned or controlled by their employer; dehumanised or treated as a commodity; and is not free to leave.

Read more: How to reduce slavery in seafood supply chains[3]

Any person tricked or trafficked to work in locations far from home who then has their freedom of movement denied either physically or financially is a modern slave.

Statistics collected by Thailand Department of Fisheries on 42,512 fishing vessels in 2014 showed 82% of 172,430 fishermen employed on them were migrant workers. The majority of those also working in processing plants are also migrants. Mainly from Cambodia and Myanmar, they are often enticed by traffickers with promises of well-paid jobs, but find it is a different story once they arrive. 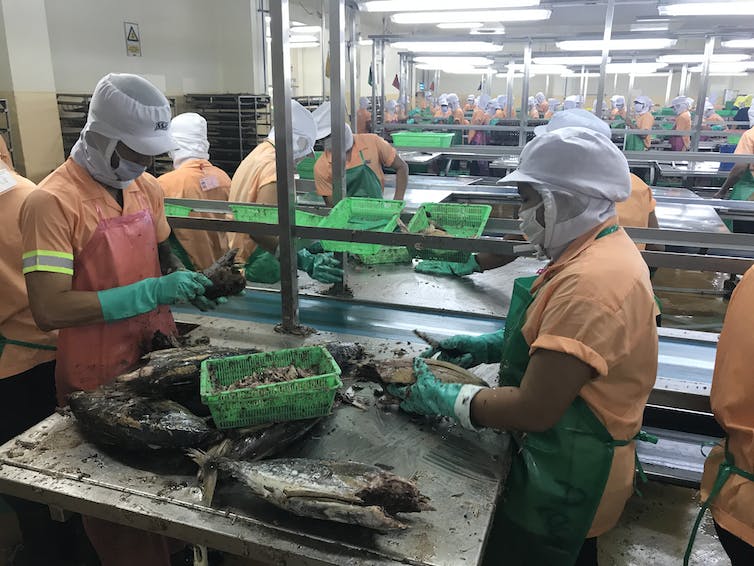 A processing plant near Bangkok visited by the authors. Almost all the workers are migrants. This factory works with local non-government organisations to ensure its workers are ethically recruited and supported. Kate Nicholls, CC BY[4]

So being foreign, usually without education and language skills, makes them particularly vulnerable to exploitation in an industry where “rogue fleets” already operate outside the law through illegal fishing operations, and where safety and labour standards are poorly enforced.

Practices in Thailand’s fishing industry (and elsewhere in Southeast Asia) were brought to the attention of the rest of the world in 2015 by the investigative work of Associated Press journalists[5] (for which they won the Pulitzer Prize for Public Service in 2016).

Responses by governments and companies since then have proved the inadequacy of existing legal and managerial frameworks to effectively tackle the problem.

Transparency is the key issue. Illegal practices are by their very nature deliberately hidden. Methods that retailers might use to manage other aspects of their supply chains – such as sending out a survey to their suppliers and suppliers’ suppliers – don’t work.

Read more: What businesses can do to stamp out slavery in their supply chains[6]

What complicates transparency in fisheries is that it is not sufficient to just know the supplier or the wholesaler or even the geographic origin of the fish. Retailers also need to know the specifics of each fishing trip and the labour involved. Even then, there could be “trans-shipment” – where fish are transferred from one vessel to another out at sea. This a problem even with sustainable fishing certification schemes like that run by the Marine Stewardship Council [7](which does not certify labour conditions anyway).

There needs to be greater coordination and better mechanisms to trace risk exposure from fishing boat to factory to supermarket.

More to be done, but it’s a start

Australia’s Modern Slavery Act will require companies with turnovers of more than A$100 million to report what they are doing to keep their products slave-free.

From 2020 they will have to produce “modern slavery statements” that detail where they source their products, and the actions they have taken to ensure slavery does not exist within their extended supply chains.

There is more to be done. The law does not include penalties for non-compliance. There is no statutory body to provide guidance and oversight, as similar British legislation enacted in 2015 provides.

Read more: At last, Australia has a Modern Slavery Act. Here's what you'll need to know[8]

But it is a start. It at least puts pressure on all brands to be more transparent about their supply chains and their efforts to ensure decent working conditions. Up to now scrutiny has been patchy, with some brands investing in cleaning up their supply chains due to being “named and shamed” while other brands have flown under the radar.

Hopefully now consumers will be more aware of the modern slavery risks, and in time be able to research the publicly shared information of their favourite brands.