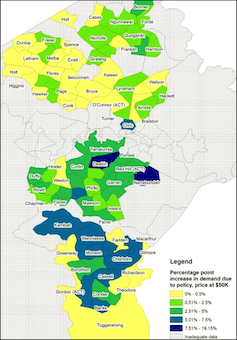 While that number is an improvement on previous months, it is tiny[2] compared to the 25% to 85% of new cars sold that are all-electric in European nations such as Germany, the Netherlands, Denmark and Norway.

A lot has been written about why that is[3], but less about what an individual state or territory can do to improve it, in the absence of help from the federal government.

Our team at the National Centre for Social and Economic Modelling, University of Canberra[4] has examined what the Australian Capital Territory[5] (ACT) is doing, and what effect this is having on electric vehicle take-up by price and type of household.

We used Australian Bureau of Statistics census and household expenditure data as well as microsimulations based on a survey of vehicle preferences to examine behaviour before and after the changes.

We simulated the decision to buy electric based on a total cost of ownership, which included the value of the vehicle as well as operational costs including petrol, service and repair.

Our modelling found that with a stamp duty exemption, at an electric vehicle price of A$50,000, around 9%[8] of new vehicles sold would be electric in five years.

The proportion climbs to 11% with zero-interest loan and free registration added.

But even after five years, the proportion of total cars on ACT roads that were electric would be small: just 1.6% with just the stamp duty exemption, and 2.0% with the other measures as well.

At a much-lower electric vehicle price of $25,000, an extraordinary 23%[10] of new vehicles sold after five years would be electric, provided they were stamp duty exempt.

As a proportion of the entire car fleet in the ACT, the figures would be 4.1%, 4.8% and 5.3% respectively, depending on those price, loan and registration factors. That would mean much larger demand than at present, but still small enough to mean the infrastructure for maintaining conventional vehicles would be needed for some time.