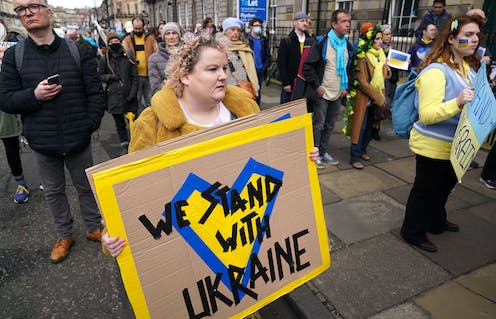 Ukrainian president Volodymyr Zelenskyy’s recent call for a boycott of Russian oil[1] and other import-export bans was aimed at global leaders, but consumers across social media are also advocating a form of personal economic sanctions.

Some New Zealand shoppers have compiled lists of alcohol brands to avoid while others have identified Ukrainian brands to support.

But alongside these boycott lists are repeated dismissals by cynics who say local boycotts will have little impact on the European conflict. So who’s right?

Boycotts spring from the need to do something

Boycotts are meant to address a power imbalance and give individuals a say through collective action.

Boycotting Russian goods gives shoppers a small sense of efficacy in relation to a wider political issue. By choosing to reject Russian products, shoppers are hoping to create enough economic pain to convince Vladimir Putin’s government to back down from its invasion of Ukraine.

Read more: How one woman pulled off the first consumer boycott – and helped inspire the British to abolish slavery[3]

This is not the first time consumers have attempted to achieve political change via shopping decisions. SodaStream was targeted for international boycott because of the company’s ties to Israel[4] and its factory in the West Bank.

Activists called on tourists to partake in “moral calculus[5]” before visiting Bali over Indonesia’s occupation of West Papua.

In the aftermath of 9/11, politicians in the United States called for a boycott of French products[6] to punish the country for its opposition to the invasion of Iraq.

The gap between intention and action

While shoppers might make the public commitment to boycott Russian products, the reality is there are competing factors that feed into shopping decisions. The gap between intention and action can become a chasm.

The high cost of living in New Zealand means shoppers are typically motivated by price and convenience. A New Zealand shopper might have the best intentions to boycott Russian flour, vodka or oil, but their commitment could be challenged if those products are the cheapest options.

In order for a boycott to be effective, consumers need to have the means to make the sacrifice, which could involve changing a habit, buying something that is more expensive or something that is a little less convenient.

Palestinians called for a boycott of Israeli products over attacks on Gaza and the West Bank in 2021. Nedal Eshtayah/Anadolu Agency via Getty Images[8]

The second hurdle to an effective boycott is scepticism: shoppers might have the means to boycott Russia but do they believe it will have any effect? Will Russia still steamroll its way into Ukraine regardless of the shopping decisions of a group of New Zealand consumers?

Boycotts are more effective when shoppers believe their sacrifice will make a difference.

Finally, consumers need to also be able to identify what products come from Russia. While the social media lists are useful, products that seem Russian but aren’t, like Swedish brand Absolut Vodka, have the potential to be caught up in the boycott of Russian goods.

The rise of buycotts

Consumers often find “buycotts[9]” easier to commit to than the traditional boycott. A buycott is when a shopper deliberately buys a company’s or a country’s products in support of their policies.

Buycotts are less of a sacrifice and allow consumers to see immediate results.

Buying products that put money back into the Ukrainian economy or go towards charities supporting Ukrainian refugees can create a sense of doing something positive, with less sacrifice than a boycott.

Ultimately, the most effective boycotts are those targeted at specific companies and which can create change in response to consumer demand. Nike learned this lesson in the 1990s when it was boycotted for its labour practices[11] in developing countries.

Consumers had options and Nike lost market share to its competitors, forcing the company to change the way it made its products. Closer to home, chocolate giant Cadbury was forced to reverse course[12] after using palm oil in its dairy milk chocolate.

When it’s a country-level boycott, however, government sanctions need to be part of the equation. Consumers can apply pressure to the government to apply sanctions so that products from the offending country don’t make it along the supply chain. In that case, the consumer is more valuable as a voter than a boycotting shopper.