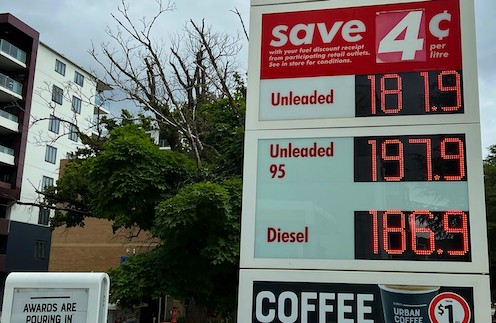 Global crude oil prices have already reached their highest levels since 2014 in response to Russia’s military incursion into Ukraine.

Read more: How Russia’s recognition of breakaway parts of Ukraine breached international law – and set the stage for invasion[1]

Skittish global energy markets are now factoring in disruptions to Russia’s supply through Western sanctions as well as Russia cutting off to supplies to Europe, its main market[2] for both oil and gas.

Australians will feel these market anxieties too, with changes in retail prices largely determined by international price benchmarks for refined petrol.

It typically takes more than a week[3] for changes in international prices to flow through to retail prices in Australian cities, and longer in regional areas.

But based on what is happening internationally we can expect petrol prices in Australia to soon reach an average of $2.10 a litre.

How are petrol prices set?

As in other importing countries, the price Australians pay at the petrol pump therefore has three main components:

The following chart shows the relationship between average retail prices in Australian cities and the benchmark price for 95-octane unleaded petroleum in Singapore, the largest oil trading exchange in our region. (The fuel is called Singapore Mogas 95 – “mogas” meaning motor gasoline.)

ACCC[7] Taxes are the second-biggest component. These consist of an excise and the goods and services tax. GST is 10% of the retail price (or 1/11 of the total price paid). As of February 2022[8], the excise was fixed at 44.2 cents a litre, so it doesn’t change with the retail price. Assuming a petrol price of $1.90/litre, taxes would comprise about a third of the cost. The tax Australians pay on petrol is among the lowest[9] in the OECD group of advanced economies. The remainder of the retail price includes supply chain costs and profit margins for refiners, wholesalers, distributors and retailers. The amount motorists pay as profit is less than 10 cents a litre. Global ripples Australia may not import crude oil or petrol from Russia. But the world oil market behaves as one great pool, where changes in market conditions in one area quickly affect other geographic areas. More than half of Russia’s oil exports and most of its natural gas exports go to Europe. Russia provides about 30% of Europe’s crude oil and refined petrol imports and 40% of it natural gas imports. In response to Russia’s actions against Ukraine, Germany has already moved to halt[10] a new gas pipeline being laid in the Baltic Sea between Russia and Germany. Market watchers worry the Russian gas that flows across Ukraine to Europe could also be shut off. This would lead to severe shortages in some countries and drive up the price of gas as well as other fuels, such as oil. There is also considerable pressure to ensure economic sanctions imposed on Russia are not undermined by Moscow continuing to profit from its oil and gas trade. Analysts from the Brookings Institution[11], for example, have argued for sanctions on Russian energy exports. Read more: Why Vladimir Putin is so confident in his Ukraine strategy – he has a trump card in China[12] What we can expect Two weeks ago, when the global benchmark oil price was just above US$90 a barrel, JP Morgan predicted the price would reach US$125 a barrel[13]. This week Goldman Sachs analysts tipped that “outright conflict” coupled with “punitive sanctions” will increase oil prices by 13%[14]. The five-city average Australian petrol price was near A$1.70[15] per litre when the benchhmark oil price was US$90 per barrel. This suggests an increase to US$125 a barrel would lift average Australian city prices to as much as $2.10 per litre. References^ How Russia’s recognition of breakaway parts of Ukraine breached international law – and set the stage for invasion (theconversation.com)^ main market (www.eia.gov)^ more than a week (www.accc.gov.au)^ crude oil (theconversation.com)^ are just two (www.abc.net.au)^ closely scrutinises (www.accc.gov.au)^ ACCC (www.accc.gov.au)^ As of February 2022 (www.accc.gov.au)^ the lowest (www.aip.com.au)^ halt (www.latimes.com)^ Brookings Institution (www.brookings.edu)^ Why Vladimir Putin is so confident in his Ukraine strategy – he has a trump card in China (theconversation.com)^ US$125 a barrel (www.cnbc.com)^ 13% (fortune.com)^ A$1.70 (www.aip.com.au)Authors: Vlado Vivoda, Senior Lecturer in Strategic Studies (Australian War College), Deakin University