This week we’re exploring the state of nine different policy areas across Australia’s states, as detailed in Grattan Institute’s State Orange Book 2018. Read the other articles in the series here[1].

Voters in Victoria go to the polls within weeks; in New South Wales within months.

State policy has rarely been more important. But what should the priorities be, not only for the governments in Australia’s two biggest states, but also for the other states whose elections are further away?

In this series for The Conversation, based on our State Orange Book 2018[2], the Grattan Institute outlines where state and territory governments should focus to improve Australia.

There are problems a plenty

The problems aren’t hard to find. Per capita income has been flat for five years as the mining boom subsided. Home ownership is falling fast among the young and the poor. Those on low incomes are spending more on housing, and homelessness is rising, particularly in NSW.

Our schools are not keeping up with the best in the world. In most states, people are waiting longer for medical treatments. Electricity prices have increased significantly over the past few years while the climate policy wars rage on.

A new State Scorecard[3] compiled by Grattan Institute compares states and territories on the most important outcomes for each policy area. In many cases, some states are much better than others because their governments have implemented important reforms – often without much fanfare. 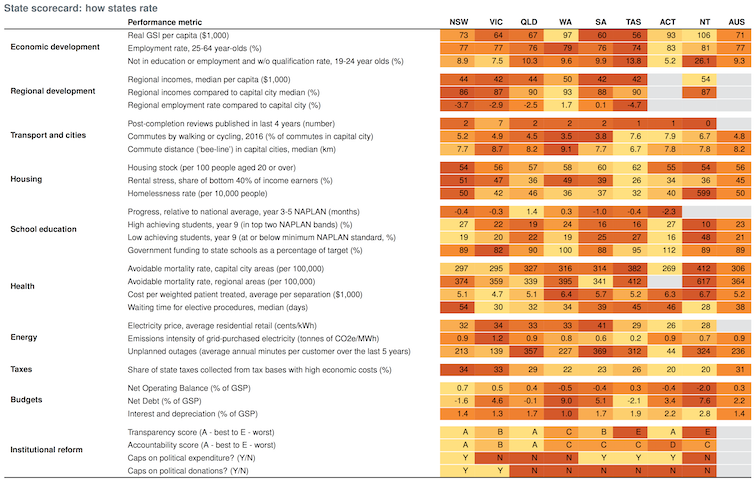 Victoria’s hospitals cost less per patient and contribute more to better health than elsewhere. Queensland’s school students learn more in Years 3 to 5, and they are performing much better than they used to. Many Western Australian school outcomes are also much better. The Australian Capital Territory has started to replace inefficient stamp duties with a much more efficient broad-based property tax. NSW has used the good times to improve its budget position. NSW, Victoria, South Australia and the ACT have all increased the transparency of political decision-making and tightened controls over money in politics. But each state can learn from the others Every state and territory can learn from others and do better. State governments – particularly NSW and Victoria – face population pressures. They need to resist political pressure to wind back planning reforms that have helped to increase housing supply, and instead go further to ensure enough housing is built, particularly in established suburbs, to accommodate rapidly growing populations. NSW and Victoria should commission work to enable the introduction of time-of-day road and public transport pricing to manage congestion in Sydney and Melbourne. All states should stop announcing transport projects before they have been analysed rigorously. They should also evaluate completed projects properly. 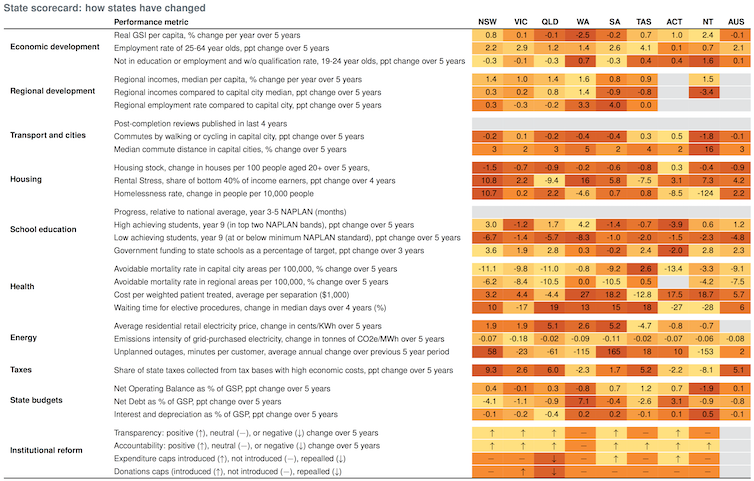 There’s much states can do Although the Commonwealth controls many economic levers, there are many others that are primarily state government responsibilities. Land-use planning policies don’t only affect housing affordability. They are also amongst the biggest policy levers for state governments to boost economic growth. Geography matters a lot to economic growth. An advanced economy like Australia is dominated by services industries, which often benefit from co-location and tend to concentrate in major cities. How much businesses can co-locate is affected by planning rules that guide the availability of land both for businesses and the homes of the people who work in them. Read more: RBA research shows that zoning restrictions are driving up housing prices[4] Fewer restrictions on land use and subdivision will increase economic growth by enabling more people to access more jobs, while allowing firms to optimise their location. There are other economic levers. All states should follow the lead of the ACT and replace stamp duties with broad-based property taxes. States should reform electricity markets to encourage reliability and reduce emissions – whether or not the Commonwealth cooperates. And much states should not do States should stop promising to restrict competition in order to increase the sale price of assets like ports. And they should accept that no amount of regional spending is likely to do much to accelerate regional growth beyond what is going to happen anyway. The State Orange Book 2018 shows that the states and territories could deliver services better. Each can be guided by the best Other states should follow Victoria’s lead and reduce the cost of each procedure in public hospitals, and the variations between them. And they should develop more community-based prevention programs to reduce the disparity between regional and urban health outcomes. States should lift progress for all school students by identifying and spreading good teaching practices at the same time as strengthening the evidence base on what works best in the classroom. They should also invest more in early learning for the most disadvantaged students. And make their decisions more open Institutional reforms are needed. States need more visibility of their long-term budget positions. While institutional accountability is improving in many states, Western Australia, Tasmania and the Northern Territory need to limit election spending and make political donations and lobbying more transparent. Because they matter State government doesn’t always get as much attention as our federal politics. Often the important things sound a bit boring: the management of hospitals and schools; the rigorous assessment of proposed transport projects; and the minutiae of planning schemes. But when these things are done well, they make a big difference to people’s lives. So when people cast their votes in the Victorian and NSW elections, there is a lot at stake. We hope this series will help voters to understand the key issues, and perhaps help leaders in every state understand the difference they can make.