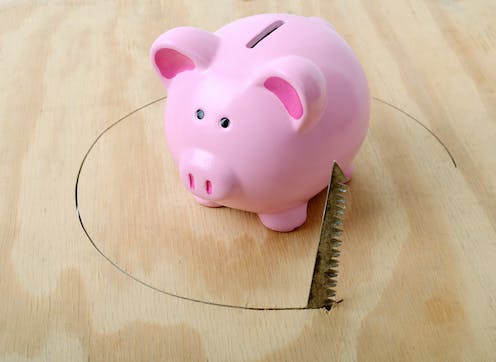 “Did you think to yourself that taking money to which there was no entitlement raised a question of the criminal law?” Commissioner Kenneth Hayne asked Nicole Smith, who resigned as chair of NAB’s superannuation trustee, NULIS, a little more than a month before she fronted the banking royal commission.

Her admissions and the evidence from the royal commission that more than $A1 billion[2] has been taken from superannuation accounts for no service show we need better supervision of the trustees who oversee more than A$2.7 trillion[3] in superannuation assets.

As senior counsel assisting the commission Michael Hodge put it[4]:

Trustees are surrounded by temptation, to preference the interests of their sponsoring organisations, to act in the interests of other parts of their corporate group, to choose profit over the interests of members, and to establish structures that consign to others the responsibility for the fund and thereby relieve the trustee of visibility of anything that might be troubling.

The entrenched practice of retail super funds using superannuation trust funds as profit-making enterprises undermines the integrity of the whole superannuation sector. Focused regulatory action and oversight are imperative to protect it.

Super trustees are subject to a range of stringent duties.

There are “equitable” duties, which arise from trustees being fiduciaries – responsible for acting in the best interests of the owners of the assets they manage. As fiduciaries, super trustees must avoid conflicts of interest and account for any profit they make.

As trustees specifically, they must act in the best interests of the beneficiaries and exercise powers conferred to them as trustees (trust powers) with real and genuine consideration.

This is underlined by the “statutory” duties of the Superannuation Industry (Supervision) Act 1993[6]. It states directors of corporate superannuation trusts must perform their duties in the best interests of their beneficiaries, superannuation fund members.

The act also establishes supervision and oversight of super trustees by the Australian Prudential Regulation Authority (APRA), the Australian Securities and Investments Commission (ASIC) and the Commissioner of Taxation.

Yet clearly this oversight has been failing. The evidence from the royal commission is that many super trustees having been ignoring their duties. They have gone along with rubber-stamping unjustifiable fees purely because their parent institutions wanted the money.

In 2017 the prudential regulator was given the power to directly disqualify directors[7] of superannuation trustee corporations. It already had the power to do so by applying to the Federal Court. Over the past decade, however, it has sought just one disqualification[8].

The regulator’s deputy chair, Helen Rowell, has argued[9] this is due to APRA trying to protect the public interest, avoiding the risk of a run on a fund. But its inaction has arguably emboldened super trustees to ignore their duties because of the low risk of being penalised.

The royal commission may result in criminal charges against banks and financial institutions. One outcome that must come is stronger oversight of super trustees.

Federal parliament already has before it amendments to the Superannuation Industry (Supervision) Act[11] that include requiring individual super trustees to make annual written assessments about whether fees serve the interests of members. However, the bill has reportedly been shelved[12].

It is therefore critical the royal commission recommend strong action, including reforms proposed by previous inquiries into the financial services sector.

Read more: The problem with Australia's banks is one of too much law and too little enforcement[13]

These include the Financial System Inquiry[14], which recommended in 2015 that super funds must have a majority of independent directors on their trustee boards. It also proposed new civil and criminal penalties for directors failing to act in the best interests of fund members.

The trust remains the most appropriate legal mechanism to manage savings accumulated over a long time. Much stronger behavioural controls and civil penalties are necessary to ensure super trustees act honestly and in good faith for the benefit of the beneficiaries. That they are, in short, trustworthy.