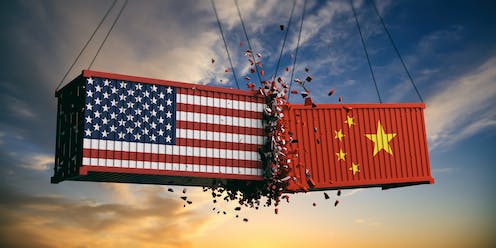 As Donald Trump escalates his trade war with China, slapping a 10% tariff on roughly $US200 billion of imports that will climb to 25% if China retaliates[1], he appears to found something of a soul mate in Scott Morrison.

“We both get it,” Australia’s new prime minister said this week. What they get, he told the New York Times’ Maureen Dowd[2], is that some people feel left off the globalism gravy train: “The president gets that. I get it.”

His words signal a profound change of tack in Australian economic diplomacy as the new US approach[3] threatens to break down the World Trade Organisation[4] and universal trade agreements in general.

Under Trump, trade will depend on stronger bilateral (one on one) agreements that support US geopolitics.

Double dangers in middle of the road

The status quo of relying on China for trade surpluses and on the US for security patronage might not be sustainable in the long run.

Siding with neither China or the US, attempting a “third way” of non-alignment, runs the risks losing out on both trade and security.

Broadly speaking, we can summarise the trade war between the US and China as a contest between sea and land[6].

The US aims to secure trade routes through the Indian and Pacific oceans. China wants to shift the bedrock of international trade to Central Asia.

Its Belt and Road Initiative[7] is a grand strategic plan to join Eurasian economies from Lisbon to Vladivostok. The plan would end the historic era of Anglo-American hegemony founded on controlling trade routes across the Atlantic, Indian and Pacific oceans.

Read more: Is the Trump administration getting East Asia right, or just confusing it?[8]

Leaving political ideologies aside, its economic prosperity depends on trade by sea. The return of Marco Polo’s world[9] would eventually make Australia little more than a price-taking commodity supplier to trade and investment hubs from Beijing to Venice.

This means our national interests lie with the US defence of its seaborne trading routes.

Picking a side will be costly

In the short term, especially if the trade war escalates, siding with the US will be costly. We could lose a good deal of China-related export and business opportunities. Over the longer run we could offset the losses by diversifying to trade and invest in countries with shared strategic interests, such as Indonesia and India.

We would be well advised to reconsider the diplomatic benefit of RCEP, the China-led Regional Comprehensive Economic Partnership[10]. This mega regional trade deal between the 10 members of the Association of Southeast Asian Nations and their bilateral trade partners has been dubbed the Chinese Trans Pacific Partnership. It can be seen as an extension of Xi Jinping’s major-power agenda[11].

After a promising start, RCEP negotiations now appear to be stuck. The main obstacle is India’s fear[12] of worsening its already significant trade deficit with China.

Our interests lie with the US, and India

Another sticking point[13] is that India, the Philippines and other potential members want countries like Australia, New Zealand and Japan to open up their markets for information technology and professional services.

In pure trade terms we would lose little if the RCEP did not proceed. We already have strong bilateral ties with all the negotiating countries apart from India, with whom we are presently negotiating a free trade agreement[14].

We would be well advised to use our limited diplomatic resources for that and supporting the US when it comes time to pick sides.