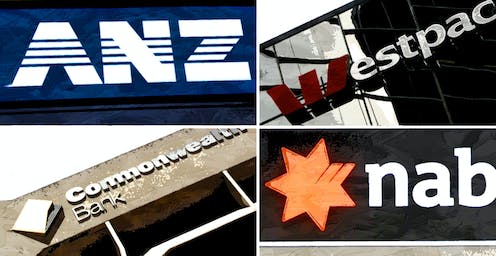 Much has been written about the taxpayer-funded windfalls to some companies[1] provided by the A$90 billion JobKeeper scheme. Their gains have come from grants given to them to offset projected COVID-19 losses — with no obligation to pay that money back when the losses didn’t eventuate.

Australia banks may have reaped a similar (albeit much smaller) windfall via the Reserve Bank’s Term Funding Facility[2] (TFF).

This loan scheme handed banks A$188 billion at extraordinarily cheap interest rates to help them “support their customers and help the economy through a difficult period”.

But it appears this cheap money may have given the three biggest banks — Commonwealth Bank, National Australia Bank and ANZ Bank — the opportunity to enrich their shareholders through funding share buybacks[3] rather than repaying the cheap loans.

There would be nothing wrong with the share buybacks if the effective subsidy built into Reserve Bank’s cheap loans, worth hundreds of millions of dollars a year, has been passed through to the intended recipients — borrowers, particularly business borrowers. But this is far from clear.

How the Term Funding Facility worked

The Reserve Bank of Australia (RBA[4]) introduced the Term Funding Facility in March 2020[5]. It offered to lend each bank, at a cheap interest rate, an initial amount (a “general allowance”) equal to 3% of the bank’s loans outstanding at that date.

An “additional allowance” was available if a bank grew its lending to businesses, particularly small businesses (where an extra A$5 was available for each A$1 loan growth).

The banks borrowed A$84 billion by September 2020. The RBA then put another A$57 billion of general allowances on the table. By the time it wound up the scheme in June 2021, the RBA had lent the banks A$188 billion. Of this, A$40-50 billion were “additional allowances” for expanded business lending.

The RBA initially offered these loans at a fixed three-year rate of 0.25%, equal to its overnight cash rate target. In November 2020 it cut the interest rate on new advances to 0.1%, in line with the cut in its cash and three-year-bond rate target.

This was well below the banks’ cost of funds from other sources, so it amounted to subsidised funding from the RBA — and ultimately the taxpayer. For example, had the RBA instead bought bonds issued by the banks in the capital market, it would have earned a higher rate of return, increasing its profits. This in turn would have helped reduce the government budget deficit and the need for tax dollars to fund that deficit.

My ballpark estimate of the value of the interest rate subsidy, meant to flow through the banks to business borrowers via lower cost lending, amounts to A$500-A$600 million a year for three years. This estimate is based on comparing the cost of three-year debt financing by the banks from the capital market with the TFF rate.

The four big banks — ANZ, Commonwealth, NAB and Westpac — got about 70% of this.

If the banks fully passed this subsidy on to who it was intended to help — businesses needing cash to stay afloat or expand — there wouldn’t be anything to consider here. But the meagre publicly available evidence provides no confidence they did.

Interest rates charged to business borrowers have fallen since February 2020, but not by significantly more than would have been expected given the general fall in interest rates. With the introduction of the federal government’s loan guarantee scheme[7] for small and medium-sized enterprises, a much greater fall in rates for those borrowers could have been expected.

Whether the cheap RBA funding has prompted more lending is also questionable. In aggregate, the statistics show business lending has been stagnant since early 2020, with virtually no growth in outstanding loans for either small, medium or large businesses.

But that doesn’t mean the TFF hasn’t had an effect. What sort of decline might have happened in the absence of support measures is anyone’s guess.

Read more: Vital Signs: the RBA is not a law unto itself — an external review would be good for it[8]

That said, it’s a fact the banks have taken the opportunity to grow their most profitable line of activity, lending for housing. The cheap TFF money wasn’t necessary for this to occur, as evidenced by the huge liquid asset holdings of the banks, but it could have helped.

In the meantime, bank profitability has bounced back from early 2020, when the banks had to make provisions for possible bad debts, which are now being reversed.

All this means the banks have ended with surplus cash. What to do: use that money reduce borrowings (including TFF loans) or return funds to shareholders by buying shares back from them?

The major banks appear to opting for the latter, spending up to A$15 billion[9] on share buybacks over the next year.

Share buybacks can be done in several ways, but all essentially involve repurchasing shares on issue, held by investors, in exchange for cash. They are the profit-maximising way to dispose of surplus funds, increasing the value of shares by reducing their number.

But if banks have the cash to do this, and retained some of the subsidy from cheap TFF funding, the more socially accountable thing to do would be to first repay the cheap money the RBA lent them to “help the economy”.

Read more: Small businesses are fund-starved: here's how to make their loans cheaper[10]

There should be enough transparency about the effects of the TFF for the public to be confident the RBA has not effectively subsidised profits for shareholders. With no clear evidence, the big banks’ share buybacks are not a good look, and raise similar questions to those about JobKeeper “rorts”.