Small changes in how choices are presented or designed can have a big impact on our behaviour. Governments are taking advantage[1] of this to “nudge[2]” us into making better choices without removing our right to choose.

Instead of taxing sugar in drinks, for instance, simply changing how food is arranged in shops[3] can make people eat healthier.

Read more: 'Nudging' people towards changing behaviour: what works and why (not)?[4]

But corporations now use the very same techniques. The goal here is different - instead of helping us make better choices, the aim is to unnecessarily increase consumer spending.

Two Sides of the Same Nudge

The “default effect[6]” is widely used in nudges and sludges. If we want someone to pick a particular option, we can nudge them by making it the default.

People often stick to the default option because it takes time and effort to change or explore other options. They tend to put off opting out of defaults or considering other options as they prioritise other activities that have more immediate rewards.

Default as a Nudge

Some countries make their citizens organ donors by default, albeit with the ability to “opt out”. These countries tend to have much higher donation rates[7] than those where you must explicitly “opt in” to become a donor.

Changing the default from being a non-donor to being a donor works because interested donors who put off registering no longer need to register, and unwilling donors put off opting out.

While this nudge may not cater for every individual’s interest, it arguably creates greater social benefits, with many lives saved as a result[8].

Read more: Nudged towards homebrand by our supermarkets; but is it really a choice?[9]

Default as a Sludge

However, the very same default effect used to increase organ donations can be used against consumers, which is neither for individual interest or greater social benefits.

For example, we now live in a world where goods and services are increasingly paid for through subscriptions[10] – from software and media streaming to groceries[11].

Many subscription businesses default their customers into automatic renewal unless they choose to cancel. Setting automatic renewal as the default - instead of renew-as-needed - means people who don’t really need or want the service put off cancelling it and end up forgetting about it.

In fact, according to a survey in the United States, 70% of consumers continued to pay for unwanted subscriptions[12] simply because they forgot to cancel the services before the renewal dates. Some 29% of the respondents did not even know their subscriptions would be automatically renewed.

In the past, we often only bought goods or services when we intend to use them. In the world of subscriptions, even if we don’t use them we can still end up paying.

Many companies also make subscription cancellation difficult, which can further deter people from cancelling an unwanted service, or at least put off doing so.

The default nudge is prevalent beyond the subscription economy. For instance, many of us surrender our privacy and data to companies when we sign up to services[13]. 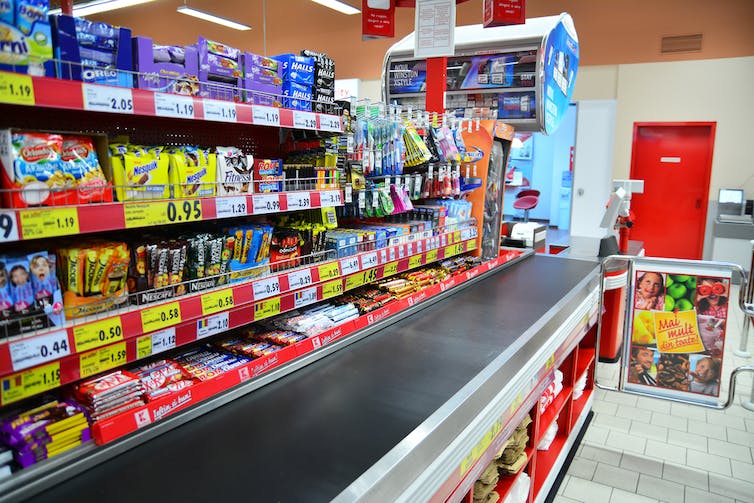 Putting candy next to checkouts is also a sludge. Shutterstock

Other sludges include supermarkets placing junk food near checkouts to drive impulse buys[14], and companies having limited time offers to create urgency, inducing people’s fear of missing out.

What can we do about it?

In the world of nudges, if we do not decide, the decision will be made for us.

We do not have the capacity to make a conscious and smart decision for every single choice we face each day, especially in the age of information and choice overload.

So, some rules must be established on how corporations can use nudges.

This year, we’ve finally seen some actions being taken, with the European Union’s new General Data Protection Regulation[17] addressing the issue of people surrendering their privacy and personal data by default. A new Californian law also requires that subscription cancellations be made easier[18].

However, we still have a long way to go.

With the systematic use of nudges becoming increasingly popular in corporations, it’s important we start drawing lines on what is acceptable and what isn’t.

As Richard Thaler, the Nobel-winning pioneer of nudges, lays out[19]:

1) nudges should be transparent and not misleading

2) it should be easy to opt out of nudges

3) nudges should improve the welfare of those being nudged.

Using nudges was meant to be a good alternative to regulations for governments, but maybe it’s time the use of nudges itself needs to be regulated.