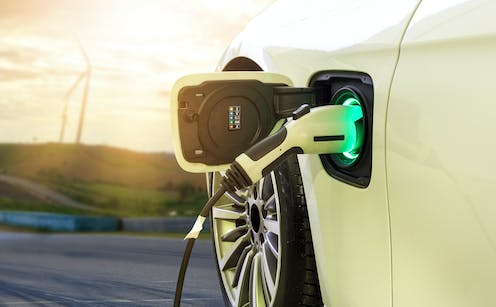 New Zealand faces two enormous challenges if it is to meet its international climate change commitments under the Paris Agreement[1]: biogenic methane emissions from agriculture, and carbon emissions from industry and transport.

For now, there seems little prospect of significantly reducing agricultural emissions, short of reducing actual livestock numbers, because the technology is currently not available. The same can’t be said for decarbonising industry and transport.

The question is, how best to do that. Carbon emissions are currently priced by the emissions trading scheme (ETS[2]), but in its present form this can’t provide the financial incentives to decarbonise within the timeframe recommended[3] by the Climate Change Commission.

To meet the government’s target of reducing greenhouse gas emissions to 30% below 2005 levels by 2030, other market mechanisms will be required. Hence the recently announced “feebate[4]” scheme to encourage a transition to electric and cleaner hybrid or conventional vehicles.

There’s no doubt the technology exists to transition industry and transport to a low-carbon future. For industry, electricity and possibly hydrogen are the obvious substitutes for coal and gas.

Decarbonising transport is also technically feasible, but creating the right incentives remains a challenge. While taxes on petrol and diesel already include a price on carbon, demand is relatively insensitive to price, regardless of global costs and local taxes.

Ironically, this reverses what happened when hybrid electric vehicles were first produced[6] in the late 19th century. Mass production of cars and cheap oil put an end to that early form of EV. Back to the future!

How will consumers respond?

Reducing the price of EVs by lowering the government’s tax take and increasing the levy on certain classes of fossil-fuelled vehicles is a bold initiative — but also something of an experiment. The outcome will depend on the extent to which the rebate increases consumer demand.

New Zealand has one of the highest rates of car ownerships in the world — close to 0.8 vehicles per person[7]. EVs are becoming more popular but still account for less than 1% of the market. Higher uptake depends on a range of variables.

Most car manufacturers are moving into the production of EVs. Although this will occur at scale, we can’t be sure the vehicles will become cheaper, particularly if recent price spikes in raw material markets continue.

New Zealand is also at the end of the supply chain, making us price takers in the global market for new EVs. The supply of second-hand EVs from Japan will depend on how often owners replace their vehicles.

On the demand side, the feebate initiative will change the relative price of cars and should increase sales. By how much and over what period is harder to predict.

New Zealanders’ ability to pay for EVs is perhaps more significant. New Zealand is not a high-income economy, and this will probably have a greater bearing on uptake. Even a second-hand vehicle at NZ$25,000 is beyond the reach of many households.

If demand turns out to be relatively insensitive to a change in price, further policy adjustments will be needed. This, of course, opens up the possibility of future governments altering the entire course of transport decarbonisation policy.

Read more: As NZ gets serious about climate change, can electricity replace fossil fuels in time?[9]

A nudge in the right direction

Economies are complex interdependent systems. The rebate scheme is a policy “nudge”, but clearly public transport, cycling and walking should be part of a broader set of policies aimed at getting people out of private motor vehicles.

Furthermore, the impact on electricity prices remains unclear. About 80-85% of New Zealand’s electricity comes from renewable sources. Timely investment in wind, geothermal and stored hydro can add to supply in the future, and the current government wants to see 100% renewable electricity[10] generation by 2030.

Paradoxically, however, transitioning to a low-carbon economy will most likely result in higher electricity bills. Bringing additional generation capacity on line, increased demand from transitioning industry and transport to electric, and the prospect of producing green hydrogen from renewable sources, will all drive up prices.

Nevertheless, New Zealand’s endowment of renewable resources positions it well to meet its obligations under the Paris Agreement. But achieving the 2030 target remains a huge challenge. The rebate scheme is but a step in that direction.