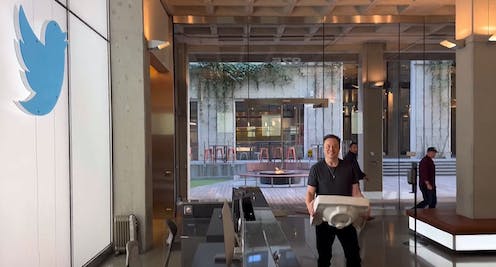 About a week after Elon Musk assumed control of Twitter on Oct. 28, 2022, the social media platform stirred up a storm of controversy by abruptly firing about half of its 7,500 employees[1].

Within a few days, according to media reports, the company had asked some of those recently departed staffers to resume working[2] – reinforcing a general impression of sloppy management. Musk’s brash approach as an employer also raises an important question about U.S. labor rights: Is it legal to terminate thousands of workers with little or no warning?

The courts may have a chance to weigh in, since several of those mass-fired workers have already filed a class-action lawsuit. They allege that Twitter broke federal and state laws for failing to give them the advance notice[3] required.

But as a scholar of employment law and policy[4], I believe that Twitter’s new management team is probably not going to face much legal fallout for dismissing half its workforce. That’s because “at-will employment[5]” – in which employers may fire an employee at any time for any legal reason, and their workers are also free to quit without facing legal consequences – is the foundation of U.S. labor laws.

The birth of at-will employment

Courts began to enshrine the at-will doctrine in the 19th century, making exceptions only for employees with fixed-term contracts. In Payne v. Western & Atlantic Railroad Co.[6], the Tennessee Supreme Court ruled that a railway foreman in Chattanooga had the right to forbid his workers from buying whiskey from a merchant named L. Payne.

Payne sued the railroad, claiming it couldn’t threaten to fire employees to discourage them from buying goods from a third party. The court disagreed, arguing that the railroad had a right to terminate employees for a good reason, a bad reason or any reason – even one that involved dealing with an independent merchant.

The notion of at-will employment and its associated lack of job protections soon rose to the level of constitutional mandate. The 1894 Pullman strike[7], which disrupted national rail traffic, prompted Congress to pass the Erdman Act[8] four years later. That law guaranteed the right of rail workers to join and form unions and to engage in collective bargaining.

The Supreme Court struck down that law in 1908. Writing for the majority in Adair v. United States[9], Justice John Marshall Harlan explained that because employers were free to use their property as they wished, they could impose and enforce their own employment rules. Employees, in turn, were free to quit the relationship. He summarized the law with the following statement:

“The right of a person to sell his labor upon such terms as he deems proper is, in its essence, the same as the right of the purchaser of labor to prescribe the conditions upon which he will accept such labor from the person offering to sell it.”

That might sound reasonable, but the Adair ruling led to the proliferation of “yellow dog” contracts[10] threatening workers with firing if they joined or organized unions. The term “yellow dog” disparaged people who were willing to accept such conditions, but the principle had widespread legal approval[11].

For three decades, the at-will doctrine stymied legislation that would have protected labor rights. Even when a supervisor unsuccessfully attempted to seduce a longtime employee’s wife and fired the employee in revenge[12], courts refused to protect the man from losing his job.

Labor rights and US law

With the passage of the National Labor Relations Act[13] in 1935, all private sector workers and their unions gained the power to collectively bargain with employers. Subsequent labor agreements, such as the one negotiated by the Steel Workers Organizing Committee[14] with Carnegie-Illinois Steel in 1937, made employers prove “just cause” before firing any person covered by the contract.

The Civil Rights Acts of 1964 and 1991[15] added employment protections prohibiting discrimination based on race, gender, religion and national origin. And the Americans with Disabilities Act[16], which Congress passed in 1990, banned employment discrimination against “qualified people[17]” with disabilities.

The federal government, and some states, has enacted additional laws since then that can protect workers against mass layoffs.

The Worker Adjustment and Retraining Act[18], enacted in 1989, is an important one. Known widely as the WARN Act, it requires employers of 500 or more people[19] to provide employees with written notification within 60 days of mass layoffs. When an employer violates this law, workers who don’t get the mandatory advance notice can sue for up to 60 days of back pay and benefits. Employers may also have to pay fines[20].

Some states have similar laws on their books – including California, where Twitter is headquartered.

The former Twitter employees who have sued[21] the company, seeking damages, allege that Twitter failed to give the required legal notice before their layoffs as required by the federal and California WARN acts.

But Musk has tweeted[22] that the fired employees will receive severance packages that amount to three months’ pay.

Contractual agreements between employers and their employees, such as negotiated union agreements, may provide protection in the form of seniority preferences[23]. Absent such contracts, workers must rely on legislative safeguards.

Under Musk’s leadership, Twitter has reportedly been inconsistent with the severance packages[24] it has offered fired employees.

It’s not clear that all of its U.S.-based workers were offered the legally required 60 days of compensation. Widespread reports also indicate that Twitter has demanded that fired workers sign documents[25] that would release Twitter from any claims made against the company.

Given the circumstances, I believe it is unlikely that former employees who are suing Twitter will prevail. The U.S. Department of Labor offers advice and services[26] for workers who believe their employers failed to abide by the WARN Act’s requirements. But those measures provide only limited relief, such as recommendations about unemployment insurance.

Unfortunately for fired Twitter employees, there are few legal options available for those who refuse whatever Musk offers them when he scraps their jobs.

Portions of this article appeared in a previous article published on July 13, 2021[27]