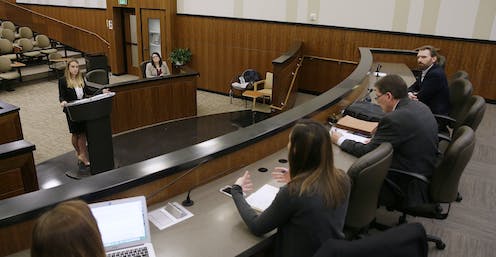 Six descendants of Serranus Clinton Hastings, California’s first chief justice, and a group that says it represents alumni are suing the state of California[1] over its decision to rename a nearly 150-year-old law school. The University of California, Hastings College of the Law, will become UC College of the Law, San Francisco[2], in 2023, in accordance with a law[3] state legislators passed and Gov. Gavin Newsom signed on Sept. 23, 2022.

The lawsuit also targets David Faigman, the school’s dean and chancellor, along with all of its trustees – who voted for this change after learning about Serranus Hastings’ role in the slaughter of Native Americans[4] in the mid-19th century. Rebranding is one way that the school is actively seeking reconciliation with the Yuki people[5], whose communities were harmed at that time. It filed a motion to dismiss the suit on Nov. 2, 2022[6].

The lawsuit cites an 1878 agreement[7] with the state of California to create and fund the law school, which promised Hastings’ heirs US$100,000, plus interest, should the school ever “cease to exist.” One hundred forty-four years later, that would amount to $1.7 billion[8], the San Francisco Chronicle has reported. The lawsuit also disputes the evidence about Hastings’ ties to the slaughter of Indigenous people and says this change would waste tax dollars.

The Conversation U.S. asked nonprofit law scholar[9] Terri Lynn Helge[10] to explain why it’s so hard to sever prior arrangements[11] with donors [12] – even when more than a century has elapsed.

What usually happens when charities face pressure to distance themselves from past donors?

Charities face a dilemma[13] when donors become an embarrassment. They need to decide whether to keep the money given by the now-tarnished donor or return the tainted funds.

But returning that money just because the donor’s reputation is now sullied may get the charity receiving the funds into trouble with state regulators[14]. Further, the charity may not simply rebrand[15] the program, building or fund bearing the donor’s name when that philanthropist becomes controversial.

These complications are one reason some charities opt to maintain a donor’s name after high-profile falls from grace. Almost 10 years after the Enron scandal[16] broke, for example, the University of Missouri at Columbia appointed[17] its first Kenneth Lay chair in economics[18]. The professorship was named for the late founder of Enron[19], a company that imploded amid a massive accounting fraud scandal. The source of the funding for that professorship was $1.2 million of Enron stock[20] Lay had donated in 1999, two years before the company’s demise. Despite Enron’s collapse[21], which led to the dissolution of the Arthur Andersen LLP[22] accounting giant, the University of Missouri declined to terminate this professorship – which still endures[23].

But times have changed. And many universities and other charitable organizations now look for ways to distance themselves from controversy, sometimes at great cost.

Do donors or their heirs ever give permission for this kind of rebranding?

Yes, but it usually involves a lengthy negotiation process.

In a statement, the museum said it was taking this step after reaching an agreement with descendants of Mortimer and Raymond Sackler[28], two brothers who made a fortune through sales of OxyContin – a prescription drug at the center of the opioid crisis.

The Metropolitan Museum of Art reached an agreement with Sackler family members in 2021 to strip their name from seven exhibits because of its role in the opioid crisis. AP Photo/Seth Wenig[29]

Are there other ways to avoid being sued for taking down a donor’s name?

Yes. A charity can ask a court to grant permission to override restrictions on naming rights in legally binding agreements in a special kind of legal proceeding. Under what’s known as the “cy pres[30]” doctrine, courts have this power if the charity can show that restrictions in those agreements have become impossible to uphold.

Charities that lose in court[31] may end up paying significant sums to rebrand. An example is Vanderbilt University’s[32] 2002 attempt to rename Confederate Memorial Hall, a building the school had acquired following a merger with George Peabody College for Teachers in 1979.

Peabody had received a donation of $50,000 from the United Daughters of the Confederacy in 1933 to fund its construction, with the condition that the building carry the moniker in perpetuity. After Vanderbilt publicly announced that it would remove that tribute to the Confederacy from the building’s name and walls, the organization sued to enforce the terms of its gift agreement.

A decade later, anonymous donors gave Vanderbilt the $1.2 million[34] it took to get rid of what Chancellor Nicholas S. Zeppos called “a symbol of exclusion, and a divisive contradiction of our hopes and dreams of being a truly great and inclusive university.”

If Hastings’ descendants prevail with their lawsuit, the damages paid might be more than 1,000 times the amount Vanderbilt ultimately paid to rename Confederate Memorial Hall.

How can charities avoid getting ensnared like this in the future?

The complications that can arise from tainted donors are an incentive for charities to require “morals provisions[35]” in naming rights agreements. These provisions let charities remove donors’ names from buildings, endowed fellowships or scholarships or return donated funds in the future, following allegations of or convictions for immoral or illegal behavior by donors.

But activating those provisions can be challenging, because it is hard to clearly define[36] what constitutes morally repugnant behavior and who gets to decide when that has occurred.

Alternatively, charities can set expiration dates in all their naming-rights agreements that allow the removal of a donor’s name after a specified period of time. The Louvre, a French museum, restricts naming rights to a maximum of 20 years[37]. That allowed it to quickly remove the Sackler name[38] from spaces bearing the family moniker because of the family’s role in the opioid crisis[39].

Otherwise, universities, museums and other charities must choose among a few bad options.

Some passages in this article originally appeared in an article published on March 28, 2019[40].