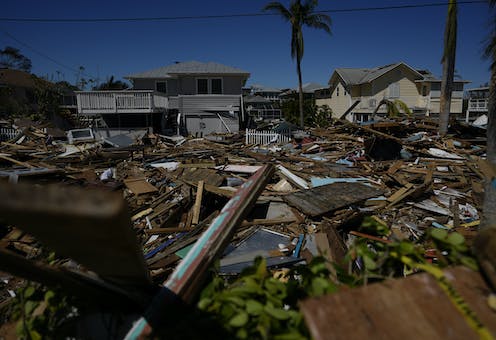 Friendswood, Texas, is the type of community that one might think of as a “best case scenario” when it comes to recovering from a disaster.

It is a small tight-knit town with well-resourced residents and a strong social infrastructure of local institutions that provided a huge outpouring of support[1] in the immediate aftermath of Hurricane Harvey in 2017. It is also the type of community[2] that typically receives a disproportionately high amount of aid from the Federal Emergency Management Agency in the wake of a disaster.

But in a new book[3] based on interviews after Harvey devastated[4] the area, we found that households in Friendswood ended up on starkly divergent financial trajectories.

Our results suggest residents of Florida and others in the path of Hurricane Ian – especially those without flood insurance[5] or significant aid from social networks – may struggle for years or have to take on large new debts to pay for repairs. Our findings also point to solutions to prevent the growing number of climate-related disasters from worsening inequalities in the U.S.

From 1980 through July 2022, the United States experienced 332 disasters[6] that each caused at least US$1 billion in damages – and their frequency is escalating.

Ian will certainly be added to the list after barreling across Florida, causing tens of billions of dollars[7] in estimated damage and the deaths of at least 44 people[8].

While the dollar amount may be astronomical, what it does not capture is the ways that this cost is borne unequally[9], both within and between communities. In other words, the total price tag doesn’t tell us how Ian will exacerbate existing inequalities[10].

Research after past disasters like Hurricane Katrina has shown that not only are poor and nonwhite communities often the hardest hit[11] by disasters, but also that FEMA aid disproportionately goes to whiter and wealthier communities[12] of homeowners in the aftermath.

So it’s clear that disadvantaged communities will always be hurt the most when disaster strikes.

What is less clear is whether inequality also grows within communities, especially those that typically receive more support and resources. Climate change is making these types of areas more vulnerable as storms like Ian grow in intensity and scope[13]. Yet, little is known about how recovery works in relatively well-off places, which generally have more resources to rebound after disasters.

This is what motivated us to examine recovery[14] in Friendswood, a middle-class, majority-white suburb outside of Houston that flooded during Hurricane Harvey in 2017. We interviewed 59 households multiple times over two years after the storm to understand the recovery process and the financial consequences of disaster for residents in a well-resourced place.

After Harvey, we found that Friendswood residents were on three different recovery trajectories.

About 47% of the households we interviewed two years after the storm had fully recovered – some had even grown their net worth. A second group, making up just under a quarter of our sample, was mostly recovered, with some repairs remaining but most of the work completed. In this group, many were likely to have new outstanding debts taken on during the repair process. A third group of residents, around 18%, was still living in homes without complete walls or floors – repairs they were uncertain they would ever be able to afford. And a small percentage had moved after the storm.

Pre-flood advantages like having a higher income certainly helped determine which group households ended up in. Residents with more financial resources before Harvey tended to fare better than their less-well-off neighbors.

But we also found that a few additional factors played a key role in determining whether a given household had completed repairs.

One of the most important was flood insurance[15]. We know from past research that higher-valued homes are more likely to be insured[16]. We found this to be the case in Friendswood as well.

While uninsured households could apply to the Small Business Administration[18] for low-interest home repair loans, not all disaster-affected residents were deemed eligible. And we found that many who did take out an SBA loan ended up with over $100,000 in new debt.

One year after Harvey, when a resident had to start repaying her SBA loan, she told us that it made a big dent in her family’s monthly budget – “That’s a $400 payment every month that we have to make,” she said. “So, I mean, it’s just tight.”

The importance of social networks

Another key factor in recovery was assistance from social networks[19]. This included cash donations, labor and building materials to help repair homes, child care and food preparation, as well as emotional support that came from family, friends, neighbors and other community groups that people were connected to.

In some cases, this assistance was robust enough to help flooded residents fully repair their homes even when they did not have significant financial resources of their own.

For example, one older Friendswood resident, despite not having insurance, was one of the first in her neighborhood to move back into her repaired home because her brother provided building materials, financial assistance and labor.

“My brother fronted the cost for me until FEMA came through,” she told us, adding, “Had it not been for my brother, I don’t know what I would have done.”

Other residents relied heavily on networks through church, work or their children’s schools for help rebuilding. But not everyone was connected to a broad network that could provide support.

Many of the residents who still had major repairs left two years after Harvey tended to be in the lowest-income brackets and those without robust social networks.

They also typically did not have flood insurance or access to an SBA loan to help cover repair costs. Some of these households applied for SBA loans but were denied. SBA determines eligibility based on a number of factors, including credit scores and ability to repay, which means that some households with the greatest need for assistance are denied loans. With access to fewer financial resources, most in this group had relatively little room in their budgets and were uncertain when, or if, they would ever be able to complete these repairs.

Social scientists refer to this as the “Matthew Effect[20]” – a term that captures the pattern when those who already have advantages tend to accumulate more, while the disadvantaged fall further behind. This creates a growing disparity between the advantaged and disadvantaged during the recovery process.

To avoid these problems, we believe policymakers could do more to inform homeowners of their flood risks and available insurance options[21]. But the U.S. cannot insure its way out of this problem.

We believe it’s also important to support and expand managed retreat[22] policies, which provide resources[23] for residents and communities to move away from the most vulnerable places. In addition, the U.S. could design more equitable approaches to disbursing FEMA aid and SBA loans to ensure low-income and nonwhite households have better access. This would help minimize the inequalities that emerge both within and between communities in the wake of disaster.

Even in a middle-class community like Friendswood, which seemed well positioned to recover from disaster, residents still fell through the cracks.