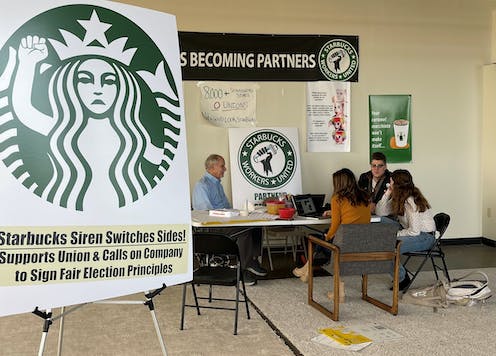 Starbucks Workers United won its 100th election on May 27, 2022[1] – fittingly, in Seattle, the company’s hometown. And the union has notched another 46 victories[2] in the just over two weeks since then. It comes six months after organizers won their first two union victories[3], in Buffalo, New. York.

Although each unionized workplace is small, with a couple dozen employees apiece, the campaign is already, by my reckoning, one of the most successful unionizing efforts in recent U.S. history, with victories in 28 states. Over 100 additional Starbucks outlets have petitioned to unionize and are awaiting elections in the coming days and weeks, and several other votes are awaiting resolution. Starbucks has strongly opposed the campaign[4], and the union has lost about 22 elections so far.

The overwhelming success of the Starbucks labor organizing efforts is inspiring workers at other retailers[5], such as Amazon[6], REI[7], Apple[8] and Trader Joe’s[9], which have all seen an increase in organizing activity or even their first unions.

When the Starbucks unionizing movement was in its infancy, few observers believed[10] that the campaign could spread so quickly[11] or win so many elections, often by huge margins[12]. Indeed, a few years ago, most union officials would have thought it impossible to organize a young and often transient low-wage service sector workforce spread across almost 9,000 small stores[13]. And most union drives in recent decades, such as at Walmart[14] and FedEx[15], have failed.

So why has the Starbucks campaign been so much more successful?

As a scholar who has studied[16] corporate opposition to unions for 20 years, I believe there are five key reasons.

The Starbucks campaign would, I believe, likely not have been successful three years ago, before the pandemic hit.

After March 2020, service workers faced increasingly difficult, stressful and dangerous workplace conditions. For example, they were often tasked with enforcing mask and vaccine mandates[17] and dealing with unruly customers who refused to comply. And their jobs on the front lines put them at greater risk[18] of contracting COVID-19. At the same time, surveys showed many workers didn’t think their employers were treating them with respect[19] or providing adequate safety equipment[20].

As a result, record numbers of workers – especially in the service sector – began quitting their jobs[21] in mid-2021 in what became known as the “great resignation.” The labor shortages created more pressure on overworked employees, and the huge rise in mobile app orders[22] compounded the workplace stress for Starbucks baristas.

These workers that didn’t quit their jobs, however, became more emboldened and seized an opportunity to get organized. Today, support for unions in the U.S. is at its highest since 1965[23], at 68%.

Starbucks Workers United’s strategy involved unionizing one store at a time by using a worker-driven model[24] that could be replicated easily and quickly.

At the start of the campaign in December 2021, Starbucks management tried[25], and failed[26], to require the union to win a majority of all Starbucks workers in Buffalo – not just those at individual stores. It’s likely pro-union workers would have lost such an election[27], but the National Labor Relations Board rejected Starbucks’ arguments[28].

This allowed workers to organize each store one at time and develop a replicable model, enabling it to spread rapidly. In fact, when commentators describe the campaign as spreading “like wildfire”[29] or similar terms[30], it obscures the innovative and deliberate process[31] that has been behind its remarkable success.

Workers typically find out about the campaign through traditional or social media, and then reach out to organizers behind the campaign. They then have a Zoom meeting with a worker-organizer at a union store who explains how to print cards, how to discuss signing up for the union with co-workers, how to write a letter to Starbucks CEO Howard Schultz requesting union recognition, and how to petition the NLRB for an election. This pattern has been repeated multiple times throughout the country, even in places in which private-sector unions are rare[32].

There is no obvious reason why a similar model could not work[33] at other nonunionized companies with young, progressive workforces, such as Trader Joe’s[34], Apple[35] and REI[36]. Indeed, Trader Joe’s employees at a Massachusetts store just filed to create the company’s first union, and REI employees in Manhattan voted to form the company’s first unionized store in March 2022.

A group of fired Starbucks employees celebrate the result of a vote to unionize one of the coffee company’s locations on June 7, 2022, in Memphis, Tenn. Starbucks says the ex-employees were fired for violating company policies, but the so-called Memphis Seven say they were let go in retaliation for unionization efforts. AP Photo/Adrian Sainz[37]

Another factor that helped Starbucks pro-union workers is the retailer’s self-proclaimed progressive reputation[38], as shown through its public support for issues such as LBGTQ rights[39] and racial justice[40].

Naturally, this has attracted workers[41] who tend to be young, college-educated[42], more progressive[43] and thus more inclined to support a union. The flipside of Starbucks’ ostensible progressivism is that its efforts to prevent workers[44] from forming unions[45] are seen by some employees as hypocritical.

In addition, Starbucks’ tendency to speak out on progressive issues has increased media attention[46] surrounding workers’ efforts to organize[47] and Starbucks’ reaction to them[48]. This has helped the campaign spread a lot faster and farther, encouraging like-minded baristas elsewhere to join.

4. Fellowship of the baristas

The campaign has also benefited from the strong sense of community that already existed among Starbucks’ young staff[49].

Starbucks has long fostered a sense of camaraderie[50] between its workers. For example, it calls them “partners,” implying they aren’t just casual employees but play a meaningful role in the company. Lawyers and hedge funds use the term partners to refer to employees who have an ownership stake[51].

Although workers said they often felt like they weren’t treated as such[52], this helped create a close-knit community at individual workplaces. That’s why most of the union votes were either overwhelming or unanimous[53]. In the words of the union, the campaign is about “partners becoming partners[54].”

The old way of organizing was dependent on union organizers approaching workers at each location, making it slower and much more cumbersome[57]. Some labor leaders are now more ready to embrace organizing at a more grassroots[58], worker-to-worker level.

When workers take the lead, it means you’re more likely to have local buy-in – the organizers are inside the workplace and known and trusted by their co-workers – and doesn’t require them to wait for other union leaders to recognize interest in forming a union. And in this way, the activist workers don’t simply feel like they are part of a union but they themselves are the union[59].

For these reasons, I believe there is every chance that eventually a majority of Starbucks stores will become unionized. And if the Starbucks model continues to be successful, it could encourage workers at other companies to adopt the same playbook[60]. In fact, we may be on the cusp of a union revival like American workers haven’t seen in almost a century.