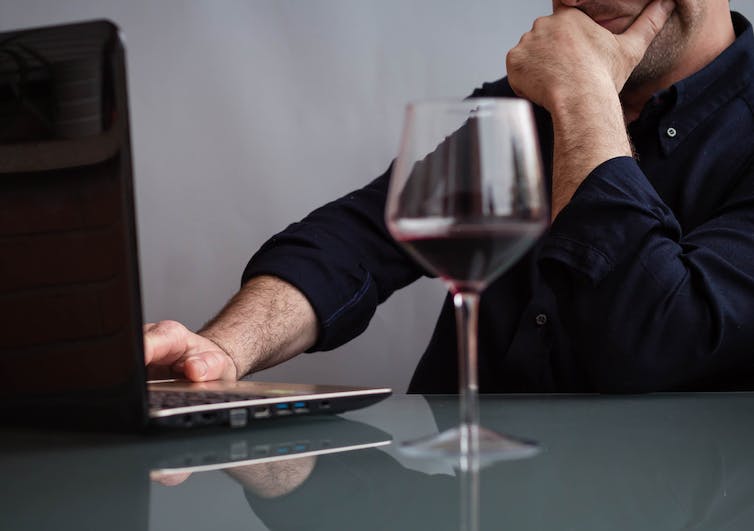 The Downing Street “partygate” scandal[1] has shown how alcohol use can be embedded in the everyday workplace. The internal investigation being led by senior civil servant Sue Gray is expected to make clear how normalised the culture of drinking has become within the centre of government under Boris Johnson’s administration.

But this culture of drinking in the workplace is not restricted[2] to government, of course. We know that drinking carries a heavy cost for employers in terms of work absences[3] and reduced productivity[4] – including when it is happening outside work.

Alcohol interferes[5] with sleep, particularly the quality of sleep, making people tired, less able to concentrate, and less likely to do well at tasks that require motor coordination. And more generally, alcohol misuse is a leading cause[6] of disability, ill health and death in the UK.

One major concern is that the COVID pandemic may have made it easier for employees to drink more alcohol while working from home. The World Health Organization recognised some time ago[7] that this change in working practice could lead to a rise in alcohol consumption and provided advice on how to manage this.

New research[8] covering the period of the pandemic has subsequently revealed the dramatic rise in drinking among those who were deemed to be high-risk drinkers prior to the pandemic. These risks include not only developing psychological and physical dependence but a range of health problems[9] including cancer and heart issues.

By the end of October 2021 in the UK, this group of high-risk people rose to an estimated 8 million – up from 6 million in February 2020. It’s easy to imagine how changes such as working from home could have contributed to this.

Many employees have seen their colleagues less frequently as meetings and conversations have been conducted virtually, meaning that problematic drinking is less likely to be detected or managed. We also know that people tend to pour larger measures[10] when at home and lose the social cues around the pace of drinking which they would get in a pub or bar.

Workplace drinking got worse during the pandemic. Olga Serdyukova Italia[11]

It’s not just about having the opportunity to drink more that the change in working practice has produced; it is the additional toll that this and other restrictions have on workers’ mental health. Alcohol is very effective in the short term for mitigating feelings[12] of isolation, unhappiness, stress and a lack of hope – all factors that are known to have risen[13] during the pandemic.

Yet in the longer term, drinking can increase[14] the risk of anxiety and depression. So while some people may use alcohol to cope with work-related stress and other negative feelings, it can end up contributing to them.

Early in the pandemic, the Chartered Institute of Personnel and Development (CIPD) published a report[15] highlighting the need for UK employers to have effective policies in place for problems with alcohol. The research found that in the previous two years, one third of employers had disciplined an employee and a fifth had dismissed an employee due to alcohol use. Training for line managers was particularly poor, with only 12% having been given specific training on procedures and policy in relation to alcohol.

This raised the issue of how we all view problems with alcohol. Too many people, including employers[16], see getting drunk as self-inflicted or a “bad” choice made by the employee. This view of alcohol as a set of one-off incidents at work which requires employer intervention[17] unfortunately misses the reasons why people develop problems with it.

Instead of viewing alcohol problems as a disciplinary matter, employers need to see them as a health issue. Though there is no legal requirement that employers have policies to deal with alcohol at work, or allow time off work for treatment, these kinds of supportive policies are shown to have positive outcomes for employees and employers. The CIPD report[18] showed that where employers had referred a worker to specialist alcohol treatment, 69% continued to work for the organisation.

Of all the drugs that people use, alcohol takes[19] more time and regular exposure to develop a dependency. Many people at high risk are functional drinkers: they continue to work, have relationships, and outwardly appear unaffected.

This can make it difficult to discern when they have a problem, and it will often require the person to own up to it first. Many won’t want to do this because it comes with so much fear and stigma[20], but it’s more likely to happen where they know their employer will respond supportively and without judgement.

Hangovers are too often seen as a disciplinary matter. Erich Sacco[21]

The only intervention the government has made on alcohol during the pandemic is to ensure uninterrupted access to the drug. As COVID took hold in 2020 and restrictions were put in place, the government placed off-licences in the same category[22] as pharmacies, deeming them to be “essential services”. So although pubs, bars and restaurants were closed people could still buy alcohol from off-licences and supermarkets.

The focus on “partygate” is a good moment for employers to reconsider their policies and procedures for dealing with alcohol and work, but also how far problems such as work-related stress exacerbate problems with alcohol. As has been apparent from all the recent Downing Street headlines, the government and civil service seem to be no exception.