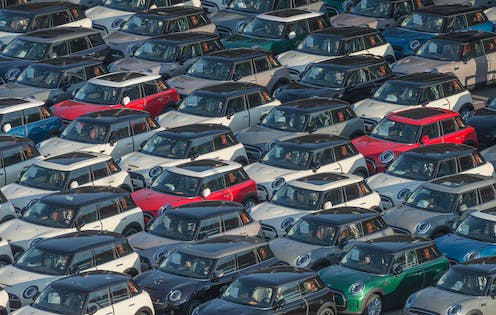 Car manufacturing in the UK stalled dramatically last year. The head of the industry trade body described the situation as the “toughest in decades”, and the numbers certainly back up his claim[1].

The latest car registration figures show that 2021 was up just 1%[2] on a COVID-ravaged 2020 – and production actually went into reverse gear.

Overall, car making up to November 2021 was 6.2% below that of 2020, with 797,261 cars made – worse even than a year in which UK production was so badly affected by factory stoppages caused by the first lockdowns.

This matters not only for the 180,000 people[5] employed directly in auto manufacturing or the 864,000 jobs across the wider automotive industry. The industry accounts for 13% of total UK export of goods, worth £44 billion, and invests £3 billion each year into automotive research and development.

Nor is this just an issue for the UK. The global microchip shortage[6] had a major impact in 2021, and could cost the global auto industry as much as US$210 billion (£155 billion) in lost sales[7] in 2022, with output curtailed by almost 8 million vehicles.

Now the chief executive of the Society of Motor Manufacturers and Traders, Mike Hawes, has called for more support for the industry[9]. He also flagged up risks around new customs arrangements between the UK and EU that come into effect from January 1 2022.

He said: “With an increasingly negative economic backdrop, rising inflation and Covid resurgent home and abroad, the circumstances are the toughest in decades.

"With output massively down for the past five months and likely to continue, maintaining cashflow, especially in the supply chain, is of vital importance. We have to look to government to provide support measures in the same way it is recognising other COVID-impacted sectors.”

Looking ahead, a new production outlook[10] report forecasts that UK car and van production could edge above one million in 2022, and even reach 1.2 million in 2024. Back in 2016, the UK produced 1.7 million[11] a year. But that now seems a very long time ago, with output damaged ever since by a combination of global markets, Brexit uncertainty, and COVID-related supply chain issues.

Longer term, the auto industry has to deal with the most pronounced change in its history, with a rapid shift now underway towards battery powered electric vehicles. The UK government has set a 2030 deadline[12] to phase out the sale of petrol and diesel cars, but policies to actually get there seem half-hearted.

Progress is not helped for example, by the slow speed[13] of charging infrastructure roll out, or the big cut in subsidies available for new battery electric vehicles which means many do not qualify for support[14].

On a positive note, British production of battery electric vehicles and hybrid cars (with a combustion engine and a battery) took a record share[16] of production in 2021, accounting for around a third of all cars made in November, and more than a quarter (26%) over the year.

Of those, battery electric vehicle output was up in November by 53% to 10,359 units, hitting a new high of almost 14% of production, more than double the level a year ago. UK-based car makers like Nissan, MINI and the London Electric Vehicle Company produced more than 60,000 zero emission vehicles in 2021.

But UK battery production is lagging behind[17] major investment across the EU, which is aiming to be independent in battery production by 2026, and has brought together seven countries to form the European Battery Alliance[18]. And while there is confirmed investment in just one battery “gigafactory” in the UK, there are at least 15 under construction in countries including Sweden, France, Germany, Hungary and Poland.

Investment in battery production in the UK will need to be accelerated dramatically given the shift to electric vehicles now underway. Beyond that, better and more joined-up[19] support for the auto industry will be needed to get to 2030[20] with a viable mass UK auto industry intact.