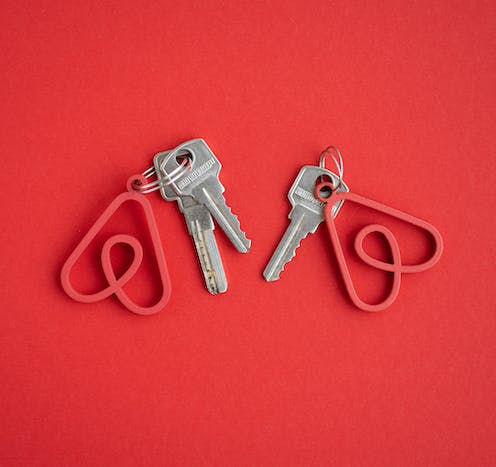 Around 2.8 million households across England casually rented out part of or their entire home on platforms such as Airbnb in 2017-18[1].

These platforms are part of the “sharing economy” and have opened up new avenues for tourism. Since its founding in 2008, Airbnb has enabled millions of “hosts” around the world[2] to let out their spare space – whether this is an extra bedroom or an entire home.

In 2015, the UK government deregulated short-term rentals in London, allowing homeowners to share their home for up to 90 nights per year without planning permission. However, it is not just private homeowners who are taking advantage of this system.

Research[3] has found that instead of offering their property as a longer-term rental, some landlords were moving their houses on to Airbnb where they can make higher profits. This raises concerns about the impact of short-term rental activity on housing availability and affordability in London.

In our new research[4] at Edge Hill University, we looked at the growth of Airbnb activity in London to understand in greater depth how properties are being shared on the platform – and by whom. Using data provided by InsideAirbnb[5] and author and researcher Tom Slee[6], we analysed the Airbnb platform for listings in London between 2014-19.

Our findings reveal worrying trends amid considerable growth in Airbnb activity across London. Since 2014, there has been a 571% increase in the number of entire home listings, with nearly 45,000 entire properties available to rent. There has also been substantial growth in what could be classed as “commercial” activity rather than occasional home sharing.

An Airbnb spokesperson told The Conversation: “This research uses a flawed methodology focused on calendar availability data gathered from third parties. In reality the typical entire home listing on Airbnb in London is let for just 35 nights a year and there are very few exceptions where a listing is let for 90 nights or more. Airbnb was the first platform to introduce a 90 night cap to voluntarily enforce rules in London and has for years led calls in partnership with City Hall for a short-term let register to be introduced.”

We were able to break the data down further by examining the impact on different local areas within London. We found that there is a concentration of entire property listings provided by hosts with two or more properties in a few London boroughs, specifically Westminster (23% of listings), Kensington and Chelsea (15% of listings) and Camden (10% of listings). Other researchers found similar results in other large cities including New York[7], Madrid[8] and Berlin[9].

London’s rental market is being affected by landlords taking their properties to platforms like Airbnb. Brookgardener/Shutterstock[10]

The activity we found in Westminster, Kensington and Chelsea and Camden is likely to lead to displacement for communities in these neighbourhoods. Researchers term this tourism gentrification[11], where tourists displace residents from their local communities through increases in rental prices[12] and decreased housing availability[13], making it difficult for people to find an affordable home to rent in their local neighbourhood.

Our findings reveal that a significant portion of the Airbnb activity in London is not what could be seen as the authentic sharing of homes, where the asset is being underused (a spare bedroom, for example), but commercial activity. It is unlikely that local communities can access and realise the benefits of the sharing economy as intended.

Airbnb has taken action to limit this activity by enforcing the 90 night limit in London, by automatically stopping properties being booked for more than 90 nights without evidence of planning permission. But there is evidence that some landlords are bypassing the system[15] by setting up new listings for the property or using multiple platforms to advertise the property. There is a need to limit landlords from using homes on these platforms for the long term, by using a local registration and licensing scheme.

Airbnb and similar platforms could be a force for good, by enabling people to access unique places, and by sharing excess capacity in existing homes. However, the platform enables landlords to make higher profits by choosing tourists over providing homes for the long term – contributing to the gentrification of neighbourhoods and displacing local communities through higher rents and property prices.

Governments across the UK are planning on introducing significant rental reforms, such as the Renters Reform bill in England. Further reforms could drive more landlords to use Airbnb over providing long-term housing. Care must be taken to ensure that further properties are not lost from the residential sector.