Lynnwood, Washington--(Newsfile Corp. - November 15, 2021) - Empire Warriors has announced a Revolutionary, Minimalist NFT Card Game that offers unique bonuses with its Play-to-Earn Business Model. The gaming industry has been mainly focused on entertainment, with only the owners benefit from the market. Users spend lots of time on games without any monetary benefits yet are often denied access to the game until an access token is made. Empire Warriors is incorporated on free-to-play, play-to-earn models and NFT Gaming. Game lovers can now access the game without paying any initial money and still profit from the competition. 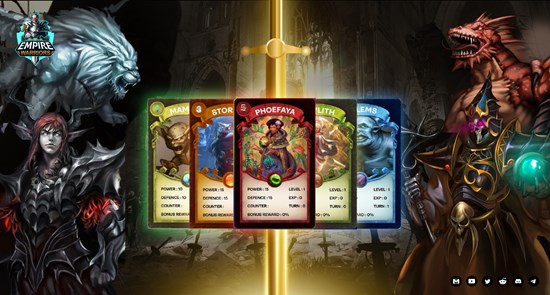 Empire Warriors is the first minimalist NFT card game inspired by the play to earn trending era, NFT, and built on blockchain technology. Players must collect cards for themselves, and each card will be a unique parameter that players use to fight in battles. At the same time, each card will have an ID code on the blockchain system along with the owner's identity. Based on this technology, players can safely exchange, buy and sell virtual assets with each other. These transactions are all recorded by the system. That's why Empire Warriors' slogan is "Think Less, Earn More."

Players will choose 1 NFT card in their collection to fight the boss (1 vs. 1 ). The winner is determined based on the card stats of the player and the boss. In addition, Empire Warriors also allows users to bet on the outcome of the battle before opening the card to increase the reward for the player.

This mode will randomly match players into a room with one other player and use cards from their collection to battle their opponents. The victory will be decided based on the total attack and defence of the card.

Players will receive EMP when they win against other players, which will be where player gather materials for card upgrades (Garnet and Spinel gems).

Players can place cards in lands in the stacking mode to increase the level of that card. The higher the card level, the higher the stats and the higher the win rate in the battles. In addition, Empire Warrior allows players to choose the staking time that the game maker has set.

If a user owns a card with unsatisfying attributes, it can be upgraded through this screen. Players can obtain materials, including Garnet and Spinel gems, through PVP mode or on the marketplace.

In this mode, players can own their land and create a squad from their NFT cards to fight the boss squad created by AI technology to ensure objectivity. With five areas corresponding to 5 card systems, challenge those who consider themselves wise, winning based on the player's choice.

This unique game attracts many users not only because of its attractive graphics but also because of its thrilling and minimalist gameplay. Besides the entertainment, it will also allow users to earn a passive income while playing games and having fun. It gives an immersive gaming experience to its players by taking them into a virtual world of monsters with powerful abilities to battle for fame & fortune.

The team behind Empire Warriors identified the potential of NFT games. They say, "NFT games are trending now-a-days and within no time they will develop beyond anyone's expectations." The platform also enables the high-ranking players to be involved in the Hall of Fame and enjoy rewards.

To view the source version of this press release, please visit https://www.newsfilecorp.com/release/103577[7]