The key narrative in Josh Frydenberg’s 2021 budget was the need to use more aggressive fiscal policy to drive unemployment down and wages up.

Two key pieces of data this week indicate how things are tracking.

On Wednesday the Australian Bureau of Statistics published wages data[1]. The Wage Price Index grew 0.6% for the March quarter, or 1.5% over the past year.

This is not a fast enough rate of wages growth to outstrip inflation by much, if at all, on a consistent basis. That’s a problem but not a surprise. The economy in general, and the labour market in particular, is still recovering from the COVID-19 pandemic.

On Thursday the bureau published its labour force data for April. These were more of a surprise. The unemployment rate fell from 5.7% in March to 5.5%.

The unemployment rate had been hotly awaited by economists and politicians alike. It gave the first glimpse of what is happening with employment with the end of the JobKeeper wage-subsidy scheme in March.

The prevailing wisdom among economists was that JobKeeper’s end would see the unemployment rate rise. Treasury had warned it might cost 100,000 to 150,000 jobs. Australia’s leading labour economist, Jeff Borland, feared it could be as high as 250,000[2].

But as University of Melbourne economist Roger Wilkins pointed out[3], JobKeeper wasn’t the only labour-market program that changed at the end of March.

Read more: Post-JobKeeper, unemployment could head north of 7%: here's why[4]

Moreover, income tests were tightened along with so-called “mutual obligation” provisions (requiring people on such benefits to apply for 20, rather than 15, jobs a month).

So the actual unemployment rate falling marginally[5] rather than rising sharply could even be considered stunning. 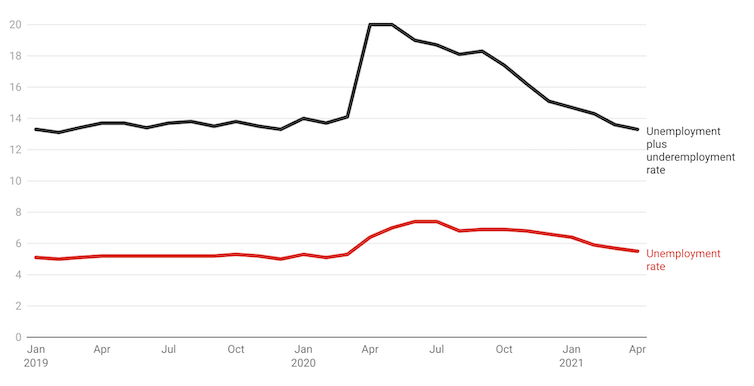 The only real negative news in the April labour force data was that the total number of people employed fell by 30,600 – or 0.2%.

But as the ABS’ head of labour statistics, Bjorn Jarvis, said, this might be due to the end of JobKeeper or simply down to “the usual month-to-month variation in the labour market”.

The same might be said of my favourite labour market statistic – total hours worked. That fell by 13 million hours in April, from 1.806 billion to 1.793 billion hours.

Total hours worked in all jobs

In sum, these figures are enough to make a treasurer want to dance. The single biggest threat to employment bouncing back from COVID-19 – the end of JobKeeper – seems to have been navigated without incident.

More to the point, this was exactly as Frydenberg said would be the case.

Maybe he got lucky, maybe he was just right all along, but it hardly matters.

The labour-market recovery in Australia marches on, and the significant spending in the budget means fiscal policy will not be a handbrake on continued recovery.

When will wages start to rise?

We shouldn’t get carried away. These new numbers reflect just one month without JobKeeper.

There are always time lags in the labour market. The statistics reported over the next two months will be important and instructive.

A 5.5% unemployment rate is still too high to lead to the tight labour-market conditions needed to drive up wages.

How low unemployment needs to get before wages start rising faster than inflation is still an open question.

What seems clear is it will need to be significantly lower than the pre-pandemic level of 5.2%. 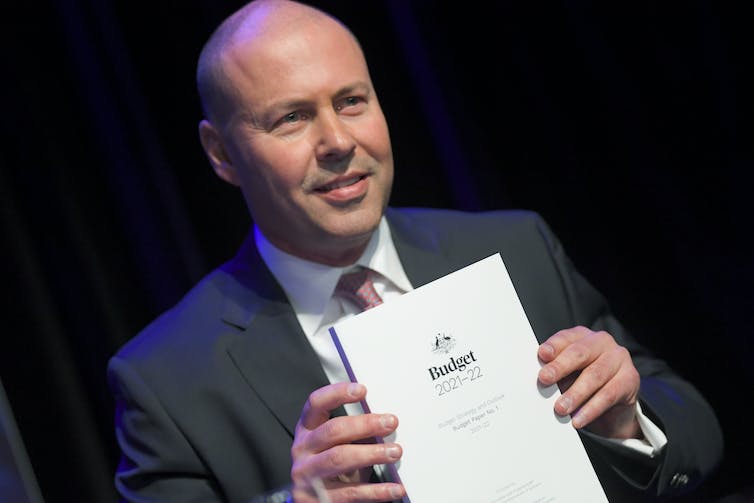 Australian Treasurer Josh Frydenberg has reason to be satisfied with the latest employment figures. Lukas Coch/AAP

Another note of caution is what happens if, as the Reserve Bank and Treasury have predicted, unemployment gets down low enough to put upward pressure on wages.

If this goes as planned it will be good news. If it leads to a general rise in inflation back to the central bank’s 2-3% target range, it will be excellent news.

But if inflation genuinely picks up in a sustained way – as there are hints it will do the United States – the RBA will eventually need to lift interest rates.

Read more: Like a high-wire act, Victoria's budget is a mix of hard work, luck and optical illusion[9]

It is good for the central bank to have that policy option, but using it will come with costs.

If higher interest rates are need to dampen inflationary pressures in the next year – or even two – then the jobs recovery will be halted or reversed, and the RBA’s credibility severely damaged.

As Philip Lowe is fond of saying, “time will tell”.