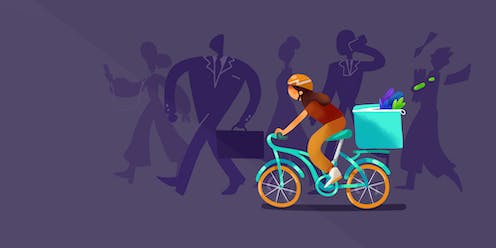 A common narrative nowadays is that standard, secure full-time work is a thing of the past thanks to increasing casual jobs, labour hire, temping and non-standard work contracts that side-step collective bargaining. The ACTU says insecure work has grown to “crisis levels[1]”. A Senate inquiry rehashed[2] the same themes last year. Much of the academic literature is also toeing this line[3].

Yet there is very little evidence that jobs are any less secure than they were decades ago. This is not to deny that some people are leading very precarious lives. Recent stories[4] of wage theft and exploitation, particularly among migrant workers, are truly disgraceful.

But, on the whole, Australian workers are not on some inexorable march toward an uncertain and perilous future of work.

It is true that the labour market has changed. The types of jobs we do and the industries we do them in are very different today than in the ’70s. There’s a lot more part-time work[6]. There’s a lot more women[7] in the workforce. The balance of industrial power has shifted in favour of employers.

These changes partly reflect the restructuring of the economy away from some industries (such as manufacturing) and toward those that offer more part-time and casual work (retail, food, accommodation services and the like). But it is also the result of decades of concerted industrial relations reform, along with sweeping changes in individual work preferences.

Read more: The costs of a casual job are now outweighing any pay benefits[8]

There is no widely accepted definition of precarious employment. After all, every job is precarious to some extent. Nevertheless there are some common proxies for this slippery concept.

The rise of casual employment was an early favourite[9] and is still very relevant. More recent research[10] has broadened the scope to include job tenure and involuntary job-loss rates. Others[11] emphasise workers’ own perceptions of job security. There has also been interest in the rate of self-employment[12], the number of multiple job holders[13] and the share of workers handled by labour hire firms[14].

Four of these measures cut to the heart of precarity:

On their own, each of these measures is a good but imperfect proxy for precarity. Taken together, however, they largely speak with one compelling voice.

The logic of the casual job is to give employers the flexibility to dial their staffing levels up and down as demand fluctuates. Casual workers don’t get annual and sick leave, and generally aren’t protected against dismissal.

Basically, a casual contract lets an employer hire and fire with impunity.

That sounds pretty precarious. You would expect that a labour market of increasing precarity would exhibit a strong trend toward casualisation. In fact, what we have had is strong growth in casual employment during the last two decades of the 20th century and then nothing.

Now there is no doubt that casual work is usually lower-quality work. On the whole, casual workers get paid less, chase more hours[15] and are a little less satisfied[16] than their permanently employed peers.

But that is not evidence that casual employment is becoming ubiquitous.

If employers really were hiring and firing with abandon we should see more people staying in jobs for briefer periods. But we’re not.

In fact, as we can see in the chart below, there has not been a huge spike in workers forced out of their jobs involuntarily. And the proportion that have been in their jobs for 12 months is also staying on trend.

This category should be the smoking gun of a more precarious workforce. It captures anyone who works for themselves, whether in a formally constituted company or not. I have deliberately excluded in this measure those who employ others, so we’re really looking at the cohort of people who work for themselves and by themselves on commercial contract terms.

Self-employment captures all non-employees, such as Uber drivers and Foodora riders, as well as those who were “pushed out” of employment and onto contract.

And yet, as you can see in the following chart, these people are getting harder to find:

The downward trend may seem surprising given one supposed key driver of precarity is the digitalised “gig economy”. One projection[17] was that 40% of the US workforce would be freelancers, contractors or temporary workers by 2020.

But the reality is that, for all their visibility and controversy, gig economy platforms are not yet commanding a significant share of the labour market.

That a higher share of workers are holding down multiple jobs fits with the notion that the economy is becoming “gigified”, with workers increasingly forced to move from job to job to make ends meet.

Yet the data provide little evidence that this is a material shift in the structure of the labour market.

In 1997, the ABS found[18] the proportion of employed persons holding multiple jobs increased from 3.7% in August 1987 to 5.2% a decade later. While the ABS has not published a long-term series since this report, it provided me a custom dataset that shows the current rate is not much higher, at about 5.5%.

The ABS introduced[19] a similar but not identical measure last year – the proportion of jobs in the economy that are “secondary jobs”. This remained stable between 2010-11 and 2015-16, at around 5.6%.

When I started researching the rise of the gig economy and the future of work I was sure that Australia’s labour market was taking a precarious turn. After all, Uber drivers, Deliveroo riders and Airtaskers seem to be everywhere.

There is much to dislike about the quality and quantity of jobs the economy is delivering. But to make this a conversation about precarity is to chase a red herring.

This fruitless pursuit is simply distracting researchers and policymakers from far more pressing questions – like how to create a globally competitive workforce fit for the 21st century.