Easter is the biggest chocolate-buying time of the year. But who’s really paying for the cost of that chocolate?

It is a collaboration between five advocacy groups – Be Slavery Free[2], German-based social justice organisation INKOTA[3] and US environmental outfits Green America[4],Mighty Earth[5] and the National Wildlife Federation[6]. (Macquarie Business School has been working with Be Slavery Free[7] on research into issues of modern slavery).

The report sorts 31 major chocolate makers into four bands – industry leaders,those showing improvement, those needing to do more and the industry laggards – based on their written responses to questions about their polices in six key areas covering social, environmental and governance practices.

Seven companies were in the third rank. Three were in the fourth – Meiji, Itochu and Morinaga (all Japan-based). 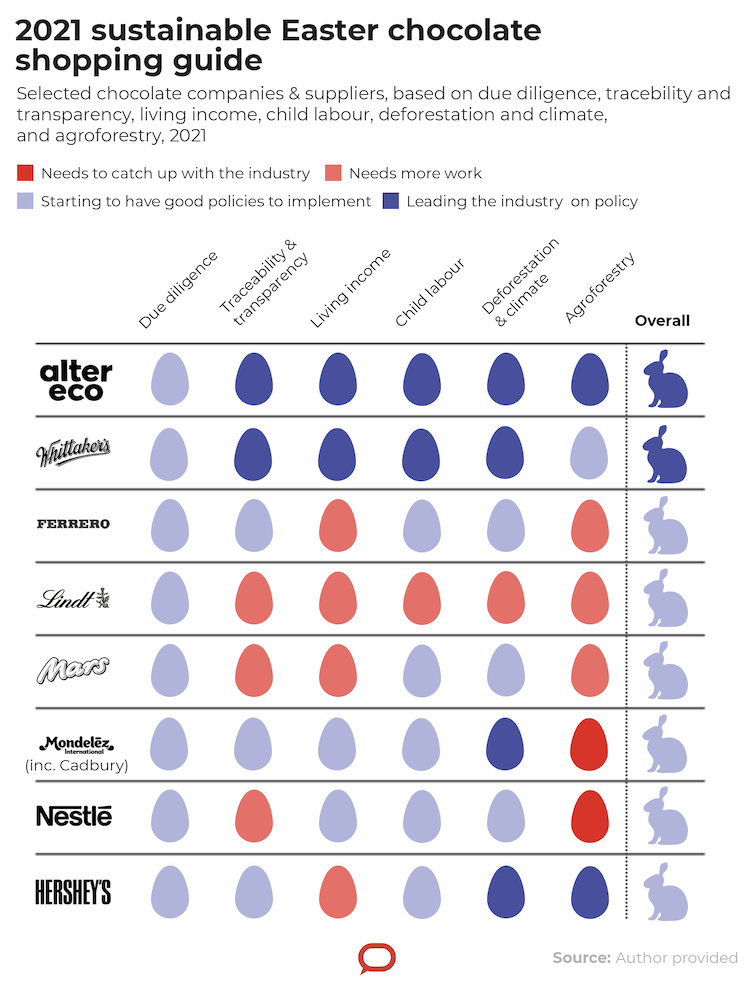 The full list of rankings can be found here[14].

Read more: Sustainable shopping: save the world, one chocolate at a time[15]

Where chocolate comes from

The principle ingredient for making chocolate is cocoa, the powder made from grinding the seeds of the cacao plant. About 70% of cacao is farmed in West Africa, with Côte d'Ivoire and Ghana being the big two producers.

Most cacao farmers make less than US$1 a day (and women even less), well below the global poverty line of $US1.90. An estimated 1.6 million children[16] work in cocoa production in Côte d'Ivoire and Ghana alone. 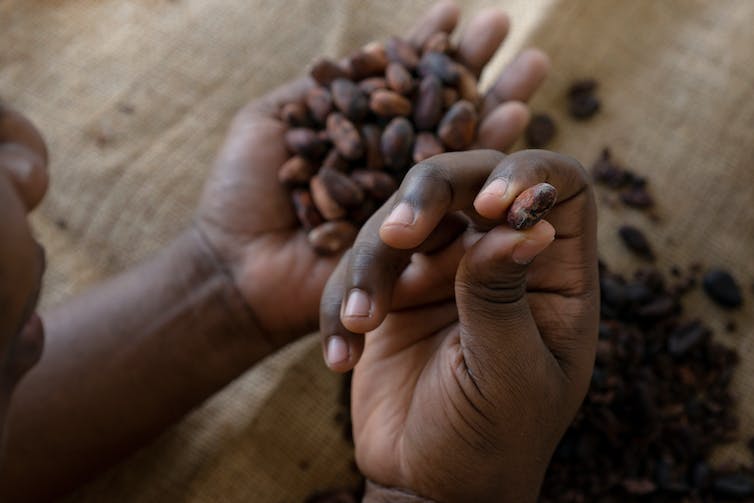 Most cacao farmers earn less than US$1 a day. chomplearn/Shutterstock

Clearing land to farm cacao is estimated to be responsible for about one-third of of the land cleared in Côte d'Ivoire and Ghana over the past 60 years. These countries have now lost more than 80%[17] of rainforest cover. Such deforestation contributes to climate change.

The good news is that most companies and four producer governments (Côte d'Ivoire, Ghana, Colombia and Cameroon) have committed to ending cocoa-driven deforestation through the Cocoa and Forest Initiative[18].

Some action is taking place through agroforestry[19], which involves farming a variety of crops while retaining natural vegetation. This has been shown to reduce the need for pesticides, increase carbon sequestration and improve biodiversity. It is also better for farmers’ food and income security, as they can grow diverse crops rather than relying on just one.

Essential to addressing these social and environmental problems is achieving transparency in supply chains. If a company does not trace and track where products have come from, it cannot know if they have been produced through human exploitation or environmental destruction.

The report rates chocolate makers on two measures related to this – due diligence traceability and transparency. These are crucial as the foundation for all other reforms.

Read more: At last, Australia has a Modern Slavery Act. Here's what you'll need to know[20]

They are also key to Australia’s modern slavery act, which requires businesses with an annual turnover of A$100 million to publish a “modern slavery statement” reporting on the risks of modern slavery in their operations and supply chains, and on the actions they have taken to address these.

But such transparency alone will not be enough if consumers don’t act on that information, and put pressure on chocolate companies through their purchasing decisions.

So go with the good eggs, and avoid the bad.