Prince Harry has copped a pasting in the British media for his new job as “chief impact officer[1]” with Silicon Valley startup BetterUp[2].

His role, and the company’s business model, has been called the “latest expression of woke capitalism” in venerable conservative magazine The Spectator[3]. Other critics have chimed in, derideing the “Prince of Woke Capital[4]” for “surfing a wave of wokery[5] towards an economic abyss”.

Ridiculing people and corporations for being “woke” is, of course, a relatively easy sport for pundits on the right of the political spectrum. Harry’s critics have a point that woke capitalism involves vapid political correctness, even if they are missing its more serious ramifications for social and economic inequality.

The origin of woke

First, let’s recap the meaning of “woke” and “woke capitalism”.

The use of the term “woke” by African Americans has been traced back at least to the 1920s, though Oxford English Dictionary researchers say its meaning[6] as being alert to systemic issues of injustice and discrimination emerged from the American civil rights movement in the 1960s.

It became more widely known with the advent of the Black Lives Matter movement in 2013 (following the acquittal of Florida man George Zimmerman[7] for shooting dead African-American teen Trayvon Martin). 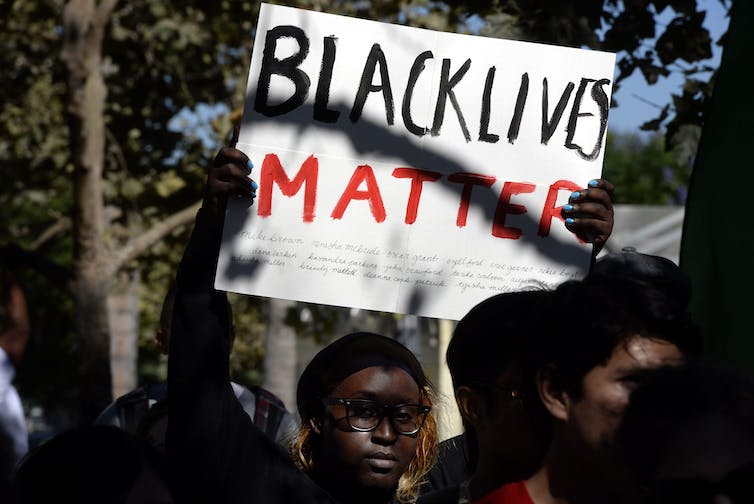 As academics Elaine Richardson and Alice Ragland explain in a 2018 article[8], BLM activists used the hashtag #staywoke to urge fellow African Americans “to remain aware of what is going on around you and in society, more specifically, to remain politically aware or conscious”.

It didn’t take long for “woke” to enter mainstream culture. In 2016 the American Dialect Society declared it the slang word of the year. They defined “woke”[9] as being “conscious, aware or enlightened, especially with regards to matters of social justice and racial inequity”.

In entering the mainstream, though, the meaning of “woke” was soon distorted[11]. Those on the right of politics co-opted it as a term of derision – akin to “social justice warrior” – for people (especially white people) who bragged about their self-righteous positions on political issues.

What started as a serious call to political consciousness was manipulated to become a way of dismissing anyone who professed vaguely progressive views.

This wasn’t limited to individuals. Corporations too could be chastised for being woke.

In 2018, New York Times columnist Ross Douthat[12] wrote about the trend of corporations and chief executives aligning themselves to progressive social concerns, such as immigration and gay and transgender rights, while they continued to push their own economic “self-interest on tax policy and corporate stinginess in paychecks”.

The term “woke capitalism[13]” soon came to express the approach of companies who claim a “social licence to operate” through their public advocacy on social issues, without affecting the economic status quo.

What has all of this got to do with Prince Harry and BetterUp?

Let’s clarify what BetterUp is.

Media reports[15] have described the San Francisco-based company as a startup “that provides employee coaching and mental health assistance”. 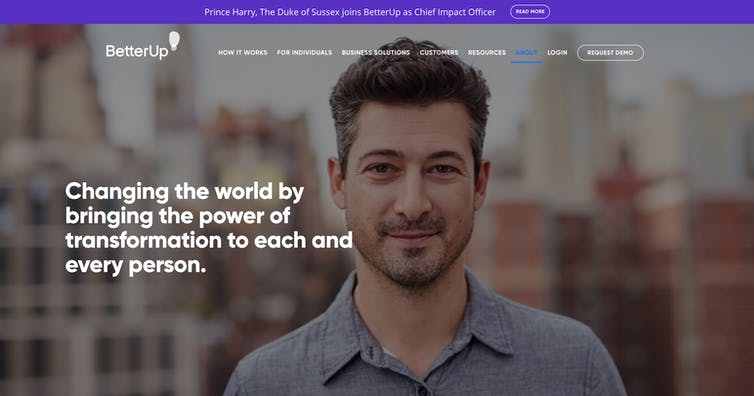 The company itself describes its business[16] as being about “changing the world by bringing the power of transformation to each and every person”. Announcing the prince’s appointment, chief executive Alexi Robichaux declared[17]:

“Prince Harry will expand on the work he’s been doing for years, as he educates and inspires our community and champions the importance of focusing on preventative mental fitness and human potential worldwide.”

The title of chief impact officer – or “chimpo” – comes from the not-profit sector. There’s no one accepted job decription, but such roles generally involve working to ensure an organisation is actually achieving its stated vision and mission.

How does this apply to BetterUp? That’s unclear.

Remove all the marketing babble and this is a company that exists to make a profit. Its core business appears to be an app selling professional coaching services. Its promise is to make people more “positive, engaged, and connected to every part of their lives”[18], both personal and professional.

In reality, the chief impact the prince is likely to have is attracting publicity for the app – helping BetterUp’s bottom line, and Harry’s bank balance.

The way in which BetterUp has wrapped its reality in the language of social concern and human progress bears all the worst hallmarks of “woke capitalism”.

Its business model is all about individual empowerment. This shows no apparent awareness of the need to address systemic social and economic inequities. It would also have us believe we can all “make it” in that world, if we just get the right mental attitude.

Yet the connection between entrenched economic inequalities and myriad social problems including mental illness are well-documented. As the World Health Organization [19]concludes, mental disorders are shaped by social and economic factors, with inequality being chief among them.

Over the past 30 years, according to the United Nations World Social Report for 2020[20], income inequality has become worse in most developed countries.

The irony is that Harry epitomises this inequality, and the limitations of meritocracy. He is the very embodiment of unearned wealth and privilege. Would he have gotten this job except for the family he was born into? Unlikely. How much is he being paid to push the idea that anyone can achieve success? BetterUp isn’t saying. Nor is he.

So while it easy to agree with criticisms of Prince Harry’s new “job” as an expression of woke capitalism, this cannot simply be dismissed as misplaced political correctness.

Inequality is the problem. Woke capitalism is not the solution.