Senator Rex Patrick’s refusal to support the government’s plans to make the scheme permanent gave some hope that this expensive, ideological and cruel policy would end.

Yet in the final Senate vote, it was revealed that Centre Alliance had done a deal with the government to extend the current four trial sites by another two years and to give people in the Northern Territory the option to move from the green BasicsCard[1] to the silver Cashless Debit Card[2] (known searingly in East Kimberley as the “white” card).

The deal, in which Centre Alliance’s Stirling Griff abstained from voting in order to give the government the numbers, will enable people in the Territory to replace one form of compulsory income management with another.

On one hand, the government failed to make the cashless debit card permanent.

On the other, the government can continue to subject people to the card and use the Northern Territory as cover to continue to spend public money setting up the infrastructure needed to roll it out nationally.

Only 10 per cent[3] of the 132 submissions to the latest Senate inquiry[4] backed the extension.

People opposing the Cashless Debit Card have peer-reviewed research on their side finding that by limiting access to cash and restricting what people can use money for, compulsory income management can cause problems from hardship[5], stigma[6] to the reduction of birth weight in babies[7].

The trials underway in the East Kimberley and Goldfields regions of Western Australia, the Ceduna region of South Australia and the Bundaberg and Hervey Bay region in Queensland direct 80% of each welfare payment to a card for use on essentials such as food and health items, leaving only 20% which can be accessed as cash.

The green Territory BasicsCard was introduced in 2007 as part of the Howard government’s 2007 Northern Territory Emergency Response[8], made possible by the temporary suspension of the Racial Discrimination Act[9]. 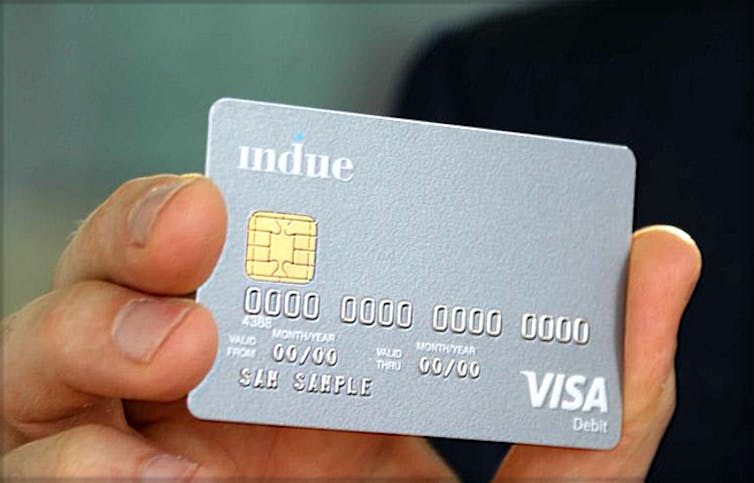 The government avoids acknowledging this by saying they are targeting places rather than people, but that doesn’t change the fact that in the East Kimberley for example, 82% of the people in trial are First Nations people.

Read more: 'I don't want anybody to see me using it': cashless welfare cards do more harm than good[12]

The truth is that rather than being a local initiative, both cards were developed by and lobbied for by Australia’s political and business elite.

The Northern Territory Emergency Response was heavy handed and involved the use of the military[13].

The Cashless Debit Card involved power of another sort, using sweeteners of much needed funding for starved services. One community was told it might miss out on funds[14] if it didn’t support the card.

The limited consultation that followed has been more like select information sessions aimed at selling the card, flying in the face of what ought to be an indigenous right to free, prior and informed consent[15].

Real community participation, let alone self-determination, might have led to the experiment being aborted.

The government picked people to speak on behalf of the communities affected and claimed their views were representative. The views of people who opposed the card or had been forced to endure it were given less prominence.

Read more: Why is the government trying to make the cashless debit card permanent? Research shows it does not work[16]

It seemed disturbingly out of the settler colonial playbook – divide and conquer.

More than A$1 billion has been spent on compulsory income management to date without credible evidence that it works.

And yet the government is persisting.

This rubbishing of the public policy process needs to stop and the political and business elite need to get out of the way to allow genuine self-determined community development to flourish.