We’re told Australia has a progressive tax system – the more you earn, the higher the rate.

That’s how it’s meant to be for income from savings, but in practice it isn’t.

Fresh calculations released this morning by the Tax and Transfer Policy Institute[1] at the Australian National University show that low income Australians in the bottom tax bracket pay a higher marginal rate of tax on income from savings than high earners in the top tax bracket.

It is because of exemptions and special rates, and the alacrity with which high earners take advantage of them.

Super gives the most to the highest earners

The taxation of superannuation drives the results.

Super contributions are generally taxed at a flat rate of 15%. For low earners on an income tax rate of zero, 15% would constitute a considerable extra impost did the government not refund the difference with a tax offset[2] that cuts the effective rate to zero.

High earners on the 47% marginal rate do much better. The tax rate of 15% offers substantial tax relief. For them, it is an effective rate of minus 32%.

Other tax concessions are directed at older Australians, who are often on higher incomes than younger Australians.

Our calculation of the marginal effective annual tax rates actually paid on income from savings is published in a report entitled the taxation of savings in Australia: theory, current practice and future policy directions[3].

It shows that the marginal tax rate high earners pay on additional savings held over a twenty year period is 5.3% of income, on average, whereas for low earners in the bottom (zero) tax bracket it’s 12.2%.

Low earners in the second lowest tax bracket are paying 13.8%. 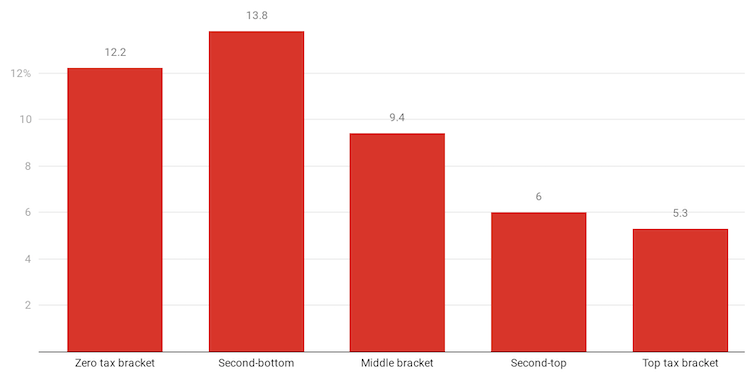 Our report proposes taxing all types of saving at the same flat low rate.

This dual income tax system (a progressive rate for wages and salaries, a flat rate for income from savings) has been used in Norway, Finland, Sweden and Denmark since the early 1990s. Elements of it are used in Austria, Belgium, Italy, Greece and the Netherlands.

• all interest payments would be taxed at 10%

• all dividends, both domestic and foreign, would be taxed at a rate of 10%

• the imputed rent from owner-occupied housing (the benefit home owners get from not having to pay rent that is taxed) would be calcuated and taxed at a rate of 10%. An alternative would be to raise the same amount through a broad-based land tax.

Read more: Housing and tax: why is reform so hard?[5]

Our calculations suggest that if the tax were applied broadly at a rate of 6.2%, it would raise as much as is raised now from taxes on income from savings. If income from owner-occupied housing were excluded, the rate would need to be 10.2%.

But there is no particular reason for the rate to be set to generate as much from savings income as it does now. It could be set to raise more, or to raise less.

The design and implementation of a dual income tax should be considered alongside broader changes to the tax and transfer system. In particular, it should be combined with removing opportunities to re-classify income for tax minimisation purposes. We outline some of the considerations in our report[6].

In the meantime, as steps towards a flatter fairer system of taxing income from savings, the government could consider better targeting superannuation subsidies, replacing real estate stamp duty with land tax and including the family home in the means tests for pensions and other age-related benefits.

Our current approach to taxing income from savings is a mess at best and a serious driver of intergenerational inequality at worst. Some savings tax arrangements are progressive, taxing higher incomes more heavily, and some are regressive.

We want to encourage and reward savings. But we also need to remove the crazy incentives that impel ordinary Australians to take part in distorting and costly tax planning schemes.

Our report outlines a way forward, and steps to get there.