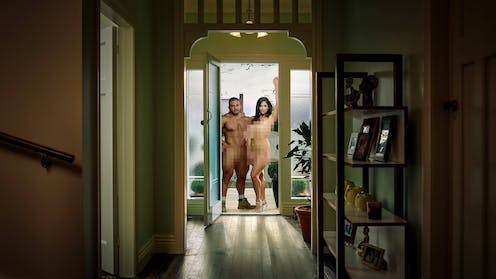 Actually the government turned to video advertising agency Motion Sickness, which in turn created Sue and Derek, who turn up naked at a boy’s house to talk to him about real relationships.

The ad went viral. With more than 22 million views worldwide, it has been praised for its use of humour to address tough issues. Experts have hailed[1] its contribution to the debate about online harm.

It’s just the latest example of a unique advertising culture that makes up for in creativity what it lacks in deep pockets.

There’s more where that came from.

What seems to set New Zealand apart is a combination of smaller budgets, tighter agency-client relationships and a unique sense of humour.

New Zealand advertising budgets are tiny compared to those in larger markets. This rules out epic shoots but puts more emphasis on creativity.

Celebrity endorsements are also rare since New Zealand doesn’t have many high-profile celebrities and advertisers can rarely afford international stars. The exception might be Prime Minister Jacinda Adern and her husband who made special appearances in a comic tourism pitch to “get NZ on the map”.

Rather than rely on endless repetition of an ad, New Zealand agencies would rather spend their smaller budgets on creating and crafting commercials that are engaging, memorable and shareable.

The “Keep it real” campaign is a great example of a good idea being shared organically and having a far larger reach than the modest media budget would have allowed on its own.

Getting intimate with clients

Like the budgets, New Zealand marketing teams are tiny compared to overseas. But, as with the budgets, this has benefits. Smaller teams mean fewer levels of approval and easier access to decision-makers.

Smaller, more intimate teams allow for more open discussions about concepts both within the client organisation and with advertising agencies. As “Keep it real” shows, small and agile teams can collaborate effectively and creatively to address controversial subject matter.

That campaign – which includes billboards, posters, print ads, social media and its own website – took only four weeks to create. This is even more impressive given the client was the government and several of its agencies, including Internal Affairs, the Ministry of Education and the police.

Another important but intangible ingredient is the New Zealand sense of humour and the way it informs local culture. Laconic, understated and self-deprecating, it’s perhaps best summed up in the deadpan laughs of The Flight of the Conchords[9] and the films of Taika Waititi, such as Boy[10] and his vampire comedy, What We Do In The Shadows.

As comedian James Nokise put it[11], “Kiwi humour sort of comes from late-night chats round a table, either in the kitchen, pub, or garage … we’re small enough that we’ve managed to take the kind of intimate family humour and apply it to the whole country.”

Read more: Children can be exposed to sexual predators online, so how can parents teach them to be safe?[12]

This comic sensibility comes through in the country’s advertising. It’s ideal for discussing subjects some people find awkward or hard to tackle – such as talking to children about online pornography.

The timing of the “Keep it real” campaign was also opportune. New Zealand had just entered strict lockdown and people were spending their days learning and working online. A little comic relief was very welcome.

Since then, advertising agencies have been finding creative ways to help local businesses – offering free media space, pay-what-you-want website design, strategic planning and even a way to sell bagels[13] during a pandemic.

The country is now out of its COVID-19 lockdown and Kiwis are being encouraged to get out and support local businesses. Hopefully, this kind of nimble, ingenious and brave creativity will be an integral part of the economic recovery too.