Australian economists narrowly back a wage freeze in the minimum wage case now before the Fair Work Commission[1], a freeze that could flow through to millions of Australians on awards and affect the wages of millions more through the enterprise bargaining process.

The annual case is in its final stages after having begun before the coronavirus crisis and been extended to take account of its implications.

In its submission, the Australian government called for a “cautious approach[2]”, prioritising the need to keep Australians in jobs and maintain the viability of businesses.

The minimum wage was last frozen in 2009[3] amid concern about unemployment during the global financial crisis.

Each was asked whether they agreed, disagreed, or strongly agreed or strongly disagreed with this proposition:

Each was asked to rate the confidence they had in their opinion, and to provide reasons, which are published in full in The Conversation.

Half of those surveyed – 21 out of 42 – backed the proposition, seven of them “strongly”. 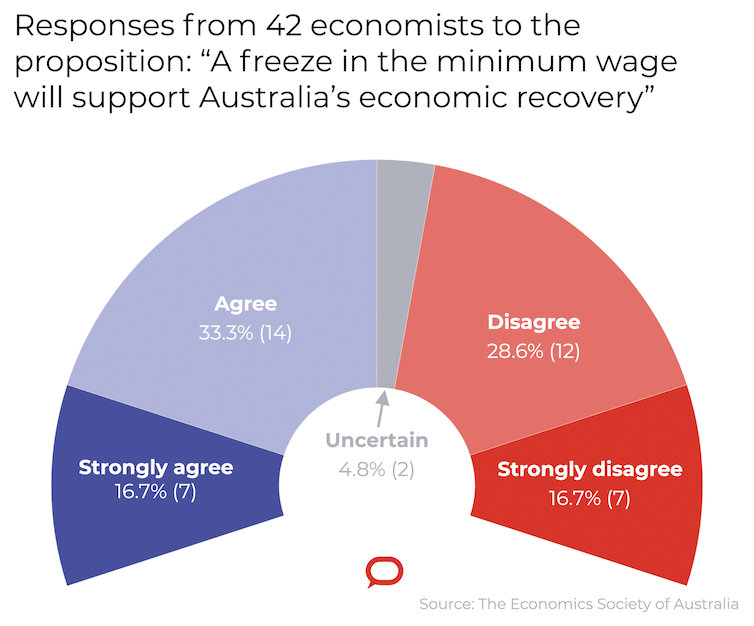 The Conversation, CC BY-ND[5] The minimum adult wage is A$19.49 per hour[6]. There was agreement among most of those surveyed that, in normal times, normal increases in the minimum wage have little impact on employment – a view backed by Australian[7] and international[8] research. But several of those surveyed pointed out that these are not normal times. Bad times for employers… Gigi Foster[9] said many businesses were operating closer to the margin of profitability than ever before, and were likely to stay that way for many months. Rana Roy[10] quoted one the pioneers of modern economics, Joan Robinson[11], as observing in 1962 that the misery of being exploited by capitalists was “nothing compared to the misery of not being exploited at all”. John Freebairn[12] argued that a freeze of labour costs, together with very low expected inflation, could provide a key element of certainty in the uncertain world facing households, businesses and governments. Robert Breunig[13] and Tony Makin[14] suggested that with prices stable or possibly falling, a freeze in the minimum wage might cost workers little or nothing in terms of purchasing power. Guay Lim[15] and several others said if the government wanted the economic stimulus that would come from an increase in the minimum wage, it had other ways of bringing it about without making conditions more difficult for employers. …and bad times for workers Those supporting an increase saw it as a way to bolster consumer confidence and redress unusually weak worker bargaining power. Wage growth before the coronavirus hit was historically low at close to 2%[16], an outcome so weak for so long that in 2018[17] and 2019[18] the Commission awarded much bigger increases in the minimum wage, arguing employers could afford them. James Morley[19] was concerned that a freeze in the minimum wage would “mostly just lock in” inflation expectations that were already too low. Peter Abelson[20] said labour productivity rose with respect for workers and fell with disrespect. A wage freeze would disrespect workers. Saul Eslake[21] proposed a middle way, deferring a decision rather than granting no increase. He said the increase that was eventually granted should do no more than keep pace with inflation. Read more: Why the coronavirus shouldn't stand in the way of the next wage increase[22] The economists were asked to rate their confidence in their responses on a scale of 1 to 10. Unweighted for confidence, 45.3% of those surveyed opposed a wage freeze. When weighted for (relatively weak) confidence, opposition fell to 43.5%. 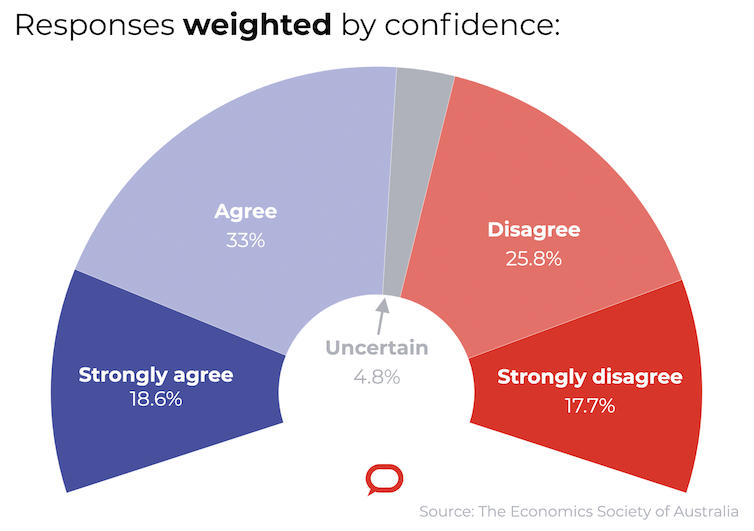 The Conversation, CC BY-ND[23] Unweighted for confidence, half of those surveyed supported the proposition that a freeze in the minimum wage would assist Australia’s economic recovery. Weighted for confidence, support grew to 51.6% The Fair Work Commission is required to complete its review by the end of this month[24]. Individual responses