With commercial airline fleets grounded due to lack of demand, the Australian government will pay the nation’s two biggest airlines, Qantas and Virgin Australia, $A165 million to ensure they keep flying critical metropolitan and regional routes over the next two months.

This measure comes on top of a A$198 million assistance package[1] for regional airlines and the waiver of A$715 million in fees and charges for domestic airlines.

It’s particularly important for the cash-strapped Virgin Australia. The company this week asked the Australian Stock Exchange to suspend trading of its shares[3] after the federal government rebuffed its request for a $A1.4 billion loan.

Without a significant cash injection, industry experts[4] say, the airline will collapse within six months. Prior to the government’s latest announcement there were reports it could go into administration[5] within weeks.

Virgin Australia is 90% owned by five international companies – Etihad Airways, Singapore Airlines, China’s Nanshan Group and HNA, and Richard Branson’s Virgin Group. Facing their own difficulties, they have signalled they will not inject further capital.

This funding package gives the airline more time to find other investors[6]. But its longer-term future remains up in the air.

While the US government has agreed to provide US$50 billion[7] in loans and grants to its ten biggest domestic airlines, with the option to take equity stakes, Treasurer Josh Frydenberg said this week the Australian government was “not in the business of owning an airline”.

Having two major airlines had served Australia well, he said[8], but “our approach has been sector-wide support”.

Complicating that type of support has been disagreement between Virgin Australia and Qantas.

Qantas chief Alan Joyce has argued for “survival of the fittest[9]” and against assistance to “badly managed” businesses. His airline did not need government support, Joyce said this week. But if the government loaned Virgin Australia A$1.4 billion, he wanted A$4.2 billion[10].

To bail or not to bail

The federal government’s dilemma is whether it is better to bail out Virgin Australia or allow commercial forces to rule, as it has done in the past.

Its interest in sector-wide support reflects the fact the entire domestic aviation industry is hurting.

Freight and logistics, aircraft maintenance and repair, flight training and simulation, component manufacturing and research and design operations are all bundled together into a tightly bound sector.

All up, the industry’s five subsectors – domestic commercial aviation, international commercial aviation, general aviation, freight transport and aviation support infrastructure – have provided employment for about 90,000 Australians across 1,900 businesses[11]. So it’s not just the 10,000 people employed by Virgin Australia the government needs to think about.

Systems shocks are nothing new

History is also a factor. The global aviation industry is no stranger to “system shocks”. These have included the Global Financial Crisis of 2008, the SARS outbreak in 2003, the World Trade Centre attacks in 2001, the Asian Financial Crisis in 1997 and the oil shocks of the 1970s.

Typically the sector has “bounced back” within a year.

The last big shakeup of the Australian airline industry was in 2001. Just days after the September 11 terrorist attacks, Ansett Airlines – flying since 1935 – went into administration. 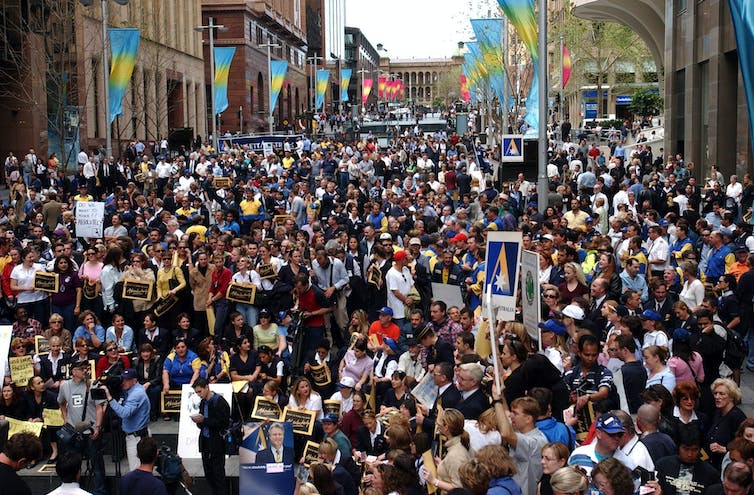 Ansett supporters rally in Sydney on September 14 2001, calling on the federal government to bail out the airline. Dean Lewins/AAP

So from the rubble of failure new enterprises and forms of aviation business can grow, just as Virgin Australia has taken Ansett’s place as the nation’s second major domestic carrier.

Of course, the extent of the crisis is somewhat different this time.

With domestic travel restrictions likely in place for at least six months, and international flight restrictions set to continue even longer, the sector will be changed forever.

Read more: Once the pandemic is over, we will return to a very different airline industry[12]

But history shows Australia can support two major airlines. We have extensive domestic aviation routes that will enable an early recovery compared with airlines in other parts of the world that rely on international routes.