Discussions about Australia’s retirement income system typically begin by reciting the political slogan that there are “three pillars” to the system — the age pension, compulsory super, and voluntary savings.

Missing is discussion of what makes something a “retirement pillar”. 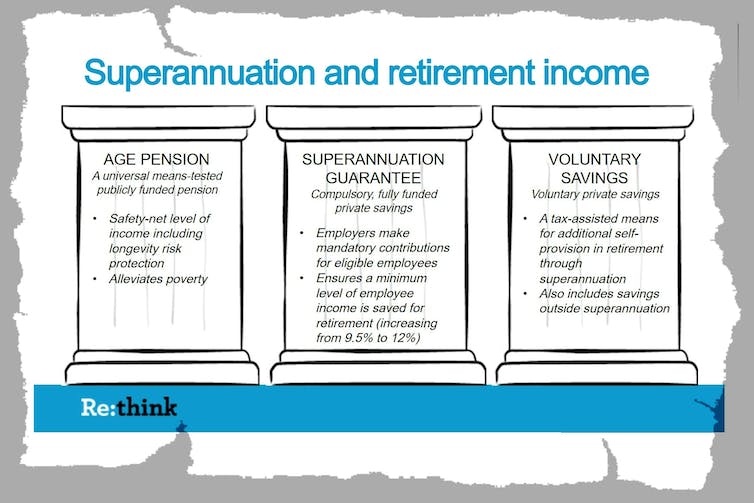 Treasury tax white paper slideshow, 2015[3] It’s possible to think of other retirement pillars. Moving to India for a cheap lifestyle would be one. Requiring retailers to provide the elderly free goods and services[4], with the cost absorbed in the prices paid by others could be another. To be a pillar, something would have to allocate goods and services in retirement to people who are no longer earning wages. In my recently released report[5] I argue that superannuation fails this test. Super isn’t a retirement pillar Among other things, super can be spent many years before retirement, beginning anywhere from age 55 to 60[6], even though the retirement age specified the pension legislation is 66 to 67[7]. Many financial planners advise intending retirees to spend a lot of their super quickly in order to shelter it in income-test-exempt assets such as housing[8] and qualify for the pension. The super system also can’t guarantee retirement incomes for people who are self-employed, casually employed, homemakers, have chosen their super fund unwisely or lost the proceeds in things such as online romance scams. Read more: The uncomfortable truth about super: there's no ‘one-size-fits-all’ contribution[9] As a system, super comes with unnecessary financial risks, such as suddenly losing 21% of its funds, as happened between September 2007 and March 2009 during the global financial crisis. It is better thought of as a growth-sapping, resource-wasting, tax-advantaged asset purchase scheme aimed at the already wealthy, which is unlikely to do much[10] to reduce reliance on the age pension. We would be better off abandoning it and letting workers spend or save their money as they see fit. The super system is inefficient The superannuation system employs 55,000 people[11] at a cost of A$32 billion[12] per year to produce $40 billion[13] per year in retirement incomes. This is nearly as many people as the enlisted Australian Defence Force (58,000) with a similar total cost ($34 billion). The rest of Australia’s entire welfare system, including administering the age pension, disability, unemployment benefits and Medicare, costs just $6 billion per year and employs 33,000 people[14], while providing $45 billion[15] in pension benefits. It directs money where it isn’t needed.. Each year the superannuation system takes in $117 billion[16] and spits out $80 billion[17] in payments (including lump sum withdrawals), leaving $38 billion in asset markets, sapping spending and economic growth. That’s roughly as much as the $40 billion[18] stimulus package introduced during the 2009 financial crisis. Unlike it, the super system depresses rather than stimulates the economy. Unlike the super system, the age pension system is likely to stimulate the economy because it takes purchasing power away from high-income taxpayers with a relatively low likelihood of spending extra dollars to to lower-income pensioners with a high likelihood of spending them. …and away from those who do need it Unlike the age pension system, the super system can’t provide poverty relief, or broadly adequate retirement incomes. For the bottom 40% of earners it does the opposite of smoothing income, making them poorer than they would have been while working, and somewhat richer[19] than they would have been while on the pension and retired. The $18 billion[20] of tax breaks on super fund contributions and $20 billion[21] of tax breaks on super fund earnings are predominately directed to high income earners[22]. In a comprehensive study released this week the Grattan Institute has demolished the claim that super contributions come out of employers pockets. Instead it finds that, on average, 80%[23] of each super contribution comes out of what would have been wages. Here’s how to escape it Scrapping the system altogether would massively improve Australia’s economic performance, including the performance of our only true retirement income system, which is the age pension. It can be done by forcing employers to pay what are now super contributions directly into wage accounts and allowing super fund holders to withdraw up to a maximum amount each year during a transition period, after which all super balances would receive no special tax treatment. Read more: 5 questions about superannuation the government's new inquiry will need to ask[24] The tens of billions saved in the budget could be used to enhance the size and scope of the age pension. It could incorporate appropriate rent assistance[25] and begin at age 60 instead of 67. It’s possible. Certainly, there would be job losses, but in other industries we have come to accept that there is no point in continuing to pay people to do things that aren’t needed, and especially no point in making those payments compulsory. It’d be one of the best things we could do to enhance the working of our economy.