The board of Australia’s second-biggest bank is in for some stick at its annual general meeting today, as Westpac shareholders vent their displeasure at the scandal involving breaches of anti-money-laundering rules.

But though it will be uncomfortable, with enough shareholders likely to vote against the remuneration report to trigger a vote to spill the entire board, a full-blown revolution is not on the cards.

The Australian Shareholders’ Association, with proxies for more than 2,000 shareholders[2], will not support a spill. Nor will major institutional shareholders[3] such as industry superannuation funds HostPlus and Unisuper.

With the number of shares held determining how many votes each shareholder gets, major investor support is enough to suppress most shareholder uprisings.

This, and a fundamental problem facing all collectives, currently limits the potential of shareholders to hold corporations to account, both through choosing to hold shares or not, as well as through voting power.

Since the the 1980s secular funds have extended this idea to the more expansive agenda of social and environmental sustainability. One thread of this ethical investment trend has led to the divestment movement.

A notable example is the campaign targeting universities[4], banks[5] and other big institutional investors[6] to dump their stocks in fossil fuel companies. 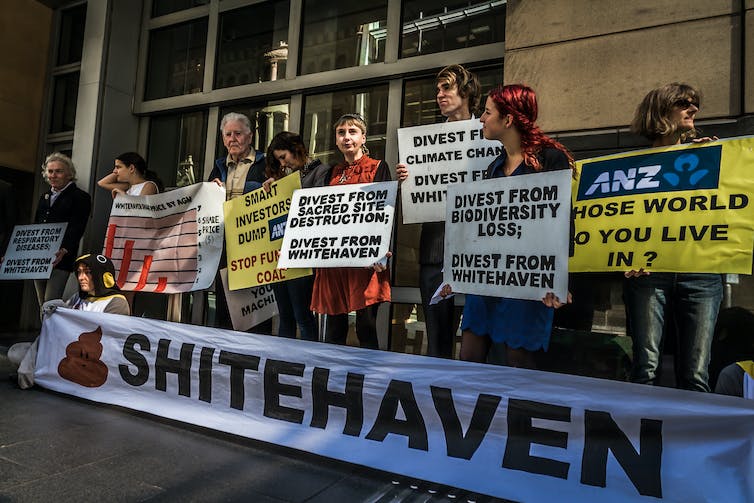 The movement’s rationale is that divestment increases the cost of capital. It’s effectiveness, however, is a matter of debate. Bill Gates is among the critics, calling divestment “a false solution[7]”. One argument is that it simply means companies end up being owned by shareholders only interested in profits. It has also been argued fossil fuel divestment might even cause emissions to rise[8].

Shareholder activism takes a different approach to divestment. It’s about immersion rather than aversion. It involves shareholders directly engaging with directors and executives of companies to effect change from within.

Unlike ethical investment, the roots of shareholder activism are not altruistic. Historically to be called an activist shareholder was no compliment. It probably meant you were a hedge fund focused solely on reaping bigger profits. This was typically done by pressuring boards and management to sell off under-performing assets and disburse the cash to shareholders.

Read more: How companies should fend off attacks from activist investors[9]

To date, little activism has been motivated by altruistic purposes[10]. That’s partly to do with a fundamental problem that limits the ability of activism to influence corporate behaviour for non-financial reasons.

Economists call it the free-rider problem. In essence it’s the problem[11] of individuals having little incentive to contribute to a collective resource when they can enjoy its benefits even if they don’t.

How this applies to shareholders was first outlined by Harvard academics Adolf Berle and Gardiner Means in their seminal 1932 book The Modern Corporation and Private Property.

Ownership of public corporations is generally diffused between a significant number of shareholders. Individual shareholders have little incentive to monitor senior management, because of the cost they bear while others reap benefits.

Read more: Giving workers a voice in the boardroom is a compelling corporate governance reform[12]

Ironically, corporate boards are meant to mitigate this free-rider problem. Their job is monitor management on behalf of shareholders. But Westpac’s anti-money-laundering scandal adds to the evidence the system might be broken. The allegations suggest a board incapable or unwilling to effectively monitor senior management in complex and sprawling conglomerates.

Shareholder engagement and activism should play an increasingly important role in shaping corporate behaviour, improving the quality of board monitoring and addressing the free-rider problem.

Big institutional shareholders in particular could be more active in ensuring boards have skilled, competent directors. They could also foster a culture of openness by supporting directors to challenge senior management without fear of putting their tenure at risk.