There weren’t any new tax ideas in the 2019 Budget[1], which perhaps is to be expected from a six year old government preparing for an election the betting markets suggest it will lose.

Instead what we got were extensions of a few actually-pretty-big tax ideas introduced in last year’s budget: the planned elimination of the 37% tax bracket, the Low and Middle Income Tax Offset, and the immediate expensing of investments for businesses.

Given the looming election it’s worth examining each of these three ideas, which I will do over the next few days.

First, eliminating one of the tax rates. At the moment the income tax schedule has five rates:

Commonwealth budget papers[4] It’s an idea with a long lineage. In 2010 the Henry Tax Review told the Rudd Labor government that personal income tax had become “inordinately complex[5]”. It proposed a simpler, three-rate, system, but, importantly, said most of the complexity wasn’t due to the number of rates but was due instead to the “large suite of complex deduction rules, numerous tax offsets and a variety of exempt forms of income”. 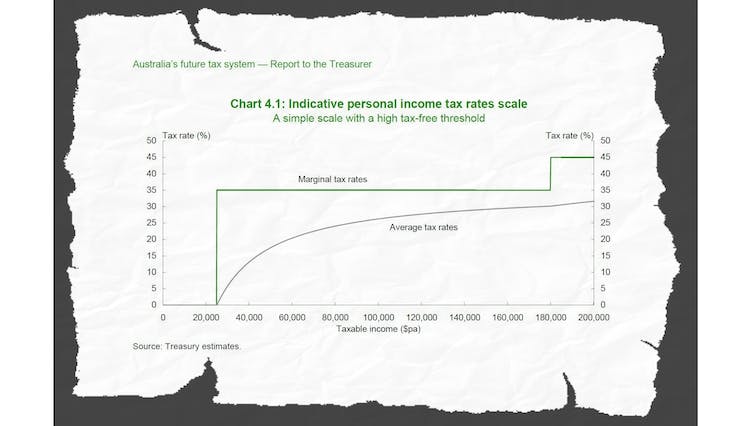 Henry Tax Review[6] It’s worthwhile considering why simplicity matters. Setting aside political considerations, simplicity only matters to the extent that it lowers the cost to the economy of the government raising revenue. For every dollar it raises, the tax system imposes compliance costs on taxpayers and others like employers and banks who are required to keep records and report information to the Tax Office, which also bears costs. The only simplicity we should care about is one that makes the tax system easier to comply with and easier to administer. The kind of simplicity that matters The problem with removing a tax bracket is that by itself it does nothing to achieve that objective. It makes the tax system look tidier - the graph is easier to draw, but that’s it. It doesn’t simplify lives and doesn’t bring joy, except to clean freaks who can satisfy their inner Kondo. The thing to understand is that the tax system is sometimes complicated for a good reason. That might be a desire to tightly target a tax measure so that only those of a certain income or those with children receive it, for example. Not targeting the tax measure would make the system simpler, but it might also make it less fair and more expensive. If we accept that some income redistribution is desirable, then in an ideal world we would have a smoothly increasing marginal tax rate from middle to high incomes. There would be an infinite number of tax brackets, as in Germany[7], where income tax rates rise continuously with income. It would be easy enough to navigate. An online tool would do the trick.

If we must have discrete tax brackets, then the goal ought to be to approximate this ideal system as closely as possible. It would mean having more rather than fewer rates. Having fewer rates forces some people to pay more than they should and others less. Some have suggested that eliminating tax brackets would reduce the opportunity for taxpayers to manipulate their income so that it bunches around thresholds. A graph prepared for the Abbott government’s tax white paper shows that bunching does indeed happen, but it is confined to only a narrow sliver of the income distribution and thus very few taxpayers. It’s probably not worth worrying about. 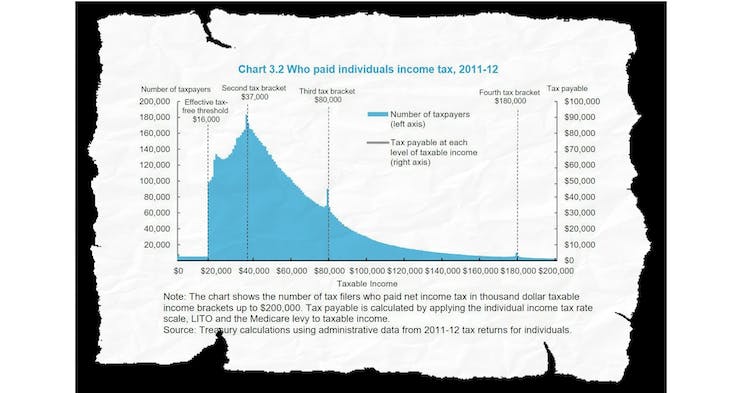 Re:think. 2015 Treasury tax discussion paper[8] The kind of simplicity that would help An idea recently endorsed by the Inspector-General of Taxation[9] and originally proposed by the Henry Review[10] is a standard deduction. It would entitle every taxpayer to claim a standard amount of deductions without needing receipts. Those with deductions in excess of the standard deduction would still be free to claim those. It’s a system that already exists in the United States[11] and other countries. Deductions aren’t necessarily a bad thing. There are good reasons why some should be allowed (for example, deductions on the debt interest used to fund investment). But in practice they take up a lot of our time to document and can be difficult for the Tax Office to interpret (is that car really for work purposes or for personal driving?), something the Tax Commissioner has complained about.[12] My own research[13] suggests deductions are one of the main means of tax avoidance, responsible for 12 times as much avoidance as understatement of income. The former Labor government was on board with Henry’s proposal. Unveiling the findings of Ken Henry’s review in 2010, treasurer Wayne Swan promised to “remove the hassle of shoeboxes full of receipts[14]”. From 2012 onwards everyone would get a standard deduction of $500 in lieu of claiming work-related expenses. It would climb to $1000 from 2013. Read more: What will the Coalition be remembered for on tax? Tinkering, blunders and lost opportunities[15] Budgetary constraints meant he never got around to introducing the legislation. In 2017 Treasurer Scott Morrison asked a parliamentary inquiry to look into the possibility of doing it. It found it would be expensive[16]. A standard deduction of $500 would cost an extra $2.3 billion, a standard deduction of $1000, $4.6 billion. These costs, while considerable, are nothing like the cost of the flatter tax system the Coalition is proposing. And they would enable most taxpayers to avoid submitting a tax return at all. Deductions are the primary reason for tax adjustments. Without them, taxpayers could set and forget. Most taxpayers, and the Tax Office, could concern themselves with other things, such as going after multinational corporations. Now wouldn’t that spark joy?