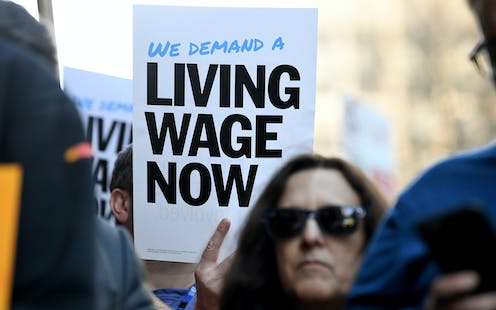 Labor is promising a “living wage” rather than a “minimum wage” if elected.

It will ask the Fair Work Commission to first determine what wage would offer a “decent standard of living for families[1]”, and then to determine the time frame over which it should be phased in, taking into account the capacity of businesses to pay, and the potential impact on employment, inflation and the broader economy.

It is selling the idea of what would be a very big increase on the present minimum wage as “good for workers and good for the economy”.

“Consumer spending makes up 60% of the Australian economy,” its employment spokesperson Brendan O'Connor said. “When low-paid workers get a pay rise, they spend it in the local shops and help small businesses. It’s good for everyone.”

The idea harks back to the 1907 Harvester judgement[2], in which an arbitration court judge decreed that wages at a Melbourne factory should be based on the cost of living “for a worker and his family”.

To get there from the current bare minimum wage of A$18.93 per hour would almost certainly require increases bigger than the sum of productivity growth and inflation, which are running at a combined annual rate of around 3%.

Unacknowledged by Labor in spruiking the policy this week was the fallacy of its consumer spending argument, the cost of the proposal to jobs, and the likelihood that it won’t much help many of the people who need it.

One of the claimed benefits of a living wage is that employees will spend most of their extra income, resulting in large increases in national spending, national income, and even the tax take.

An implicit assumption is that the extra money comes “as manna from heaven” with no second-round effects.

But given that other labour costs won’t come down (it is hard to see executive pay being cut), the labour cost for each affected business will climb, pushing down returns to the providers of capital, including the returns to shareholders and small business owners.

With lower returns, less capital will be put up to invest.

Where businesses can, they will pass on the increased costs not matched by increased productivity by increasing prices.

They will get away with it unless they face competition from imports or other exporters.

Read more: 'Once upon a time, when Australia had a steel industry …'[4]

In the short term, the increases in prices of goods and services will cut the purchasing power of the wage increase. In the longer term, it might create a vicious cycle of wage and price hikes, with adverse economic consequences.

The bad news on jobs

It is well established that wage increases above the rate of productivity growth plus inflation lead to less employment than there would otherwise be, in both the number of employees and the hours worked per employee.

Labour costs are a major expense for most businesses.

In response to higher labour costs, many employers will choose less labour-intensive ways of making their products. The large and rapid wage increases in the mid-1970s and early 1980s resulted in sharp reductions in employment. In contrast, the recent low rates of labour cost increases have helped drive significant increases in employment and a fall in unemployment.

With the Australian economy facing a likely slowdown over the next year or two, a large increase in wages might be particularly poorly timed.

The false hope for those most in need

Universal education and health care, and the redistribution of income via social security payments funded by a progressive income tax, are the most direct and effective ways to fight household poverty.

The world today is very different to the world of the Harvester case in 1907. Then, most workers were in full-time employment and needed a living wage to support a family. Now, about a third are employed part-time. Redistribution via the tax and payments system is how we support families who need it.

A higher minimum or “living wage” would provide minimal assistance to some on low incomes, and would lift the incomes of many others not generally considered in need of support.

Many of those below the poverty line who are only employed part-time or not at all would not be lifted out of poverty. A higher living wage would provide more to those already in full-time jobs than it would to part-time workers.

And it would provide more to low-wage employees who are members of high-income families, who probably shouldn’t be our first concern.

We can do more more directly to alleviate poverty by reforming the income tax and social security systems. They are specifically designed to redistribute income according to need.