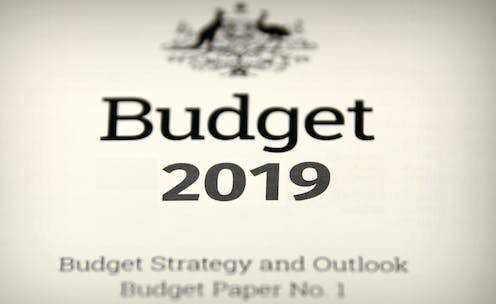 The April 2 budget will provide about A$600 million to pursue wrongdoers and help restore trust in Australia’s financial system.

The budget, which will be a launching pad for the election, likely to be announced the following weekend, is set to include another round of tax cuts but it will also contain strong warnings about a deterioration in Australia’s economic outlook.

“The near term economic outlook is looking softer since [the December budget update], with the economy facing some emerging risks,” Treasurer Josh Frydenberg said in an interview with The Conversation.

The international outlook had been deteriorating, with growth figures revised down, he said.

Frydenberg said the budget’s measures were “focussed on driving down the cost of living , driving productivity and growth and creating more jobs”. It will forecast a long-awaited return to surplus and its spending will be “very targeted”.

Following the Hayne royal commission’s indictment of the banks and other financial institutions, the government will give the Australian Securities and Investments Commission (ASIC) more than $400 million in additional funding over four years to 2022-23. On average, this is a rise of about a quarter in its annual funding over the forward estimates compared to 2017-18.

The Australian Prudential Regulation Authority (APRA) will receive $150 million extra – an increase of about 30% in its annual funding over the budget period, compared with 2017-18.

Taxpayers, however, will eventually get back the funds provided to ASIC and APRA – the financial industry will be levied for the cost, with the largest institutions paying the most.

Also, the government will provide more than $35 million to support the expansion of the federal court’s jurisdiction to include corporate crime. The expansion will include the appointment of two new judges, the engagement of 11 registry and support staff, and the building of new facilities.

The court’s new role will mean institutions and individuals breaking the corporate law can be prosecuted faster than under the current system.

The government says the ASIC funding will support expanded regulation of financial services and “a new, more hardline, proactive and accelerated enforcement strategy including implementing a ‘why not litigate?’ approach”. There will be greater on-site supervision of larger institutions.

Read more: Grattan on Friday: Josh Frydenberg has a great job at the worst time[2]

The APRA funding will support, among other initiatives, its response to areas of concern highlighted by the commission, including governance, remuneration, and culture in financial institutions.

As the government beds down a budget crucial to its efforts to revive its electoral fortunes, Frydenberg said it would help “frame” the election contest.

“It will be about what kind of nation Australians want over the next decade. On our side it’s about balancing the books, growing the economy with more jobs and lower taxes, guaranteeing essential services, hospitals, roads and schools, all without increasing taxes,” he said

“There’s been a bit of a debate over real wages and the key to real wages is not high taxes - it’s through decreasing taxes and targeted spending on infrastructure and more trade and getting people into work,” Frydenberg said.

He said the Australian economy’s fundamentals were sound. Growth, at 2.3% per cent through the year, was second only to the United States among G7 countries. This week’s figures showed unemployment falling to 4.9%, the lowest in eight years. Youth unemployment was the lowest in seven years.

But there was a slowdown in the global economy, with global trade volumes down more than 3% since August. Trade tensions continued and there was uncertainty over Brexit. The International Monetary Fund and the OECD had downgraded their 2019 growth numbers.

At home, "falls in dwelling investment detracted 0.2% from growth in the December quarter. The impacts of the drought have seen farm GDP down by 5.8 % through the year and the impacts of the flood have still yet to fully flow through.”

Frydenberg said the situation was “all manageable - but only with a strong economic plan that gives business confidence to invest and consumers the confidence to spend. It requires a pro-growth agenda, which is exactly what you’ll see in this year’s budget”.

The budget numbers are being held up by strong growth in nominal GDP, which determines revenue numbers.

Frydenberg said returning the budget to surplus was “more significant than just a number because it’s actually showing that we’ve turned a corner.”

“Surpluses will continue to grow over the medium term, and the goal is to bring net debt down to zero.”

Frydenberg stressed the government’s commitment was for a surplus in 2019-20, declining to rule in or out a surplus for the current financial year. He pointed out there had been “issues’ in this financial year, especially the drought and other natural disasters, but also higher schools payments and various other commitments the government had made.