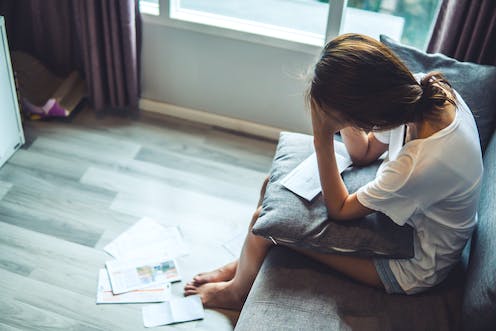 Two thirds of Australian adults feel financially insecure[1]. Almost one in two have less than three months’ income saved, and almost one in three have less than one month’s income. One in seven have negligible or no savings, meaning that financial hardship[2] – being unable to pay debts when they fall due – is just a bill away.

This is something that rightly concerns policy makers. Yet for all the attention given to the problem – for example, in the recently completed Senate inquiry into financial services[3] targeted at Australians at risk of financial hardship – there is little empirical research on the topic in Australia to help inform policy responses.

Read more: Should regulation be aimed at saving the payday borrower from themselves?[4]

To address this gap, we conducted Australia’s first large-scale study on the experiences of people in financial hardship. We surveyed[5] 1,101 Australian adults who had been unable to pay a debt when it fell due within the previous two years.

The results must be interpreted carefully, as certain groups – such as people who spoke a language other than English at home, and people aged under 25 – were underrepresented.

Nonetheless, our findings clearly contradict a popular belief that debt problems are mostly due to poor choices. They also shed light on the profound impact that financial hardship – from temporary shortfalls in earnings to severe and ongoing deprivation – has on health, relationships and overall quality of life.

We asked respondents about their experiences in the year before they fell behind with repayments. The most common experiences were unemployment and underemployment, as well as physical and mental health problems. Significantly less prevalent were factors such as gambling or alcohol and drug addiction. 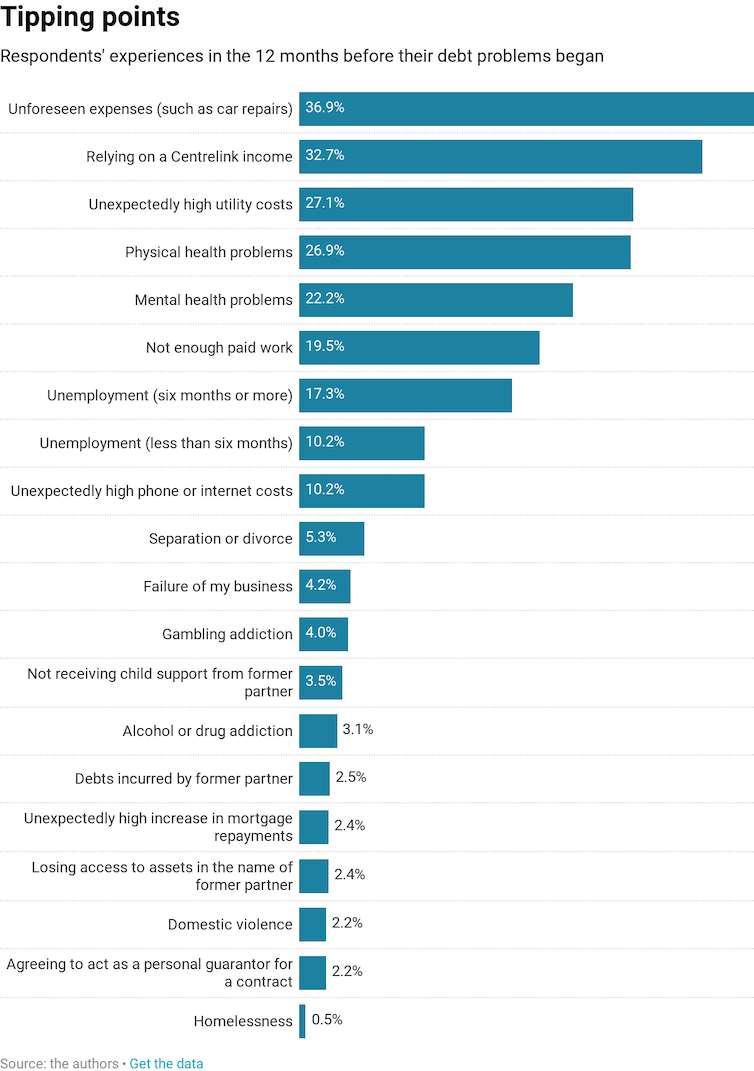 datawrapper, CC BY[6][7] These results suggest financial hardship can affect anyone, regardless of how personally disciplined they are. As one respondent told us: “I’m not badly off ($70,000 a year), but I’ve developed two autoimmune conditions on top of a preexisting neurological condition. Medication is expensive, and so are consultations with specialists […] I know how to manage my money, but there are more costs than money coming in […] It’s taught me not to judge people with money problems.” Less income, more hardship Falling behind with repayments was a stressful and isolating experience for our respondents, no matter their level of income. But Centrelink recipients are far more vulnerable, as their incomes leave no margin for unexpected expenses. “The reason we got in trouble was because the car broke down,” explained one respondent living on a Disability Support Pension. “It was just before Christmas, and all the bills came in together.” 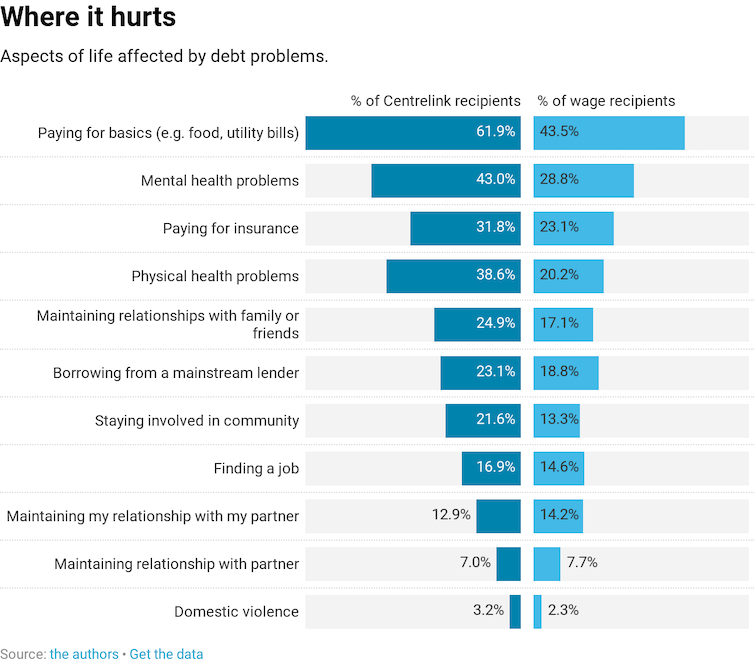 datawrapper, CC BY[8][9] Respondents told us that being in debt negatively affected their health, relationships, community involvement, and ability to look for work or finish their education. “It’s the anxiety,” said one respondent. “Not knowing from week to week whether the debts will all be able to be paid.” Coping by cutting down Most of our respondents sought to cope with their situation by reducing spending on food, recreation, utilities, medical care and transport. Just over a third borrowed money from family or friends. 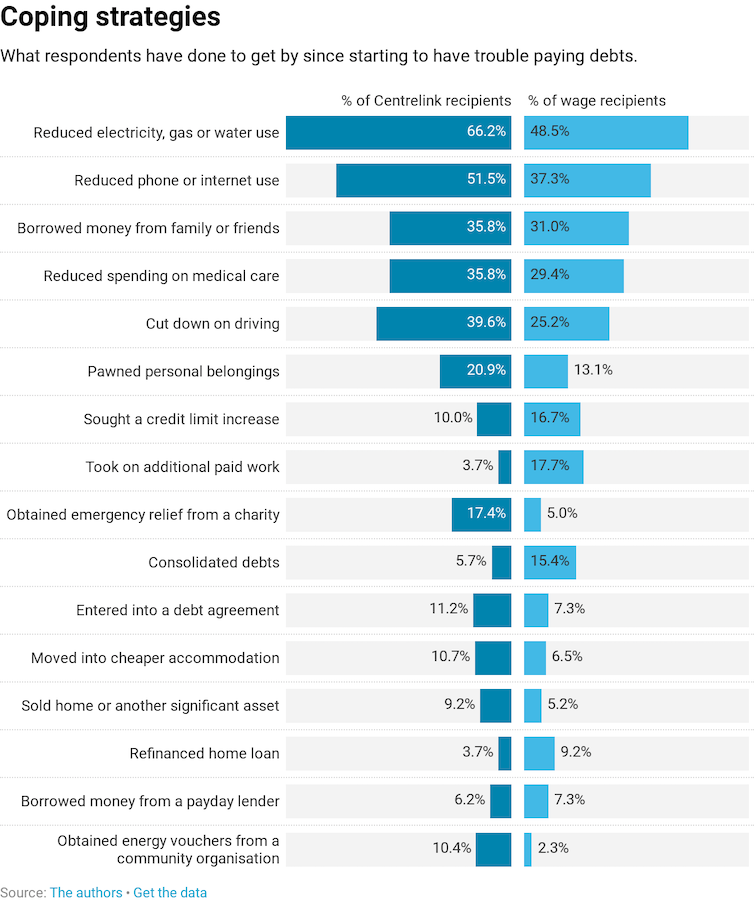 Many wage recipients mentioned cutting down on “extravagances” such as restaurants, alcohol and take-away foods. However, higher proportions of Centrelink recipients were forced to cut down on essentials such as food, heating and medical care. “I do not have any money for food,” said one respondent living on the Newstart Allowance. “I never thought we would be in this situation.” Assistance for low-income debtors Consumer protection laws allow Australians in financial hardship to negotiate moratoriums, payment plans and other arrangements (sometimes known as “hardship variations[10]”) with creditors including banks, energy, water and telecommunications companies. But just a quarter of our respondents used these provisions to obtain a hardship arrangement from an energy or water company, and only 14.3% used them to obtain assistance from a bank or other credit provider. Read more: Debt agreements and how to avoid unnecessary debt traps[11] It is also questionable whether low-income debtors benefit from such arrangements, which tend to be very short-term. Our results indicate a need to broaden the accessibility of assistance for low-income debtors – for example, by increasing funding for free financial counselling[12] services. Another measure, recommended by the Australian Council of Social Service[13] and[14] others[15], is increasing the amount of Newstart and other Centrelink allowances. Financial hardship can affect almost anyone. However, severe and ongoing debt problems are an inevitability for Australians whose incomes are simply too low to meet the cost of living.