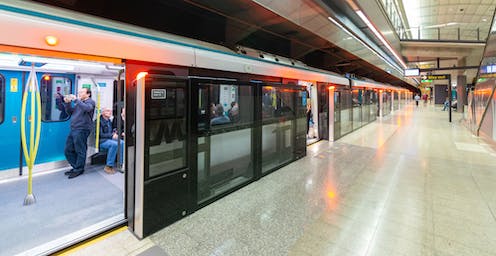 The NSW government’s industrial dispute with rail unions over the new intercity trains is tipped to add hundreds of millions of dollars[1] to costs on Australia’s largest infrastructure project that has already blown out by billions.

But even without overruns pushing the cost of the driverless-train project to more than A$55 billion[2], the economics of the “Sydney Metro” project are questionable – in particular the decision to cannibalise parts of the existing Sydney train network to create one of the four planned automated routes.

The new driverless trains – as used in megacities throughout the world – have fewer seats, increased standing room, and more doors than Sydney’s main fleet of double-decker trains, making them better suited to peak-time congestion.

The Metro project promises to deliver up to 15 services an hour (every four minutes) to cope with Sydney’s growing population.

Driverless trains will eventually operate on three lines from the CBD (to the northwest, west and southwest) and one in far-western Sydney, connecting to the city’s second airport site at Badgery’s Creek.

By far the biggest cost for the project are new tunnels under the harbour and CBD. Our focus, however, is on the merits of cannibalising existing rail infrastructure – namely the rail line to Bankstown, about 16km southwest of the Sydney CBD – for the southwest Metro line.

This part of the project involves converting 11 stations between Bankstown and the inner-eastern suburb of Sydenham. (A new tunnel has been built from Sydenham into the CBD, where the line links to the Northwest Metro line).

Our analysis shows the costs, disruptions and lost opportunities associated with converting this line for the Metro network outweigh the benefits and potential savings, largely achieved from replacing drivers.

Automated trains are now commonplace in cities throughout Asia, Europe and the Middle East. Their high-frequency services and platform screen doors enable the transport of large numbers of commuters with minimal staff supervision. They have proven safe and effective.

Read more: Five innovations that could shape the future of rail travel[4]

The issue is whether they are worth cannibalising existing services for. There are two main calculations to consider: the initial cost; and the ongoing costs.

Straightening up: the curved platform of Campsie train station, on the Bankstown line in south-western Sydney, is being converted for automatic trains as part the NSW government’s Sydney Metro rail project. Wikimedia Commons, CC BY[5][6]

Calculating the full cost of making these right for driverless trains is complicated, because maintenance and renovations to improve accessibility and amenity would have happened in any circumstance.

Based on the NSW government’s public announcements[7], we estimate converting the line and stations to driverless trains will cost about A$1 billion. We conservatively estimate $500 million of that is purely to meet the operating requirements of driverless trains. This excludes the cost of new train storage, control systems and power upgrades specifically incurred by the choice of automated trains.

On the other side of the ledger are potential savings – notably on driver costs. We estimate operating the Bankstown railway as an automated metro will save about $15 million a year on driver costs.

This is based on the driver cost of providing train services at least every 10 minutes all week, and every five minutes during peak times. The NSW government has indicated Metro services will operate up to every four minutes[8], but the timetable for the Bankstown line metro is not yet public.

This would require employing about 100 drivers, allowing for normal working hours, holidays and other leave. Based on the cost of employing a driver, including administrative overheads, being about $150,000[10] a year, the savings from replacing drivers on this line is about $15 million a year.

Time for a rethink

Augmenting established rail networks with new automated rail services is one thing. Cannibalising existing infrastructure to build those new lines is quite another.

Fortunately for taxpayers, the NSW government is not repeating this conversion approach with the other Metro lines.

By our calculation, Sydney would be better served by following the approach adopted in Melbourne and Brisbane. Both cities are investing heavily in new rail lines, but they are acquiring new trains compatible with their existing railway systems.

This would make much more sense for the Metro line yet to be built between the CBD and the western-Sydney centre of Parramatta.

Greater compatibility will enable services to be readily extended onto existing tracks west of Parramatta while avoiding the cost and complexities of the Bankstown line conversion.