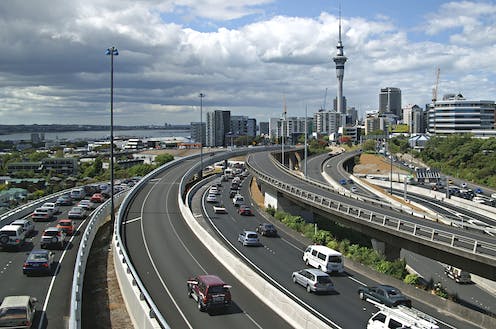 It would be hard to find someone who’s visited Copenhagen or Amsterdam and complained about too many bikes. And you don’t tend to hear a lot of moaning about too much public transport in Singapore or Hong Kong.

Talk to someone after a trip to Los Angeles, Moscow, Rome or Mumbai, however, and you will almost certainly get an earful about the horrendous traffic.

The vast differences in such experience lie in how local and national governments invest their transportation funds. It always comes down to money, and the perennial question of how to spend limited resources while maximising the benefits and the returns on investment.

As this year’s budget approaches, and with the government’s first Emissions Reduction Plan (ERP[1]) just released, these questions are coming into sharper focus. And the biggest, perhaps, is how to reduce New Zealanders’ dependence on cars.

The ERP contains NZ$350 million for measures to improve low-impact transport modes such as walking, cycling and public transport, including provision for at least 100km of urban cycleways.

At the same time, it offers even more subsidies for electric vehicles. With only 0.7% of New Zealand’s vehicle fleet being pure electric cars, the plan would likely have a bigger impact if it subsidised e-bikes[2] and public transport.

The figures for cycling are particularly startling. New Zealand has over 96,000km of roads[3] but just 111km of separated cycleways[4] that protect cyclists from vehicles. That amounts to just 0.1% of roads with safe places for cyclists.

Compare this to the €70 million[6] (just over NZ$116 million) Denmark has committed to building separated cycling roads.

By 2045, Denmark also plans to have spent €295 million building 45 cycle “superhighway” routes connecting the entire country. It’s expected this will result[7] in one million fewer car trips and 40,000 fewer sick days each year.

For reference, New Zealand spent the equivalent of more than €750 million[8] on the Transmission Gully motorway into Wellington. It’s clear we could significantly increase spending and make cycling attractive and feasible for many more people.

Around 30% of urban car trips are under two kilometres in length[9] and could easily be replaced by walking. But the lack of footpaths, or their poor condition, can deter many people.

The transport budget should recognise the importance of enabling healthy and zero-carbon modes of transport by prioritising funding for better footpaths and safer streets.

Such a budget would allocate more funding to widening footpaths, repairing the existing footpath inventory, slowing vehicles, reducing the number of cars in cities and creating more on-street amenities.

Walking and cycling also have many co-benefits, including better physical health[10], which would have obvious beneficial effects on healthcare budgets.

Much of the overall transport budget each year goes into long-term programmes with various aims. Of these, the National Land Transport Programme (NLTP[12]) is arguably the hardest done by.

Its purpose is to allocate funds to provide “a safe, accessible land transport system for Aotearoa now and in the future”. It’s tasked with delivering public transport services, implementing the wide-ranging Road to Zero[13] programme (aimed at reducing the road death toll), and maintaining roads – yet consumes just under 1.6% of the annual transport budget.

Ideally, such an important programme would attract a much larger budget share.

Read more: To get New Zealanders out of their cars we'll need to start charging the true cost of driving[14]

But funding programmes that reduce the total number of car trips – such as more extensive cycleways and better public transport options – would reduce that need to police roads.

Better roads for all

The apparent success of the recent half-price fare scheme[16] for public transport has shown how making it more affordable encourages more trips. The budget should allocate funding to make these cuts permanent and increase the number of fare concessions.

Greater use of public transport would also reduce the pressure to expand roads. This falls under the overall transport budget’s “capital investment package”, of which nearly $3 billion has already been spent this year – 40% of all transport dollars.

New Zealand can achieve more with its transport funding by just getting people out of their cars more often. In the same way that using trains, buses, bikes and feet is easier on personal finances, the national transport budget will benefit from less emphasis on the automobile.

But even if we don’t want to shift spending from one mode to many, there is another option – to spend more.

As a percentage of GDP, transportation spending has been declining ever since its peak in the 1950s[18]. We don’t have to treat the relationship between road, public transport and active travel (walking and cycling) as mutually exclusive. We can keep road funding at its current level and spend more on other modes.

That way, we could do the things we so admire in other counties and still satisfy those who demand a car. The better our cycling and public transport infrastructure, the less reliant we’ll be on cars, bringing us one step closer to breaking the vicious cycle of automobile dependence.