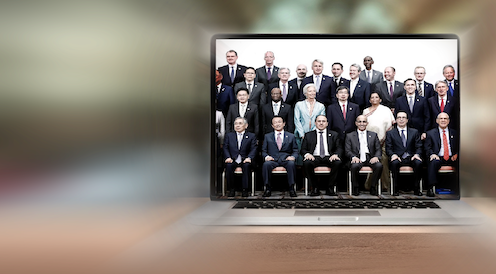 The Reserve Bank’s cash rate is in the news, and in an unwelcome way[1] for the first time in 11 years.

After a decade in which Australia’s central bank has only moved its cash rate in one direction (down[2]) while trying to ignite inflation, it is now poised to push its cash rate up in a bid to douse those flames.

Inflation has spiked and central banks have pushed up their versions of the cash rate in the United States, the United Kingdom, New Zealand, Canada and elsewhere. So there’s a very good chance we will too.

Apart from anything else, if we didn’t push up our rates when other countries were raising theirs, our currency would sink. So there’s mileage in running with the pack, even if we later discover the pack has been running in the wrong direction.

From the 1940s to the 1970s, central banks kept interest rates low, relying on heavy financial regulation[4] to limit borrowing, and on fixed or regulated exchange rates to control the value of their currencies.

Then came two wars in the Middle East, in 1973[6] and 1979[7], which drove dramatic increases in the price of oil, forcing inflation to spike and fashions to change.

From the early 1980s, monetarism[8] was the fad, so central bankers set targets for growth in their money supplies, and used very high interest rates in an attempt to hit those targets.

They found high interest rates an ineffective tool, partly because governments had just deregulated financial institutions and private banks kept creating money, regardless of how high the central banks pushed up interest rates.

But the interest rates helped bring on recessions[9] and mass unemployment.

These at least got inflation back down, even though the inflation genie temporarily escaped from its bottle again in the late 1980s, leading to further hikes in interest rates and another set of recessions[10].

By the early 1990s, it was clear targeting money supply wasn’t the answer, so the central banks shifted to targeting inflation itself[11].

“Why hadn’t they thought of that before?” you might ask.

All about the cash rate

In Australia, the Reserve Bank would adjust (or attempt to adjust) the so-called cash rate[12] to speed up or slow down the economy to try and keep inflation within a target band.

The cash rate is the average rate banks pay to lend to each other overnight.

Careful readers will have noted that it is the banks themselves, rather than solely the Reserve Bank, that determine the rate, although the Reserve Bank administers the system though which the trades are made.

By borrowing enough from or lending enough to the private banks, the Reserve Bank could almost always push the cash rate up or down to where it wanted it.

So successful was it in getting the cash rate where it wanted, and so successful did the banks know it could be, that after a while it didn’t need to trade in the market to do it.

It merely had to announce where the cash rate would be, eventually dropping words about “operating in the money market” and simply saying things like[14]

A “basis point[15]” is one hundredth of one per cent, meaning 25 basis points is 0.25 percentage points.

It mightn’t be because of the interest rate adjustments, and certainly isn’t only because of them. Other candidates include insecure employment, globalisation, growing inequality and cheap energy; but central bankers like to take the credit.

In 2004, Ben Bernanke, later to become Chair of the US Federal Reserve, spoke of a Great Moderation[21] and said that in his opinion it wasn’t just luck, but the skill[22] of modern central bankers that had brought it about. They had finally cracked it!

Inflation tamed, til it wasn’t

You have probably heard than the last time Australian interest rates were hiked during an election campaign was in 2007[23], when the cash rate was lifted to what now seems a dizzyingly high 6.75%.

What you might not have heard is that two years later it was half that level, because of the 2008 global financial crisis, which had been around the corner during the election when the rate was hiked.

Read more: What's in the CPI and what does it actually measure?[24]

It turned out the central bankers hadn’t cracked it. They had ignored an enormous build-up in private debt and increasingly risky financial behaviour[25].

The Reserve Bank’s cash rate target hit a record low of 0.1%[27] during the pandemic.

But the flood of money the Reserve Bank pushed out the door by buying government bonds[28] and lending to banks for next to nothing[29] pushed the actual overnight cash rate down even lower, beneath 0.1%, to close to zero.

Official rates in Europe and elsewhere had been negative before the pandemic.

In much of the rest of the world what Australians call the global financial crisis was called the “great recession[30]”, and central bankers threw everything they could at trying to restore inflation after it was over.

They failed, just as Australia’s central bank failed to restore inflation. When COVID struck, inflation had been below the bottom of the Reserve Bank target band for almost all of the previous half decade.

Read more: Don't look Up! has a lot to say about economics, much of it useful[31]

This wouldn’t have been a surprise to the iconic 20th-century economist John Maynard Keynes, who is said to have once compared trying to boost an ailing economy by cutting interest rates to “pushing on a string[32]”.

What it should tell us is that the relationship between the cash rate and inflation is more complex that the central bankers told us (and themselves) it was. Hiking interest rates far enough will almost certainly bring inflation down, but at a cost.

Rate hikes can be counterproductive

Small increases in interest rates can actually push prices up. Interest rates are a cost to businesses (and to landlords) and can be passed on in prices.

And while pushing up rates reduces the disposable income of those with mortgages to repay (putting downward pressure on spending and prices) it raises the spending power of people such as myself, with savings in term deposits, boosting our ability to spend and push up prices.

Higher interest rates are often thought to discourage business investment, but there is little evidence they do. Investments are driven more by expected sales than the cost of finance.

Read more: Of the 4 economic wildcards between now and voting day, the first is CPI[33]

What would bring inflation down would be a series of interest rate hikes so big it crashed property and share market prices, or so big it pushed people out of work and brought on a recession.

So the central bank pack ought to tread carefully. If inflation is driven by fossil fuel prices, supply chain disruptions, wars and (looking ahead) climate change, then showing restraint, and addressing the causes of these issues or waiting for them to pass might be a better response than pushing up rates, albeit not one in the central bank tool box.

If it genuinely is excessive spending that is pushing up prices, the best tool to address that is fiscal[34], through budget measures that withdraw spending from the economy or push up taxes.

The March budget did the opposite, handing out a $250 cost of living bonus[35].

And we ought not forget that central banks and regulators have another tool they can use, which is to tighten the amount of credit by limiting how much financial institutions can lend. Higher interest rates are one of the instruments in the band, but not the only one.

Bands sound better when they are made up of several players, playing several instruments. If you are performing solo, you need to be extremely good.