Had Foodora’s Australian operations not already gone into voluntary administration[1], the November 16 decision of the Fair Work Commission might well have finished the food-delivery company off.

The commission upheld[2] former courier Josh Klooger’s unfair dismissal complaint against Foodora. In doing so, it found Foodora had incorrectly classified him as an independent contractor, rather than an employee.

By treating workers as independent contractors, “gig economy” companies such as Foodora have avoided the cost of paying employee entitlements such as annual leave, sick leave and superannuation. The commission’s ruling made Foodora liable for paying such entitlements.

So does the ruling put other gig-economy companies on notice that they too will have to pay for employee entitlements? The short answer is no. It’s complicated because the decision reflects a range of reasons specific to Foodora’s operations. 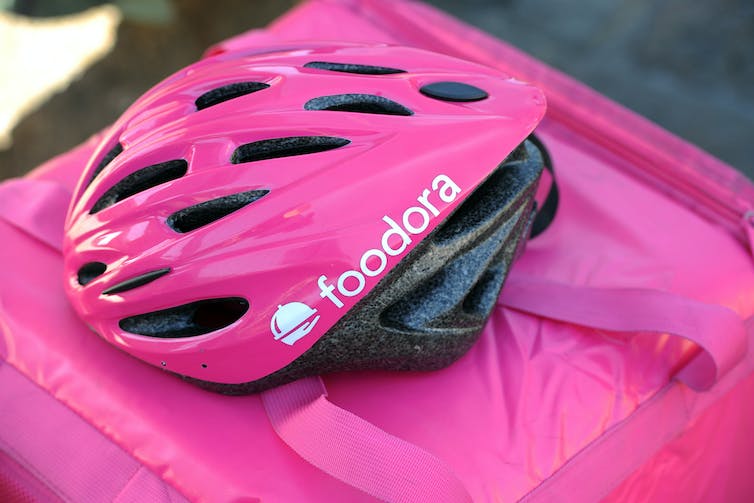 Foodora-branded uniforms and equipment indicated a level of control akin to that of an employer over an employee. Andrea Delbo/Shutterstock.com

But the Foodora case still might have some significant ramifications for the future of the gig economy – based on a not-yet-public ruling by the Australian Tax Office.

The Fair Work Commission’s decision about Klooger’s relationship with Foodora can be contrasted to its decision that Uber drivers are contractors not employees[3].

Labour law experts have pointed to[4] the exceptional circumstances of the Foodora case. These include the control the company exercised over Klooger. Foodora determined, for example, when he had to start and finish his shifts. It also required all couriers to wear a uniform and use Foodora-branded equipment.

Because these factors were specific to Foodora, there is no certainty the commission would rule that other gig-economy workers classified as independent contractors should be treated as employees.

Read more: Finance drives everything — including your insecurity at work[5]

As we have previously suggested[6], this may even result in other platforms creating greater arm’s-length relationships[7] with workers – both contractually and by reducing work-related support.

Taxation and the gig economy

Although the direct implications of the Fair Work decision for other platform companies are limited, Foodora’s demise is significant.

Its voluntary administration process has revealed the outcome of an Australian Taxation Office determination that could be relevant to other gig companies.

We know this because of Foodora’s administrator’s report to creditors. The report notes ongoing warnings from the tax office to Foodora. Chief among the tax office’s concerns was that Foodora should have been collecting PAYG income tax and making superannuation contributions. It was on this basis that the administrator agreed Foodora had probably wrongly classified[8] its riders as independent contractors.

It is the tax office’s determination that could have the most far-reaching consequences for other platforms operating in Australia.

The determination and reasons for it are not yet in the public domain – due to “obligations of confidentiality[9]”. We can only speculate about the underlying rationale. However, based on existing case law[10] and tax compliance priorities[11], we suggest two critical aspects potentially expose other platforms’ operational models to the tax office’s compliance regime.

The first relates to the platform setting rates of pay and creating invoices on behalf of workers, which the platform then pays. Prior tax office actions[12] suggest recipient-created tax invoices lead to questions about the true nature of the contracting relationship. Foodora had such a mechanism. Deliveroo and Uber Eats have something similar.

The second is the demand that workers provide an Australian Business Number (ABN) and what this means for the contracting relationship[13]. The tax office is quite clear the ABN does not change the fundamental employment relationship.

This means the ATO is likely to scrutinise the particular arrangements a platform uses to classify workers as contractors.

That Foodora went into administration[14] before the ATO and Fair Work rulings could bite tells its own story about the platform economy.

Despite the mushrooming of different platforms across a range of sectors – from ride sharing to food delivery, hospitality and care work – serious questions remain about the viability and sustainability of platform companies. Uber, for example, lost US$4.5 billion globally in 2017[15].

In an environment where platforms ruthlessly compete for market share, profitability remains a key challenge.

Read more: How to stop workers being exploited in the gig economy[16]

Author Nick Srnicek in his book Platform Economy[17] warns that the ‘network effects’ associated with platform capitalism may lead to monopolies. This is the result of users flocking to the most used platforms while others fail.

Foodora may just be one of the first victims of increased market concentration in the food-delivery industry. Its demise reflects the evolving nature of the platform economy in Australia.

Given the continued popularity of the platform economy with consumers it is unlikely the above developments will spell the end of work organised and facilitated by online apps. However, this space remains fluid. There will be rulings on other platforms. There is talk of potential legal and regulatory reforms[18] to better protect workers in the gig economy. The issues of employment status and rights will not be settled any time soon.

In the meantime platforms are incentivised to do whatever they can to avoid the costs of employment relationships[19] as that increases their chances of benefiting from, rather than falling victim to, the drift towards monopolisation.