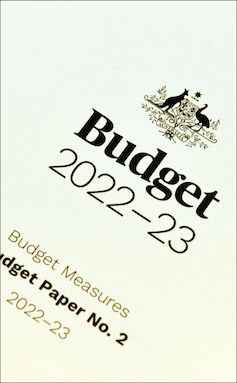 By convention, it is delivered two days after the budget.

It’s different when an election is imminent. Then it becomes a statement[1] of priorities about what the opposition would do differently if it wins government.

There is hardly ever a difference between government and opposition on the broad directions of spending and taxing – and for that matter, rarely much difference on tax and spending between one budget and the next.

The economic parameters are outside of government control - both government and opposition take the officials’ economic forecasts as given.

Opposition leader Anthony Albanese’s Thursday night speech in reply is no exception. Differences between the parties lie not in macroeconomic settings or in the amount of spending, but in what it is spent on.

The centrepiece is an aged care package[2] with five parts:

These are not new ideas. They come from the report of the Royal Commission into Aged Care Quality and Safety[4], which made a compelling case for reform.

The government said it supported most of the royal commission’s recommendations, but it has been slow to implement them.

Aged care is the one big difference

Notably, the government has so far declined[5] to support aged care workers’ pursuit of a 25% pay rise in a case presently before the Fair Work Commission[6].

Away from aged care, many of the other initiatives mentioned in Albanese’s speech have previously been announced – the Powering Australia Plan[7] for renewable energy, the Future Made in Australia[8] plan for manufacturing, funding for infrastructure, funding for training, and cheaper child care[9].

Labor says it will deliver a second 2022 budget.

Not all are points of difference. The Coalition announced similar measures in the budget, including more funding for training apprentices[10], and a package to boost manufacturing[11] and address supply chain vulnerabilities.

Five climate mentions instead of one

Treasurer Josh Frydenberg’s speech used the phrase “climate change” once. Albanese’s used it five times. It’s another point of differentiation, but not as big as it might be.

Neither side of politics has an explicit position on the links between climate change and natural disasters.

While it is too soon to draw those links with the latest floods[13], the broader[14] evidence that the increased frequency and severity of disasters is due to climate change is overwhelming.

This is going to be an increasing challenge for Australian communities, and one budgets will have to address.

Albanese’s speech will be vulnerable to the traditional taunt of governments facing proposals from oppositions: “where’s the money coming from?”

For much of Albanese’s speech there are easy answers. Some content has been announced previously and provision made; other elements are similar to government measures, even if different in implementation, so are covered by budget funding.

The biggest gap is in the plan to fix aged care. The government has been avoiding engaging on wages, due mostly to their cost.

Labor has costed its aged care package at $2.5 billion[15], plus the wage increases arising from the Fair Work Commission case. The wage cost is hard to estimate, but is likely to be huge. The biggest cost in aged care is wages.

It is worth noting whatever party wins government it will need to meet the costs arising from the Commission’s decision.

The required spending could be met by an increased deficit – that is, going deeper into debt. In a deficit forecast to be $78 billion next year, a few extra billion makes little difference.

Less likely - because of the negative headlines it would generate – is that Australians would be charged a levy for the proper provisioning of aged care, as has happened before for both Medicare and disability.

Another option is that savings could be made in other areas of spending, reflecting the priority placed on aged care.

Or perhaps, after huge additional spending on COVID response proved not only affordable but good for the economy[17], the question about “where the money is coming from” is losing its potency.

Whatever the case, if Labor wins the election, it will need a new budget.

Shadow Treasurer Jim Chalmers announced his intention to deliver a second post-election budget[18] in a speech to the Australian Chamber of Commerce and Industry in March.

Many of the specific initiatives have been announced previously. The largest new component by far, the aged care plan, is likely to attract widespread support.

Investments in education and training, childcare, renewable energy and infrastructure are all likely to have a positive return for Australia.

There are big differences in rhetoric between Labor and the Coalition, but on the economic fundamentals there is little - other than aged care reform - to separate the two.