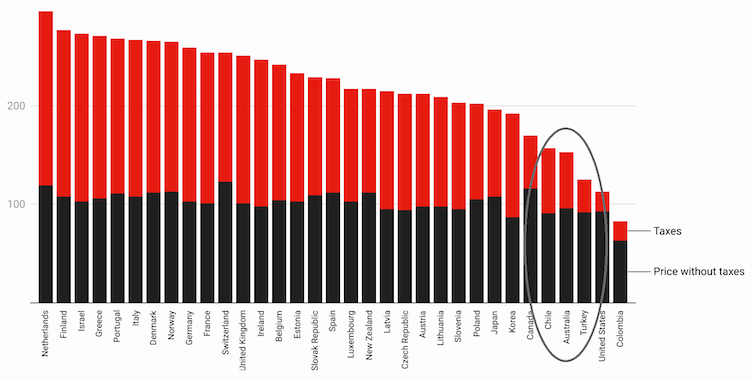 Cutting petrol tax to bring down the cost of living used to be the political version of a joke. Failed US presidential candidates John McCain and Hillary Clinton both tried it in 2008. Their bipartisan advocacy of a “summer gas tax holiday[1]” was derided as dumb[2], a turkey[3] and a “metaphor for the entire campaign[4]”.

Her opponent for her party’s nomination, Barack Obama, labelled it a gimmick[7] and went on to win both the nomination and the presidency.

But it isn’t a joke now. There’s talk about it in the US, New Zealand has just cut in its fuel excise 25 cents[8] to ease cost of living pressures, and Australia is considering a budget measure along the same lines[9].

If you fill up fortnightly, as many people do, the extra impost is greater than if the Reserve Bank lifted its cash rate by 0.25%[12] and pushed up the cost of payments on your mortgage.

If you own an SUV, by now Australia’s biggest selling[14] type of new car, the extra impost will be greater. And (as with interest rates) there’s every chance petrol prices will climb further.

In New Zealand, where petrol costs more than NZ$3 per litre[15] (A$2.80) the government has cut petrol excise by 25 cents per litre[16] for three months, in the hope that by then the worst effects of the Russia-Ukraine war will have passed.

Eagle-eyed readers will have noticed that even with the cut, New Zealand petrol prices will still be way above Australia’s. That’s because, like most[17] developed nations, New Zealand charges more in tax for using roads than does Australia.

The goods and services tax charged on top of that in both nations brings the NZ excise to about NZ$0.89 per litre (A$0.83) compared to Australia’s A$0.48.

If these figures sound low, it’s because the price of petrol has soared. One of the peculiarities of taxes that are set in cents per litre (climbing only with inflation) is that when the petrol price jumps, the tax as a proportion of the total price shrinks.

If we abolished fuel excise altogether, cutting the Australian unleaded price 22%, we would only bring the price back to where it was five weeks ago[21].

And then (as I imagine will happen in New Zealand after three months) the government would find it hard to reintroduce it.

It is finding it difficult to end the $1,080 low and middle earner tax break that was meant to finish two years ago[22].

The mess it has got itself in to both by hinting that it will cut the excise[23] and by not ending the A$7.8 billion per year low and middle earner offset hints at a way out.

The offset is poorly designed. It is paid out as a tax refund after the end of each financial year, making it the opposite of the “stimulus measure[24]” Treasurer Josh Frydenberg said it was when he last extended it. If he extends it again for the coming financial year, it won’t get paid out until the second half of 2023.

Read more: This pointless $1,080 tax break should have ended years ago – but has become hard to stop[25]

The petrol component of the fuel excise brings in A$5.8 billion[26] per year. The government might be able to hang on to that and use the A$7.8 billion[27] that would have been spent on the offset to support people now when they need it and when petrol prices are high, rather than a year into the future when they might not be.

The A$7.8 billion would be directed to Australia’s lowest earners, the ones who are being hit hardest by the horrendous petrol prices. Low earners (the bottom 40%) on average spend more than 3%[28] of their income on petrol. High earners spend less than 2%.

Support shouldn’t be tied to petrol use

If it was delivered as a petrol subsidy it would go disproportionately to the highest earning households for whom high petrol prices are a mere annoyance. High income households spend more on petrol in absolute terms (on average 50%[29] more) than low income households.

If it is delivered as cash rather than a petrol subsidy it won’t blunt the push that high prices give for people will switch to more efficient cars[31] and use petrol less by doing things such as working more from home.

It’s hard to find a case for a cut in Australia’s petrol tax, but it is easy to create a mechanism to help the people high prices are hurting. The budget is due in a fortnight.