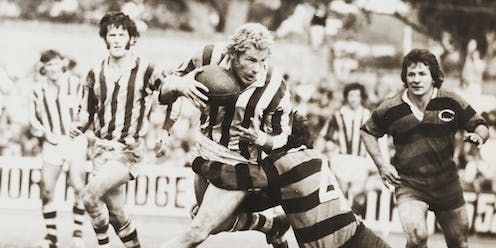 Monday 13 December marks the 50th anniversary of a decision by the High Court of Australia that fundamentally altered the playing field for professional athletes in this country.

The case concerned 25-year-old rugby league star Dennis Tutty, who wanted to be freed from playing for the Balmain Tigers, to whom he was tied under the NSW Rugby League’s “retain and transfer” rules.

The ruling[1] is “one of the more important human rights decisions of the High Court”, according to noted industrial relations academic Braham Dabscheck[2].

He ranked it among a handful of formative legal cases globally to do with economic and employment freedom in professional team sports. It has been cited in hundreds of Australian court cases involving football, cricket, rugby union, Aussie rules and hockey players.

In essence the High Court ruled professional athletes could not be treated as indentured labourers. They had the right, like other workers, to pick their employers and negotiate contracts freely.

However, the modern professional rugby players’ claim to equal human rights still isn’t quite the same as other employees, as more recent events have shown.

But he was aggrieved by what he considered to be a lack of recognition (and money) at Balmain. At the end of the 1967 season his contract with the club expired, and he was put on its “retain” list. He would have to play for what the club was prepared to pay, or not play at all.

Effectively he was bound to the club a bit like a serf to the land. The NSW Rugby League’s rules precluded him from negotiating a new contract with Balmain or with another club.

Tutty thought that was unfair. He decided to sit out the 1969 season and initiated legal action in the Supreme Court of NSW against the Balmain Tigers and the NSW Rugby League to set aside those rules.

The Supreme Court heard the case in May 1970 and handed down its decision in October 1970, in Tutty’s favour. NSW Rugby League, through its then president Bill Buckley, then appealed to the High Court.

This was the first case involving rugby league to come before the High Court. Led by Chief Justice Garfield Barwick, five judges heard the competing arguments over several days in April and May 1971.

Tutty’s lawyers argued the player contracting rules amounted an unreasonable restraint of trade. NSW Rugby League argued it was a voluntary association whose rules had no contractual effect, that its rules did not restrain trade, and if they did it was no more than was reasonable.

The High Court agreed with the lower court. The ruling is close to 10,000 words long but its essential point was that the rules binding Tutty to Balmain were “a restraint of trade which is unreasonable and unjustified”.

In the past 50 years Buckley v Tutty has been cited in more than 200 decisions by Australian courts, including every state and territory supreme court.

But one case the ruling hasn’t positively affected is the 2019 Federal Court proceedings brought by St George Illawarra player Jack de Belin against the Australian Rugby League Commission (ARLC), the governing body of the National Rugby League. (The NRL is the elite competition successor to the NSW Rugby League.)

The NRL had stood down de Belin in February 2019 (with pay from his club) after it introduced a “no-fault stand-down[4]” policy for players charged with serious criminal offences. This followed police charging de Belin (and a friend) with aggravated sexual assault in December 2018.

De Belin maintained the sexual encounter with the woman was consensual. His lawyers argued that the NRL standing him down was an unreasonable restraint of trade, because it went further than was reasonably necessary to protect the legitimate interests of the NRL, was imposed for an indefinite period, was done in retrospective way, and de Belin had no opportunity to make submissions or appeal.

He lost that case, with the Federal Court’s Justice Melissa Perry ruling[5] in May 2019 that the stand-down rule went no further than was reasonably necessary to protect the legitimate interests of the NRL and ARLC.

The first of four reasons Justice Perry gave for why the NRL and ARLC had grounds to regard de Belin’s playing as a “clear and present danger to the legitimate interests” of the ARLC and the NRL was:

“while mindful of the presumption of innocence, an ordinary reasonable member of the public is likely to conclude from the fact that Mr de Belin has been charged with a serious offence that he is a person suspected by the police of having committed the offence and that the police have reasonable cause for laying the charge against him.”

You could be forgiven for interpreting this as saying that while the presumption of innocence until proven guilty is enshrined in the United Nations Universal Declaration of Human Rights, the fact people might suspect de Belin was guilty was enough grounds for the NRL to stand him down.

Read more: Footy crowds: what the AFL and NRL need to turn sport into show business[6]

De Belin ultimately had all charges against him dropped in May 2021[7].

We may not think of professional athletes as being just like other workers, but should that mean the fundamental right to a presumption of innocence is trumped by the primacy of the commercial rights of a governing body?

To resolve that question we may need another Dennis Tutty to take the matter all the way to the High Court.