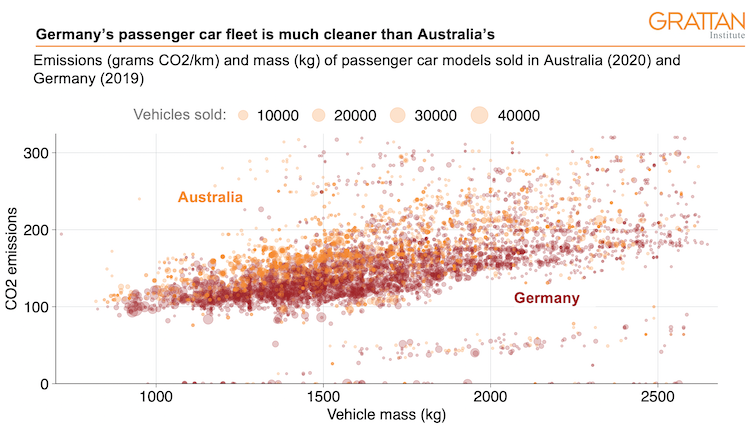 The federal government’s mantra of “technology, not taxes[1]” has left it with few options to easily reduce carbon emissions.

In many sectors of the economy, it’s a recipe for disaster — a vague slogan that keeps us waiting.

But for all its flaws, relying on technology points us in the right direction in at least one field — reducing emissions from cars.

Light vehicles are responsible for 11% of Australia’s carbon emissions.

As it stands, Australia is way behind the pack. The lowest-emitting variants of the top-selling models in Australia are more emissions-intensive than the models available overseas.

Eighty per cent of the world imposes a carbon dioxide emissions standard, or ceiling, on new light vehicles, applied across the offering of each manufacturer.

The US, the UK and Europe all have ceilings that tighten over time, bringing down average emissions. If manufacturers breach the ceiling, they face fines.

Australia has no such standard, although it regulates other pollutants[4] including nitrogen oxides and particulate emissions, but to a weaker standard than much of the rest of the world because our petrol is of poorer quality.

That’s much higher than in comparable countries. New passenger cars sold in Germany, for example, are similar to Australia’s in weight, yet emit significantly less carbon dioxide per kilometre.

Plenty of excuses are offered for Australia’s poor performance when it comes to vehicle carbon dioxide emissions; among them the fact that we drive large cars and that the quality of our petrol is poor. But our bigger problem is the absence of a carbon dioxide emissions ceiling. We are not proposing a tax. A carbon dioxide emissions ceiling comes as close as possible to mandating better technology while sticking to the Government’s pledge of not telling people “what cars to drive[5]”. A ceiling is not a tax The ceiling should come into force no later than 2024 at 143 grams of carbon per kilometre (g/km). It would tighten to 100g/km by 2027 and 25g/km by 2030. Carbon emissions from new vehicles under the ceiling would fall to zero by 2035. To ensure it works Australia should adopt the Worldwide Harmonised Light Vehicle Test Procedure[6] and new vehicles sold should include on-board vehicle emissions monitors by 2024, with de-identified data released publicly. Read more: Going electric could be Australia’s next big light bulb moment[7] The change could save almost 500 million tonnes of carbon dioxide by 2060. By 2030, the savings would make up at least 40% of what’s needed to reach Australia’s 26% cut in emissions target — which would be a good start to achieving net zero emissions by 2050.

It would save drivers money The change would leave drivers better off financially. It would probably increase the price of new vehicles slightly, but make them cheaper to run. The average Australian driver would save almost A$1,000 within five years of buying a new car. It wouldn’t mean the end of the weekend[8]. But it would change the balance of options available. There would be more low-emissions and zero-emissions vehicles, and a smaller offering of higher-emitting vehicles. In the leadup to 2035 as more people switched to electric vehicles, there would be space under the ceiling for manufacturers to sell higher-emitting varieties to those who need or prefer them. Read more: China is on course to build the best cars in the world[9] In the UK, where there is a strong ceiling, consumers can choose from about 130 electric vehicle models across a range of prices. Here, there are just 31 models available, few affordable to everyday Australians. What we are proposing is a meaningful step towards net-zero at negligible cost to taxpayers. It would save drivers money, increase the range of cars on offer and cost the government little more than the cost of administering the scheme. References^ technology, not taxes (www.pm.gov.au)^ Grattan Institute (grattan.edu.au)^ Top economists call for measures to speed the switch to electric cars (theconversation.com)^ other pollutants (www.infrastructure.gov.au)^ what cars to drive (www.abc.net.au)^ Worldwide Harmonised Light Vehicle Test Procedure (www.wltpfacts.eu)^ Going electric could be Australia’s next big light bulb moment (theconversation.com)^ end of the weekend (www.abc.net.au)^ China is on course to build the best cars in the world (theconversation.com)Authors: Marion Terrill, Transport and Cities Program Director, Grattan Institute